It is an unlucky number, or at least “13” was for the Caps.  Week 13 was the first week this season in which the Caps had a losing week, a week with a points percentage under .500.  And frankly, it could have been worse but for a rookie goaltender who gave the Caps a chance for a comeback to earn the two points they posted for the week. 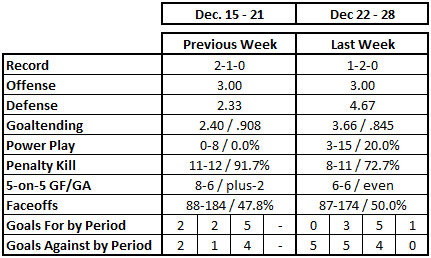 Until Week 13, the Caps went 22 weeks dating back to last season with one inconsequential week in which they failed to earn half the standings points available to them (1-2-0 in the last week of the 2018-2019 regular season).  Over that span, the Caps were 47-15-7, the most wins in the league and the second-highest point total over that span (101), trailing only the St. Louis Blues (102), who played one more game over that period. 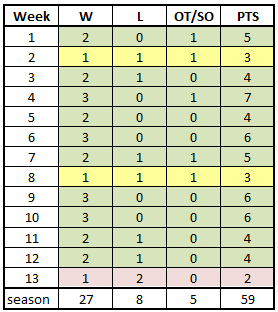 The Caps spread things around on offense in Week 13. That is the good news.  Eight different players accounted for the total of nine goals for the week.  The trouble was, seven of them recorded a single goal.  Alex Ovechkin was the only player to post two goals for the week, bringing his career total to 682, two short of Teemu Selanne for 11th place on the all-time list of NHL goal scorers.

As much who did score goals, the problem was who did not.  Jakub Vrana was blanked for the week, bringing his streak of games without a goal to nine.  It might be a sign of his importance to the Capitals’ offensive scheme that in those nine games, the Caps are only 5-4-0.  It is worth noting in that context that the Caps have not lost a game in regulation in which Vrana scored a goal this season (9-0-2).

The Caps had 15 skaters record at least one point in Week 13, Brendan Leipsic and Nick Jensen the only players dressing for all three games who did not record a point.  Ovechkin (2-1-3) and John Carlson (0-3-3) led the team with three points apiece, while seven other Caps contributed two points apiece.  They just could not outscore the shortcomings at the other end.  Ten of those 15 skaters finished the week with minus ratings, four of them with minus-5 or worse: Ovechkin (minus-7), T.J. Oshie (minus-7), Lars Eller (minus-6), and Nicklas Backstrom (minus-5).  The painful part of that was that the Caps dominated shot totals for the week, averaging 11 more shots on goal per game (35.7) than the three opponents (24.7), the third-highest shot differential in the league for the week.

Those 24.7 shots allowed per game by the Caps was the lowest in the league for the week, dropping them to 30.2 shots allowed per game for the season, seventh-fewest in the league at the end of the week.  They held all three opponents under 30 shots, extending their streak of games holding opponents under 30 shots to seven, their longest streak of the season and the longest such streak in more than three years, since they had a seven-game streak in Games 2-8 in the 2016-2017 season.

The shot attempts allowed were good and bad.  Even in the same game.  For instance, there was the opening game of the week in which the Caps allowed the Boston Bruins only 17 shot attempts at 5-on-5, the low in attempts allowed for the season for Washington and the low in attempts made by Boston for the season.  On the other hand, this might be explained away as score effects, the Bruins jumping out to a 4-0 first period lead and coasting in from there.  The Caps did have a plus-29 attempt advantage in that game when trailing.

The Caps did finish the week plus-34 in 5-on-5 shot attempts, but almost all of it (plus-32) came with the Caps trailing in games.  The Caps were “even” in shot attempt differential when leading, but that was the product of no shot attempts for or against when leading, the Caps only lead of the week coming when they scored in overtime to beat Columbus in the middle game of the week.

Week 13 was a tale of two goaltenders that one can think of in terms of it being one chapter in a story that spans the season.  And in this chapter one could not help but harbor a sense of foreboding.  Ilya Samsonov got the middle game of the week, and but for his effort, stopping 27 of 28 shots in 63 minutes of work, it would have been a winless week for the Caps.  That he won on home ice was a bit unusual, it being only his fifth start on home ice among his 12 starts this season.  Nevertheless, it was the seventh time in 12 starts that the rookie netminder allowed two or fewer goals.  He finished the week with the second-highest number of wins among rookie goalies (10, trailing New Jersey’s MacKenzie Blackwood with 11) and the best goals against average (2.28) and save percentage (.918) among rookie goalies appearing in five or more games.

For Braden Holtby, one had to think of a glass being half full or half empty.  The half empty part was that it was an awful week for the veteran.  An 0-2-0 record, 6.78 goals against average, .769 save percentage, and he was pulled after one period against Boston.  It extended his slump to four games, over which he is 1-3-0, 4.01, .851.  The glass half-full way of thinking about this is that the recent struggle is reminiscent of how he ended the 2017-2018 regular season in which he posted a record of 6-6-0, 3.67, .881 in his last 12 appearances before sitting to begin the first two games of the postseason in favor of Philipp Grubauer.  Caps fans will remember that he turned things around quite effectively after that.  Still, one cannot help but wonder if his pending free agency isn’t at least having some effect, even on a subconscious level, on his play.

The Caps managed 30 shots on goal on the man advantage in 26:53 of power play ice time.  The shots were spread around, Alex Ovechkin finishing with eight (one goal), Evgeny Kuznetsov with six (one goal), and T.J. Oshie with four (one goal) along with Lars Eller. 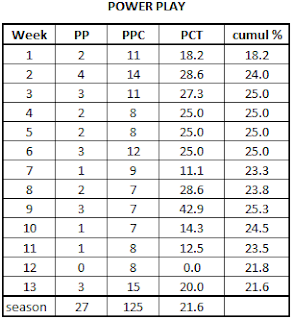 More than the “how many” was the “when” with respect to the penalty kill and the goals allowed in Week 13.  The Caps opened the week allowing a power play goal to the Boston Bruins in the sixth minute of their game, and then they allowed another with 63 seconds left in the first period to fall behind, 4-0, a hole too deep out of which to climb.

The Caps did the same thing to open their game against Carolina, allowing the game’s first goal on a power play in the 11th minute to give the Hurricanes a lead they would never relinquish, despite the Caps shaving a two-goal Carolina lead to one goal three times before losing, 6-4.  The timing of failure on the penalty kill, as much as anything else, contributed to the losing week.

Then there is the sheer volume of shorthanded situations faced.  Week 13 was the tenth week in 13 that the Caps went shorthanded ten or more times.  No team in the league at week’s end was shorthanded more often than the Caps for the season overall (144).  That the Caps allowed only 22 goals when shorthanded (tied for 12th fewest) might be seen as a victory in the face of self-inflicted damage.

The Caps’ penalty killers did an adequate job of minimizing shots, allowing only eight shots on goal in 15:57 of shorthanded ice time.  However, three goals on eight shots more or less negated the effects of low shot volumes. 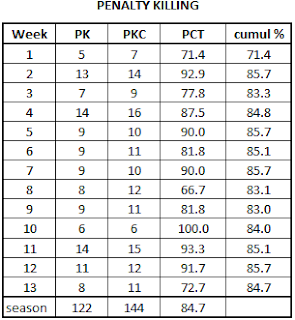 Ugly starts make for ugly finishes, and that certainly was the case for the Caps in Week 13.  Outscored 5-0 in the first periods of games, three empty net goals in the third periods of games made for book ends to a week that resembled gargoyles.  The Caps did outscore opponents by a 6-4 margin in the third periods and overtime for the week, but only the two goals scored against Columbus – one in the third period, the other in overtime – were of consequence, the other four being cosmetic (two against Boston) or reflecting frustration (two against Carolina to try to cut into a lead they always fell just short of eliminating).  It left the Caps with an odd pattern at week’s end.  There is the ten-goal progression through the periods in goals scored – 35 in the first, 45 in the second, 55 in the third (the last being most in the league), but allowing 43 third period goals when they allowed only 35 in each of the first two periods is something that merits attention. 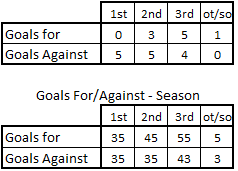 The Caps slipped a bit in the year-to-year comparisons, but this year’s team still maintains a healthy edge over last year’s squad in most respects after 40 games.  If there is something odd about this comparison at this point it is the disconnect between outcome and the underlying numbers.  The Caps have realized a net 164 shot improvement (year to year differences in shots versus shots allowed) and a net 189 attempt improvement in shot attempts at 5-on-5, but the scoring, for and against, does not reflect the improvement, the Caps being only plus-2 at this point in goals scored over the same point last year and only a plus-2 in goals allowed, year-over-year. 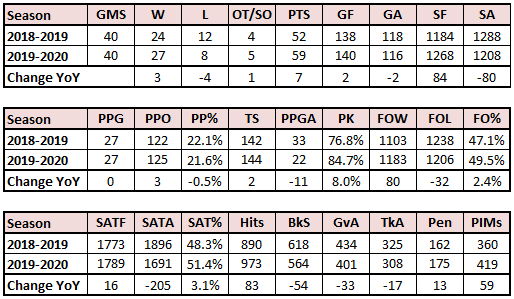 Over an 82-game season there will be ups and downs, ebbs and flows.  The Caps slipped a bit in the week just completed, but they remain a formidable team, both in the context of this year’s competition around the league and in comparison with themselves a year ago.  They have had to deal with injury and illness over the last week, but these are issues any team is going to have to face over the 82-game schedule.  That the Caps have completed almost half of their regular season schedule without losing consecutive games in regulation speaks to the strength, depth, and resilience of this team, virtues that will be tested as the team moves into the new year.