And then we celebrated in our own way, with a post-game pepperoni, anchovy, and marshmallow fluff pizza.  And, as always happens, the fluff made for some interesting dreams.  We had visions of Mr. Miyagi bestowing his timeless advice to Daniel LaRusso on hockey…

[makes skating gestures with each leg]

Daniel: Hey - you ever get into fights when you were in pee-wee?

Daniel: Yeah, but it wasn't like the problem I have, right?

Daniel: Yeah, but you knew karate.

Daniel: You mean there were times when you were scared to fight?

Daniel: So, karate's fighting. You train to fight.

Miyagi: That what you think?

Miyagi: Then why train?

Daniel: [thinks] So I won’t get five minutes for kin geri.*

Miyagi: [laughs] Miyagi have hope for you.

Miyagi: Ice hockey come from Europe, 18th century, called shinny, "something Scottish player yell when he steps in a hole." Hundred year later, Miyagi ancestor…other side of family…bring to Canada, call “hockey”… played with corks from barrels of “hock” ale.

Daniel: I thought it came from Russia and stuff like that.

Miyagi: You too much Ovechkin.

Daniel: No the problem is, I'm getting my ass kicked every other day, that's the problem.

Miyagi: Hai, because boys have bad attitude. Karate for defense only.

Daniel: That's not what these guys are taught.

Miyagi: Hai - can see. No such thing as bad player, only bad coach. Coach say, player do.

Daniel: Oh, great, that solves everything for me. I'll just go down to the other bench straighten it out with the coach, no problem.

Miyagi: Now use head for something other than target. 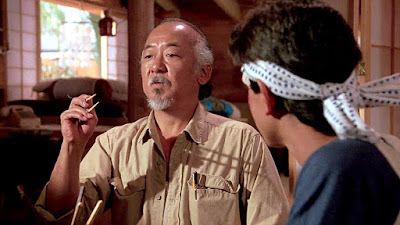 Miyagi: Man who catch puck with chopstick accomplish anything.

Daniel: Ever catch one?

Posted by The Peerless at 9:05 AM No comments: