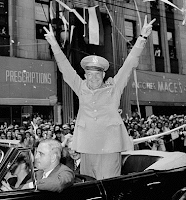 The Washington Capitals took care of business in a businesslike way on Tuesday night, defeating the Toronto Maple Leafs, 4-1, at Air Canada Centre in Toronto.  The Win put the Caps on the brink of clinching their third Presidents Trophy in team history and left the Maple Leafs sitting in the second wild-card position, where they could face the Caps in the postseason.

The teams appeared headed to a scoreless first period when the third line engaged in some nifty cycling in the left wing circle, capped with a one-timer by Lars Eller off a feed from Andre Burakovsky that beat goalie Curtis McElhinney to give the Caps a 1-0 lead 14:34 into the period.

Mid-way through the second period the Caps doubled their margin on a power play.  T.J. Oshie and Alex Ovechkin played catch with the puck at the perimeter, and when Oshie too a return pass from Ovechkin, he sent it across the ice to Kevin Shattenkirk in the left wing circle.  Shattenkirk one-timed the puck past McElhinney’s right pad, and it was 2-0 at the ten minute mark.

In the third period, Nate Schmidt provided some insurance when he caught the Leafs paying too much attention elsewhere.  Justin Williams wrapped a pass around a Leaf defender down the left wing wall to Brett Connolly in the corner to the right of McElhinney.  With the Leafs paying attention to what Connolly might do, Schmidt darted down the middle into open ice.  Connolly found him with a well-placed pass, and Schmidt corralled it, snapping a shot past McElhinney at the 8:11 mark to give the Caps a 3-0 lead.

Tom Wilson added a goal late when he got behind the Toronto defense and ran down a pass that Daniel Winnik lobbed into open space.  In alone on a break, Wilson pulled the puck to his backhand and slipped it between McElhinney’s pads to make it 4-0, 16:44 into the period.

Toronto ruined Philipp Grubauer’s shutout bid on a power play in the last two minutes on a Mitch Marner goal, but it was too little, too late, and the Cap skated off with the 4-1 win.

-- Every Capital finished with at least one shot on goal except for Daniel Winnik, who nonetheless contributed an assist to the effort.

--  Nate Schmidt has a bit of an odd streak going.  His goal was his second in two games, three weeks apart.  He scored a goal in his last appearance, a 4-2 win over the Minnesota Wild on March 14th.  He was also a plus-3 in this game.

-- That Schmidt was in the lineup at all was a product of John Carlson unable to go due to a lower-body injury.

-- Jay Beagle had an assist.  That makes the Caps 22-3-1 this season when he recorded at least one point.

-- The Caps stopped Auston Matthews’ five-game goal and eight-game points streaks, shutting him out with only one shot on goal.

-- In allowing just one goal, Philipp Grubauer had his stingiest performance over a full game since he shut out the Los Angeles Kings, 5-0, back on February 5th.  It was the first time he faced a shot on goal in a game since he beat the Colorado Avalanche, 5-3, on March 29th.  He did not face a shot in 6:48 of ice time in the Caps, 6-3 loss to the Arizona Coyotes on March 31st.

This was a game, quite literally, men against boys.  Toronto is a very talented, but very young team.  As such, they are prone to inconsistency, of nights when they just can’t convert their skill into results, and they do not yet possess the experience to be able to grind out games consistently in those situations.  The Caps just took care of business, out-shooting the Leafs, 13-3, in the first period and applying consistent, smothering pressure thereafter.  It made for a game that was not in much doubt, start to finish.  If Washington can play such a game consistently, they will be a very hard team to beat in a multi-game series.  If Toronto is the first team up for the Caps in the postseason, they were delivered a message.  For them, not a pleasant one.