The Peerless Prognosticator is ON THE AIR!!! -- Caps vs. Wild, November 13th

My, but this season is zipping by quickly. We are almost to the quarter pole of the regular season, and there are times like these, as the hustle and bustle of the holidays is about to descend upon us, that we wish we could forsake the supersonic pace of life and just take the bus. Like an old friend of ours who happens to be in town for tonight’s game between the Minnesota Wild and the Capitals at Verizon Center. Coach Madden, it’s been a long time.

So how’s retirement treating you these days?

I think that’s pronounced “we,” coach.

So what brings you to town for a game between the Caps and the Wild, Coach?

“Oh, yeah… we moved to California when I was a youngster, but I was born in Austin.”

Where is that, exactly, Coach?

“Well, you take 270 north this way –fwip!- then you pick up 70 going west like this -schwip!- …then you do a little spin to I-76, hit the hole here when you pick up I-80 –bonk!- then it’s clear sailing until you get to Chicago, then you hit off right tackle up I-90 past Madison and LaCrosse, then you do this little zig-zag toward Iowa, and THWAP!... you’re in Austin.”

We’ll take your word for it, Coach. So what are you looking forward to tonight?

"That’s too bad. Whenever I hear his name, I think of that honey dipped chicken we get on the bus when we’re on a trip… that’s good eatin’, Peerless."

Well, from the looks of you, you’d know a lot about good eatin’.

“Heh-heh-heh… you’re right there, Peerless, but then again, I’m from Austin.”

“Know what our town’s nickname is?"

Well, let’s hope that the Caps don’t play like processed and cooked pork shoulder and ham products tonight, just because the Wild are dead last in the Western Conference. It’s been a difficult start to the season for the Wild, as the numbers indicate… 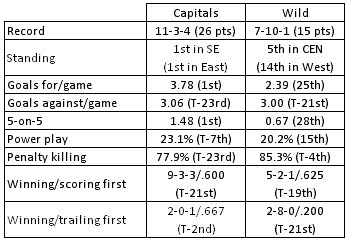 But the Wild are also owners of a modest two game winning streak and are winners of four of their last five outings, having found their inner “Lemaire.” That would be a reference to the only coach the club knew until this season – Jacques Lemaire – who now patrols the New Jersey bench and was a purveyor of the defense first, second, and always style of play. Going into last night’s play – Minnesota was playing the Lightning in Tampa – the Wild allowed two or fewer goals in four of their previous five games (all of them wins), and that includes a 2-1 win in Pittsburgh against the defending Stanley Cup champions.

But if you’re looking at history, look no further than the player with one of the great names in the sport – Cal Clutterbuck. He has only one career game against the Caps, but for him it was memorable. He has the only two-goal game of his 92-game career in a 4-3 Wild win over the Caps in November 2008. He’s likely to make a bigger impression, so to speak, in the physical aspects of the game. He leads the team in hits with 50 in only 12 games.

There is a certain itinerant quality to the Wild roster. The well-traveled group includes a few players who have had some success against the Caps. Andrew Brunette – a former 7th round draft pick of the Caps – has abused his former employers to the tune of 8-5-13 in 19 career games. He is also the Wild’s second-leading scorer at 7-5-12 in 17 games.

Owen Nolan, who has been around the NHL block a few dozen times, has logged more time against the Caps than any player on the Wild roster – 34 games. In those contests he has 11 goals and a dozen assists.

The worst would belong to Brent Burns, who is minus-13 so far, which would put him on a pace to go minus-63. Burns is coming off a year that saw him miss the last 19 games of the year with post-concussion symptoms). He has been slow out of the gate for the Wild so far, although he does have three assists in this latest 4-1-0 run by Minnesota.

1. Focus on five. If there is a persistent theme for the Wild it is their difficulty at even strength. Their 28th place ranking in the league’s 5-on-5 list goes hand in glove with the fact that the Wild have only two players on the plus-side of the ledger (Cal Clutterbuck and John Scott). The Wild have four of the bottom 13 players in the league in plus-minus. The Caps are the top 5-on-5 team in the league. Do the math.

2. No peeking. This is the first of a back-to-back for the Capitals, who will travel to New Jersey on Saturday. The double whammy lurking for the Caps is that this isn’t a team they see much of so that they can get a book on them (added to the fact that this is a new coach with a new system), and the Wild – on paper – are very much a struggling team, even with their recent run. The exasperating tendency to play hot and cold within the same game could bite the Caps.

3. Vitamin C. Nicklas Backstrom – the Backstrom in this game with the “C” in his first name – is quietly putting together quite a season. He is on a 100-point pace, and after a six-game “slump” in which he had only one assist, he is 2-9-11, plus-2, in his last eight games.

“Well, if you start here, then cut over here like this, -SCHWAP!- then dart back this way and curl around like this, -bonk!- you’ll end up here…”

* We’re not kidding about that.
Posted by The Peerless at 6:11 AM No comments: