As if there was a question...

For a combination of analysis, coverage of the club, and an encyclopedic link to all things Caps, there is no equal to Japers' Rink. It is the platinum standard in sports blogging, the most valuable resource a Caps fan can have in any media.

Congratualtions, folks.  A win well earned and well deserved.
Posted by The Peerless at 7:07 AM 1 comment:

Young Guns, One and All -- Part 7: The Playoffs in the Playoff Era

Having spent six editions of this looking at a variety of regular season performance elements for the “Young Guns,” it is time at last to look at the playoffs. And what a curious set of numbers there is. Starting from the ground up, there is the matter of what relationship there might be between any of the Young Guns – Alex Ovechkin, Nicklas Backstrom, Alexander Semin, and Mike Green – scoring and the Caps performance in wins and losses. Over the last four seasons of the playoff era, here is what happens when any of them either score goals or register points: 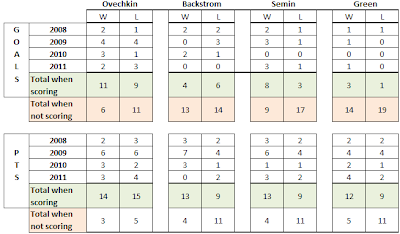 The first number that leaps off the screen, at least when you add two of them together, is “20.” An amazing number, that – it is the total number of playoff games (out of 37 total) in which Alex Ovechkin scored a goal. By way of comparison – the usual comparison in such things – in his last four playoff appearances Sidney Crosby scored goals in 24 games…out of 62 total games played. You can say Crosby is not (at least until more recently in his career) a goal scorer, but the comparison even extends to points recorded. While Crosby has recorded points in 41 of 62 playoff games (66.1 percent), Ovechkin has done so in 29 of 37 post-season games (78.4 percent). If you are inclined to think Ovechkin has not carried his share of the load in playoff games, think again. And when you consider that the Caps are only 11-9 in games in which he scored a goal and 14-15 in games in which he recorded at least one point, he’s been carrying the load of others as well.

When Nicklas Backstrom scores a playoff goal, it hardly seems to have mattered a great deal. The Caps are 4-6 in games in which he lights the lamp, 13-14 when he leaves it dark. Points? That is another matter. The fact that he has recorded points in 22 of 37 games is impressive enough, as is the 13-9 record for the Caps when he does so. But consider that he played the 2011 post season while tending to an injured hand, not an insignificant matter for an offensive player. Before this past post-season, Backstrom recorded points in 20 of 28 games (a 71.4 frequency rate that compares favorably with Ovechkin), and the Caps’ record in those games was 13-7. When Nicklas Backstrom is spreading things around, the Caps have been very successful. Common sense confirmed.

As Alexander Semin goes, so go the Caps to a substantial degree in the playoffs. In four post-seasons Semin has scored goals in 11 games, and the Caps are 8-3 in them. It is worth noting that in the four series that the Caps lost over these four years, Semin scored a total of four goals in four games out of 25 total games played in those series, and he has one goal in his last 19 games of series the Caps ultimately lost. Part of the problem is that the occasional explosiveness Semin has displayed in scoring goals has not manifested itself in the post season. He has one multiple-goal game in his 37-game playoff career. This is not to make a scape goat of Semin, but to underline his importance to the Caps’ success in the post season.

Semin’s relationship to wins and losses extends to points scored. The Caps are 13-9 when he recorded at least one point, 4-11 when he did not. It is the same split in wins and losses when recording or not recording points as that of Nicklas Backstrom. And it has been a consistent effect: 3-2 in 2008, 6-4 in 2009, 1-1 in the forgettable Montreal series in 2010, and 3-2 last spring.

What has been striking about Mike Green’s individual numbers over the past four years is their being photo-negative of those of Alex Ovechkin. One of the most prolific goal-scoring defenseman of the past four regular seasons, Green has five goals scored in four playoff games out of 35 in which he played. That is a goals-per-game rate (0.14/game) barely half of his regular season rate over the same four seasons (0.28). He has one goal in his last 23 playoff games played. Much of that can be attributed to injury, whether a product of the relentless forechecking applied to him (2009) or from effects of injuries sustained in the regular season (2011). Nevertheless, a player who poses enough of a threat from the blue line to give his cohorts some additional room to word coming up dry in the post season leaves his cohorts having to pick up more of the burden with perhaps less time and space with which to work.

The lack of goal-scoring for Green probably overshadows the fact that he has scored points at a more reliable pace (21 games with points, compared to 22 for Backstrom and Semin), and the Caps have been successful as a result (12-9). 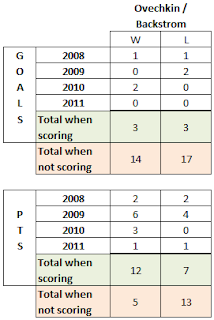 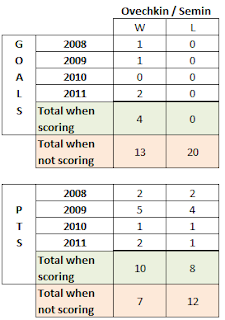 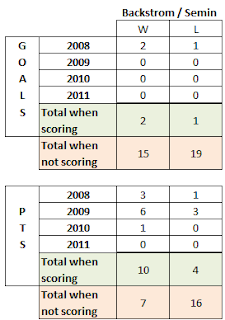 Although one might be struck by the infrequency with which any of the pairs score goals in the same game, when the three forwards are looked at as a group, two things are clear. One, they don’t often all get on the same page scoring goals – once as a matter of fact, back in 2008. But second, as far as recording points is concerned, it is plain that as the Ovechkin/Backstrom/Semin group goes, so go the Caps in the post season. It just does not happen often enough: 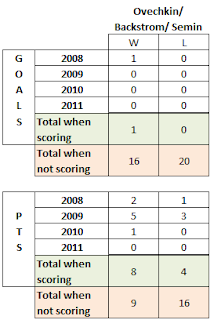 Even Mike Green, who has not enjoyed the same success in the post season that he has had in the regular season, drags the group down in terms of their relationship of scoring to wins and losses: 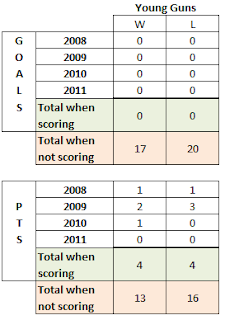 In the end, the Young Guns have been able to translate scoring into wins in the post season. When they score – individually or as a group (save for Green) – the Caps win more often than not. One could argue that they do not do it often enough, but there is the matter of stiffer competition in playoff hockey. Still, it is another piece of evidence that the Caps just have not gotten enough from the rest of the roster to push them deeper into the playoff tournament over these past four years.

With the addition of players such as Jeff Halpern, Joel Ward, and Roman Hamrlik, and perhaps a healthy Dennis Wideman, the Caps might have the more productive support from down the roster to get them to games in June instead of golf in May. But that doesn’t absolve the Young Guns. The best players have to play like the best players on a consistent basis. If they do not, then the occasional contributions from the rest of the roster might not matter too much. It is their team now.
Posted by The Peerless at 6:26 AM No comments: