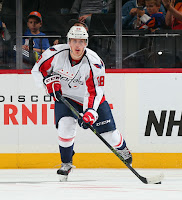 Now, as the 2015-2016 season is about to begin, Schmidt finds himself holding a roster spot with the Capitals, where he is penciled in as a defenseman on the third pair, likely with Dmitry Orlov.  The achievements along the way have been modest, but not insignificant.  At Minnesota, Schmidt was 12-62-74 in 96 games and was a first team selection for the Western Collegiate Hockey Association all-star team in 2013.  With the Bears, he was 6-19-25 in 65 regular season games and added four goals and seven assists in 13 postseason contests.  With the Caps, he was 3-7-10 in 68 games.

What he has not yet had with the parent club, though, is the chance to play a full season, to finish the season on the ice with the Caps.  In 2013-2014, the NHL portion of his season ended in late January, and last season it ended in late March.

Last season was a difficult one for Schmidt.  Well, perhaps not so much “difficult” as “uneven.”  He started the season in Washington and was, in fact, in the Opening Night lineup against the Montreal Canadiens.  He struggled, though, at least in the offensive end of the ice, not recording a point in his first 14 games despite averaging almost 15 minutes a game in ice time.

While Schmidt was never able to get much traction in the offensive end, recording only two points in his first 18 games, problems at the other end started creeping into his game thereafter.  His ice time started to be scaled back in early December, eventually cut back to 9:45 in ice time, his low for the season, in the Caps’ last game before Christmas, a 4-2 loss to the Rangers in New York.

Schmidt appeared in one more game before being reassigned to Hershey in the AHL in January, then was called up in March to appear in six more games before being sent back to Hershey in late March, ending the Capitals portion of his season.  After that 18-game start in which he had just two points but was a plus-8, he played his last 21 games to a 1-1-2 scoring line, but a minus-10, finishing the season 1-3-4, minus-2 in 39 games overall.

In small sample sizes (29 games in 2013-2014 and 39 games in 2014-2015) Schmidt has been a good possession player: 50.6 percent Corsi-for at 5-on-5 in 2013-2014 and 53.9 percent in 2014-2015.  Moreover, he was rather consistent in this regard.  He was at or above 50 percent in 28 of his 39 games last season and only once was he under 50 percent in consecutive games, a back-to back set against Chicago and Carolina in which he finished at 21.1 percent and 44.8 percent (all numbers from war-on-ice.com).  He was virtually unchanged in close-score situations, where his Corsi-for percentage at 5-on-5 was 53.7 percent last season, and he was at or above 50 percent 29 times in 39 games.  And consider this; of the 17 forwards with whom Schmidt skated any 5-on-5 minutes last season, 15 of those forwards had better Corsi-for percentages with Schmidt than apart from him.  The exceptions were Andre Burakovsky (minus-4.1) and Michael Latta (minus-2.8).  He skated 125 of his 513 5-on-5 minutes with Burakovsky, 73 with Latta.  At a fundamental level, he played well in his limited opportunities last season, even if his performance numbers lagged.

Yeah, yeah…fancystats and all that.  In the end, as Peerless likes to say, it’s about scoring goals and preventing goals, and there wasn’t enough of either for Schmidt last season.  But that’s okay, he’s a young guy; he’s got only 68 games under his belt (do hockey players wear belts?).  He might have had more games with the Caps but for a fractured shoulder blade he suffered in January, right after he was returned to Hershey.  After he returned to the ice he managed only one goal in 17 regular season games with the Bears (1-5-6 overall), but he did have quite a playoff – 4-5-9, plus-3 in eight games.

Nate Schmidt was ranked 163rd among North American skaters by NHL Central Scouting in advance of the 2009 entry draft.   That he would likely start for the Washington Capitals on Opening Night barely six years later is no mean achievement.

On the other hand, the clock is ticking on his development (he turned 24 in July), and one would like to see him take a significant step this season.  It would seem likely he will get his chance.  He is penciled into the third defensive pair, with Dmitry Orlov, a pair that has many more questions attached to it than answers.

Schmidt is at that point in a young player’s development where he has some experience (68 games with the Caps, 78 with the Bears), that he could show significant improvement – not so much an incremental step as one that gives a better hint of what his upside is.  So far, his progress has been quiet and persistent, and under the radar.  This year, with a steady diet of ice time being offered to him, his progress could be a bit splashier.