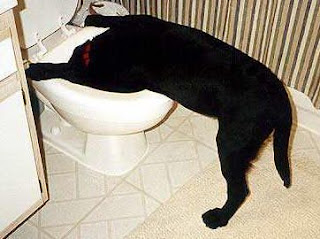 The Washington Capitals went into the time machine to produce a remake of their worst beating of the season as they lost to the New York Rangers last night, 6-0.


“You sure you want to write this up, cousin?”
It was reminiscent of their 7-0 loss to the Rangers on December 12th, except this time the home team fans didn’t have to watch on TV or catch the highlights on HBO’s 24/7 series. They could see it live and in living…well, “living” might not be the word…color.


“You’ll be sorry.”
That makes nine shutouts of the Caps this season, tying this team for the third highest number of times shutout in team history. Only the 1998-1999 team (which lost 45 games) and the inaugural club of 1974-1975 (arguably the worst team in NHL history) were shutout more times than your Washington Capitals of 2010-2011.


“This isn’t going to end well, is it, cuz?”
“He’s not happy, Cheerless.”
The game started at 7:08 pm…it ended at 5:49 of the first period when Derek Stepan elbowed Mike Green into the boards, giving Steve Eminger the chance to score the first goal seven seconds later with Green still prone on the ice.

By the time the third period ended, the Caps could say they recorded one goal on their last 89 shots in their last three games against the Rangers.

And that, kids, is about all we’re going to say about this game.
Posted by The Peerless at 7:21 AM 3 comments: