“For once you have tasted flight you will walk the earth with your eyes turned skywards, for there you have been and there you will long to return.”
-- Leonardo da Vinci

Assuming Dmitry Orlov is on the Opening Night roster for the Washington Capitals, it will have been 545 days between NHL games for the young defenseman.  Since he appeared in 60 games in his rookie season in 2011-2012, one in which he went 3-16-19 and finished fourth among rookie defensemen in scoring, Orlov has missed 153 of the Caps’ last 212 games over three seasons, including the entire 2014-2015 season to a broken wrist.  It is hard to remember that Orlov, as a rookie, was third among Caps’ defensemen in scoring despite being only sixth in average ice time and appearing in only those 60 games.

After missing all that time trying to comeback from a broken wrist, and before that the after effects of a concussion suffered in November 2012, Orlov has to demonstrate he is durable enough to shoulder the load of an 82-game season.  He will come into the 2015-2016 season penciled in on the third pair for the Caps, where he might be expected to skate 15 minutes or so a night.

If you are an optimist, there still is not much to go on with respect to Orlov and his potential to nail down that third-pair responsibility.  There is this, though.  He had 65 games of experience at Hershey where he was 9-26-35, with another ten games of playoff experience with the Bears, going 1-3-4.  It suggests at least the possibility that he could be a contributor in the offensive end of the ice.  And, he can throw the occasional open-ice hip check, if folks have forgotten…

There is the 545 days between games played, there is the fact that two of the five defensemen Orlov played with in his last game for the Caps are no longer in the organization (for the record: Julien Bruoillette and Tyson Strachan) and a third (Connor Carrick) seems unlikely to start the season in Washington.  In fact, only eight skaters with whom Orlov played the last time he dressed for an NHL game are likely to be taking the ice with him on Opening Night.  One might expect that there will be rust.  Not “rust dripping off the bow of the Titanic wreck” thick, but some nonetheless.

The Big Question… Is it reasonable to think Dmitry Orlov can put together a complete season in his first after missing so much time?

The problem for Orlov is that his injury bug hit right in the middle of his early development phase.  He is still just 24 years old, but he is going to be asked to assume a full share of ice time having missed the better part of three seasons in his development.  That could mean that he looks more like a 22-year old rookie for long stretches this season than one might normally expect, especially early in the season.  On the other hand, he does have those 119 games of regular season experience, and that could lead one to think (hope?) that the rust falls off quickly and that he resumes his climb upward on his development arc.

Playing teams that have legitimate shots at a championship usually means that one has to find those soft spots to exploit to be successful in defeating them.  Dmitry Orlov could be a soft spot for the Caps, at least in the early going.  He has missed a ton of games over the last three seasons, and he is still a developing player, one with his development stunted by those injuries and time missed.  In a sense, he is, if not starting over, than starting a couple of squares back on the game board.

It is probably not reasonable to think that he is going to come out of the gate prepared to be a consistent performer.  He and Nate Schmidt on that third defensive pair could be a pairing that opponents seek to exploit on a nightly basis.  In an odd way, it makes Orlov a suitable measuring stick for how the Caps are doing as the season progresses.  They are a team than cannot have good work done elsewhere negated by mistakes made by a young defensive pair.  In that respect, the objectives for Orlov’s season as it progresses are durability and improvement.  He exhibited the latter over the early part of his career, but has struggled with the former.  What makes it especially important for Orlov to be more durable is that, for the moment, the Capitals do not have very attractive options at the sixth defenseman position if he is unavailable.

That it has been a long time coming for Orlov to be healthy and in the Caps’ lineup is something of an incentive for Orlov to perform, and there is a danger there of trying to do too much before he has his game legs under him and sturdy once more.  Still, it would be hard to think that Orlov would lack for effort as he assumes a regular spot in the lineup; it is a place he has missed and Caps fans have longed for him to return.  That could help him to a productive season in the end. 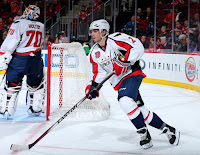 “The two most engaging powers of an author are to make new things familiar, familiar things new.”
-- William Makepeace Thackeray

If you compared Matt Niskanen’s first season with the Washington Capitals with the season he had going into free agency – a season that resulted in a seven year/$40.25 million contract with the Caps – you might conclude that he slipped a bit.  His goals scored dropped from ten to four, assists from 36 to 27, points from 46 to 31, power play points from 15 to 10, shooting percentage from 6.2 to 3.4.  And, whereas he earned votes for the NHL all-star team and the Norris Trophy in 2013-2014 with the Pittsburgh Penguins, he earned votes for neither in 2014-2015 with the Caps.

Ah, but if you look at that table above, you will see that Niskanen’s first season with the Caps was squarely in line with his career numbers, the shortfall in goals perhaps a product of a shooting percentage that ranks in the lower half of his career results, by season, and was his worst (please note) since his first full season in Pittsburgh (both being 3.4 percent).

As it was, Niskanen still finished third among Caps defensemen in points (31), second in power play goals (2), second in total ice time (22:21), first in even strength ice time per game (19:00), second in hits (143), second in takeaways (34), and he did it playing in every game for the first time in his eight-year career.  It was the profile of a solid all-around season, at least at a high level.

Underneath, it was a bit of an odd season.  Looking at his ten-game segments, there was a strange relationship among his numbers.  Early on, over his first 30 games, when he could score (2-10-12) he had a sluggish plus-minus (minus-6).  Then his scoring tapered a bit over his next 30 games (1-7-8), but his plus-minus soared (plus-13).  In his seventh segment he went dormant in production (0-1-1, plus-2), but then was hot as a firecracker in his last segment (actually, 12 games), going 1-9-10, but there was that pesky plus-minus (minus-2).  What made it stranger was the fact that he was a Corsi plus-32 while going minus-6 in those first 30 games, only a Corsi plus-15 in his next 30 games while going plus-13.  It made for a quirky season on a second-level.

Matt Niskanen has never been under 50 percent, Corsi-for, at even strength in his eight-year career.  His first season in Washington was no exception, with a 52.0 percent for the year.  On a segment-to-segment basis he was fairly consistent, at 50 percent of better between four and seven times over his eight ten-game segments.  His consistency carried over to his home and road performance.  In the friendly confines of Verizon Center, Niskanen was 3-13-16.  On the road, he was 1-14-15.  It makes sense.  Niskanen skated 1,122 shifts at home, 1,131 shifts on the road.  Consistent would be the adjective to describe his game.

Matt Niskanen might want to burn most of the game tapes from the postseason.  Minus-4 in his first contest (Game 1 against the Islanders, a 4-1 loss), was an even or worse player in 10 of 14 games, had one point in his last nine playoff games, no goals in 14 games overall.  Overall it was his worst possession performance in six playoff seasons for Niskanen, the only time (49.0 percent Corsi-for at 5-on-5) he finished below 50 percent.  And, he was even worse in close score situations (46.9 percent), also his worst career playoff result (numbers from war-on-ice.com).  Here is an odd Niskanen postseason stat…he does not have a goal in his last 21 road games, dating back to April 18, 2012, when he had one of the ten goals the Penguins scored in Pittsburgh’s 10-3 win in Philadelphia over the Flyers.

But then there were the teammates.  Last season, Niskanen the largest portion of his 5-on-5 time (1,334 minutes) with forwards skating with Sidney Crosby (434 minutes), Jussi Jokinen (388 minutes), and Chris Kunitz (374 minutes; numbers from stats.hockeyanalysis.com).  This past season, he spent the bulk of his 5-on-5 ice time (1,440 minutes) with Nicklas Backstrom (473 minutes), Alex Ovechkin (457 minutes), and Marcus Johansson (395 minutes).  It was not exactly a downgrade in teammates.

His was something of a less than expected level of output, especially at evens (2-18-20, compared to that 7-24-31 in 2013-2014).  And, it did not appear tied to either ice time (he averaged more with the Caps at even strength than he did the previous season with Pittsburgh), or teammates.  However, looking back at his early days in Pittsburgh, it might not be that much an unexpected result.  After he was traded from Dallas to the Penguins in February 2011, he finished with just a goal and three assists in 18 games to finish the regular season.  He also struggled in the postseason that year, going 0-1-1, minus-3 in seven games.

Matt Niskanen had a solid year coming off a big signing in the off-season.  Okay, that playoff record needs work, but he did not sink under the weight of a big contract.  His regular season play was consistent in its results, even if he occasionally got there by different paths, looking at his ten-game splits.  Now that he is more familiar with Washington, his teammates, and his coaches, he could experience an improvement in his performance this season, if his experience in Pittsburgh is a guide.  It would be a bit much to think he would return to the level of performance he experienced with the Penguins in his last season there, but it would not be a surprise to find some improvement in Niskanen’s performance.