The Peerless Prognosticator is ON THE AIR!!! -- Game 36: Capitals vs. Islanders, April 1

The Washington Capitals visit Long Island for the first time this season when they faceoff against the New York Islanders on Thursday night.  The Caps are coming off a 5-2 loss to the New York Rangers in which they held a 2-0 lead before the game was five minutes old.  The Islanders are returning home after a 2-2-0 road trip and carry a two-game losing streak into this game.

The Islanders have the best home record in the league by points percentage (.875/13-1-2), and unlike what one might expect from a Barry Trotz-coached team, they have the second best scoring offense on home ice this season to date (3.81 goals per game).

The Islanders built that scoring offense at home with balance – 16 different players have goals, and 21 have points at home this season – but they have also mixed in the unexpected.  For instance, the Isles’ leading goal scorer on home ice this year is not the uber-talented Mathew Barzal or the steady Brock Nelson or the injured Anders Lee.  It is Jean-Gabriel Pageau, tied with Jordan Eberle for the team lead with eight goals in 16 games at Nassau Coliseum.  There is a distinct home tilt to Pageau’s goal scoring, having those eight goals at home but only three in 19 road games this season.  He is in his first full season with the Islanders after being traded to New York in February 2020 by the Ottawa Senators for a first, second, and third round draft pick

Pageau was a capable contributor as mostly a bottom six forward in his first seven seasons, posting 63 goals and 142 points in 368 games.  However, he never hit the 20-goal mark over those seven seasons.  And then there was last year, his eighth season.  In 60 games with the Senators he posted 24 goals before he was shipped to the Islanders, for whom he added another two goals in seven games before the regular season was suspended.  Part of that jump in production might be attributed to getting more ice time and with it, more offensive responsibility.  After averaging 15:45 of ice time per game over his first seven seasons, he averaged 19:18 last season for Ottawa and 18:00 in his seven games with the Islanders to end the season.  This season, Pageau has 11 goals in 35 games while averaging 16:56 in ice time per game.  He is 0-1-1, minus-1, in three games against the Caps this season and 0-1-1, minus-13, in 21 career games against Washington.

Jordan Eberle has an odd connection to the Capitals.  He was drafted 22nd overall in the 2008 Entry Draft.  By itself, that does not mean much, but the Capitals held the 23rd overall pick in that draft.  They traded it, plus a second round pick (54th overall) to New Jersey for the 21st overall pick.  The Caps selected Anton Gustafsson with that pick, a player who would play one game as a professional in North America, that with the Hershey Bears.  Meanwhile, Eberle was drafted by Edmonton with the next pick, the one the Caps jumped over to take Gustafsson, and played 507 games in seven seasons with the Oilers before he was traded to the islanders for Ryan Strome in June 2017.  With New York he has 71 goals and 157 points in 253 games over four seasons.

Over his first 20 games this season, Semyon Varlamov put in his claim to be a Vezina Trophy finalist with a 13-4-3, 2.03, .929 record with three shutouts.  Things have not gone quite as smoothly for Varlamov lately, though.  In his last five appearances he is 1-3-0 (one no-decision).  lately, though.  It has not been a matter of overwork, Varlamov having faced 26.4 shots per 60 minutes over those five games, and average that is less than what he faced on a per-60 minutes basis over his hot 20-game start (28.4).

As the Islanders head down the stretch, the question about Varlamov is whether he can get back to his fine play over his first 20 games.  It bears noting that since he finished second in the Vezina Trophy voting on a record of 41-14-6, 2.41, .927, with two shutouts, he has been a good deal more average.  His goals against average of 2.72 over the last seven seasons, including this one, ranks 34th among 65 goalies logging at least 5,000 minute in that span.  His .915 save percentage ranks 21st in that group, and his even strength percentage of .919 ranks 37th among 63 goalies appearing in at least 100 games over that period.  These are numbers of an above average goalie, not the Vezina candidate that Varlamov has been over the first two-thirds of the season.  Varlamov is 0-3-0, 3.76, .864 in three appearances against Washington this season and 4-9-1, 2.96, .914 in 14 career appearances against the Caps. 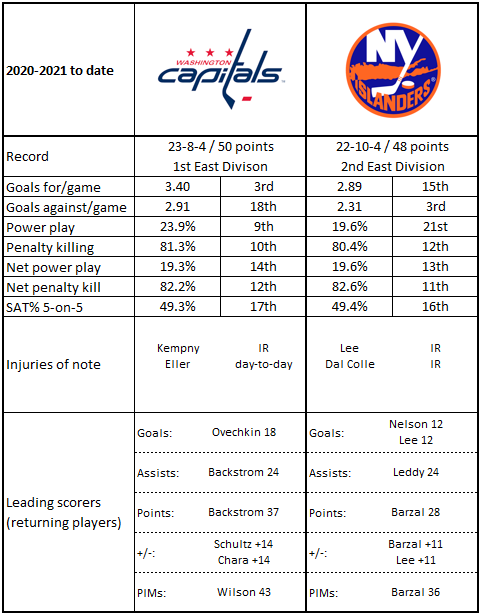 3.  New York has allowed only 32 goals on home ice, tied with Boston for second fewest in the league (Minnesota: 30).

4.  The Islanders are the only team in the league with a perfect record on home ice when out-shooting their opponent (9-0-0).

2.  But when they lost during that span of games, they lost.  All four regulation losses were by multi-goal margins, three by three or more goals.

5.  Of 22 skaters to dress for the Caps on the road this season, only two – Trevor van Riemsdyk and Jonas Siegenthaler – do not have a point.  Each has appeared in only two road games.

Leddy has quietly climbed the Islanders all-time lists in variety of categories among defensemen.  He is two games short of becoming the eighth defenseman in team history to appear in 500 games with the club.  With two goals he will tie Jean Potvin for fifth place on the all-time Islanders list among defensemen.  Only three defensemen in Islanders history have more points than Leddy (237) – Tomas Jonsson (333), Stefan Persson (369), and Denis Potvin (1,052).  He needs one power play goal to jump into the top ten among defensemen where he would tie Roman Hamrlik (14).  He is eighth in team history among defensemen in power play points (83).  This season he has only one goal on 47 shots, but with 24 assists he is on a pace to establish a career high in points per game (0.69).  Leddy is 0-0-0, minus-4, in three games against the Caps this season and 1-7-8, minus-13, in 32 career games against Washington.

Snipers are paid to snipe.  And when said sniper is scoring goals with career high efficiency, you would be forgiven for thinking he is having a big year.  So, why isn’t Jakub Vrana having a big year?  His 15.4 shooting percentage is the best of his five-year career to date.  However, his 0.29 goals per game (ten for the season in 34 games) is his third best in those five seasons. The problem is that he just has not gotten puck to the net.  Vrana has 65 shots in those 34 games, 1.96 shots per game, more than three-quarters of a shot per game short of what he averaged last season (2.71).

It was a progression of sorts that led to Vrana’s being largely absent from the score sheet in recent games.  He was 3-5-8, plus-6, I the first ten games of the season, recording 20 shots in ten games (2.00 per game) and converting them at a 15.0 percent rate. He remained productive in his next ten games, going 4-2-6, plus-1, but recording 27 shots on goal (2.70 per game), converting 14.8 percent of those shots into goals.  He scored three goals on nine shots in his next four games, but things have taken a turn in his last ten games.  He is without a goal in that span on just nine shots taken, and what might be of most concern, he averaged just 13:20 in ice time over those ten games, not what one would expect from a top-six forward.  In fact, his average even strength ice time per game for the season overall has slipped between Nic Dowd (12:25) and Conor Sheary (12:02).  Vrana is 0-1-1, minus-1, in three games against the Islanders this season and 4-5-9, even, in 18 career games against New York.

More than the Pittsburgh Penguins, more than the New York Rangers, more than the Philadelphia Flyers, the Islanders are joined at the hip with the Caps in their respective histories.  Since the Islanders came into the league two seasons before Washington, they have 1,678 wins to the Caps’ 1,687.  The Caps averaged 3.15 goals per game to the Isles’ 3.16.  New York averaged 3.13 goals allowed to the Caps’ 3.16.  Both have averaged 29.3 shots per game.  There is, of course, the matter of the Islanders’ four straight Stanley Cups in the early 1980’s against the Caps’ lone Cup in 2018, but in the regular season there has been little daylight between the teams in their overall performance. But the Caps do have a decided edge against the Isles over their regular season histories.  The Caps have 114 wins against the Isles versus 98 wins for New York against the Caps.  And that includes the three wins the Caps posted so far this year against the Islanders.  Do we hear “four?”

Posted by The Peerless at 3:14 PM No comments: