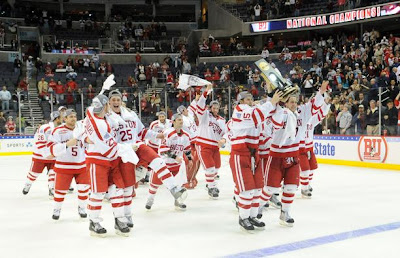 We did not see the Caps drop a 7-4 decision to the Florida Panthers last night. Except for sorting out the final statistics, there is one thing to take away from that game. Looking back at the last twenty Stanley Cup winners, those teams’ combined record in the regular season finale…

That is the very definition of meaningless.

What we did do last night was see, in 71 minutes and 47 seconds, everything there is to offer in college hockey. We could say that Boston University and Miami University put on a game for the ages, but was it really any more exciting than the 2007 final when Michigan State scored with 18.9 seconds left to steal a championship from Boston College, or when the championship game went to overtime in five of seven years from 1996 through 2002, or when Bowling Green went to four overtimes to defeat Minnesota in 1984?

Well, maybe. It was almost a case of a cliché unfolding before one’s eyes as the heavily favored Boston University Terriers broke on top with a late first period goal from Chris Connelly, but watched the lead disappear when Gary Steffes pounced on a loose puck early in the second. Then, the RedHawks – the David that hadn’t won a championship in, well, anything – slung two rocks at the Goliath of Boston University. Tommy Wingels and Trent Vogelhuber scored 3:21 apart late in the third to put themselves on the carpet to accept the national championship trophy.

But they never got their hands on it. BU pulled the goalie with three and a half minutes remaining, pulling out all the stops to get the two goals needed to keep the game going. They got the first when Zach Cohen picked up a loose puck and backhanded it from a difficult angle under the right arm of RedHawk goalie Cody Reichard. Then, Matt Gilroy showed why he is this year’s Hobey Baker Award winner. Chris Higgins circled with the puck at the near wall and sent a pass to the high slot to Gilroy. In one motion, Gilroy collected the pass, pulled the puck around a Miami defender, and slid it to Nick Bonino at the right wing faceoff dot. With Reichard unable to close the gap left on his glove hand, Bonino rifled the puck into the back of the net with 17.4 seconds remaining to send the game into overtime.

To the credit of both teams, neither played it safe in the overtime that followed, and what that suggested was that it would take an odd bounce or an unexpected deflection to settle the matter. What happened was a goaltender’s worst nightmare. As the clock was ticking toward 12 minutes in the first overtime, Kevin Shattenkirk dropped the puck for Colby Cohen at the left point. A seam opened between two Miami defenders, and Cohen took a step in. As he wound up to take a slap shot, events unfolded that bore an uncanny resemblance to events any Caps fan of long standing will remember.

Roll back to an April night in 1996 and a playoff game between the Capitals and the Penguins that inched its way late into a fourth overtime… The Penguins were on a power play, and Sergei Zubov sent a pass across to Petr Nedved at the left wing point. Nedved walked in to the top of the circle with Caps defenseman Mark Tinordi blocking his path. Nedved was patient enough to let Tinordi make his move, which was to go down to the ice to block a shot that didn’t come. Nedved stepped around Tinordi and sent as harmless looking a shot as there was in this game toward Kolzig. He never saw it. The seeing-eye puck avoided several players screening Kolzig and fluttered over Kolzig’s left shoulder into the back of the net to win the game.

And so the nightmare unfolded for Miami’s freshman goaltender. Cohen stepped in and took the shot. Redhawk defenseman Kevin Roeder dropped to block the shot, something he has probably done countless times as a player. But what probably never happened in all those instances was the puck hitting his leg and tumbling into the air. For a goaltender, the worst nightmare imaginable is to be tracking the puck, following it off the stick of a shooter, and then – it’s gone. Where is it?!

It is as helpless a feeling as there is – a goaltender becoming frozen in place, hoping the puck he can’t see hits him somewhere, anywhere. Reichard was frozen in his defensive position waiting to feel rubber hit padding somewhere. But what he didn’t know, 18,000 people were watching in slow motion…the puck tumbling slowly, lazily through the air toward the Redhawk net. The only clue Reichard would have of where the puck was would be the next sound he’d hear – a whoosh of “ooohs” from the crowd for a puck that barely slid by the open net, or a roar of celebration.

As the puck tumbled unseen over his left shoulder and settled softly behind him in the net, he heard that roar. And it was coming from the other end of the ice, where the Boston University faithful were celebrating the fifth hockey championship in the school’s history.

Truth be told, Boston was bigger, stronger, faster than the RedHawks. There were times in the game – late in the third period being one –when the Terriers looked like a passable NHL prospect team that could give lower rung NHL teams a run for their money. But my, how those RedHawks worked. Not one of them took a shift off. They skated with, badgered, harassed, and simply willed themselves to compete with BU. If ever it could be said of a team that “they left it all on the ice,” it could be said of the Red Hawks. For long stretches, you could almost see the thought bubbles over the heads of the BU players…”don’t these guys know we’re better?” Miami didn’t care.

But fate isn’t sentimental. Miami was the underdog’s choice and, it seemed, the crowd favorite. Unfortunately for Miami and their fans, they had 59 minutes and 42 seconds of fight in them. While they fought gamely after the tying goal with 17.4 seconds left, one had the feeling that it would take a stroke of luck for this underdog to win. And tonight, that stroke of luck wore the wrong shade of red.

Caps fans shouldn’t be surprised though…that winning goal, coming as it did in such an unexpected fashion, came at the same end of the ice where Joffrey Lupul ended the Caps season last year, when Cristobal Huet lived his own nightmare of not being able to find a puck that was out there somewhere.

photo: Toni L. Sandys-The Washington Post
Posted by The Peerless at 9:46 AM No comments: