Let it be known that Matt Bradley was the first Capital to take the ice on Day One of Training Camp 2008... 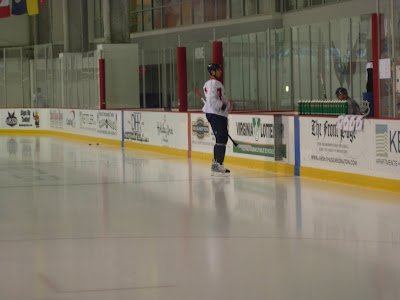 It was two sheets and all hockey, all the time today, as the Caps cracked open the 2008-2009 season with three groups taking the ice at Kettler Capitals Iceplex.

Today, for lack of a better term, was Skating Day, as the coaching staff put the groups through a high-tempo workout that emphasized skating…a lot of end-to-end work that got the legs used to what’s coming over the next couple of weeks. 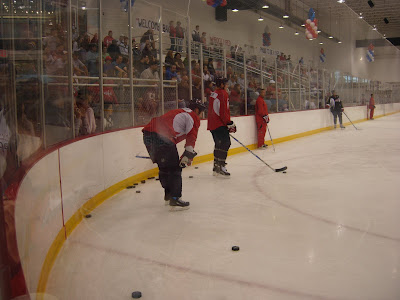 Chris Clark and Michael Nylander taking the ice in Group III in the afternoon (matched with Tomas Fleischmann as the “red” forward line). Both looked rather smooth in drills.

There were a couple of dicey moments, both of which occurred in the Group III session, as Tom Maxwell took a puck to the leg that left him in a heap, crawling on all fours to the bench, where he was worked on. We didn’t see him return. There was also the matter of Quintin Laing dinging a shot off the side of Brent Johnson’s noggin, hitting him flush in the side of the mask. Johnson didn’t look the worse for wear, though, as he and Laing stood together at the next rinkside huddle smiling about it.

No one looked to be laboring, even with the tempo of the drills – hopefully a reflection of an attitude of taking this year seriously from the get-go. No one was taking shortcuts…ok, there was that cutting short the lap Mike Green pulled off when he was late getting back to the huddle at rink-side.

From development camp, rookie camp, and now the first day of training camp, there is certainly an impression that Coach Boudreau and the Caps’ brain trust have it in their minds that they’re going to try to skate teams into dust. Guys who can’t skate are going to have a lot of trouble keeping up with the top-shelf players on this team.

Given that it is a gorgeous day here in the DC area, it was a well-attended session on both rinks. The stands on the Capitals rink looked about 90 percent full and the floor filled behind the glass for the morning Group I session (the one featuring Alex Ovechkin and Nicklas Backstrom, who was dressed in the orange sweater today). The Group II session on the Arlington rink (the one featuring Alexander Semin, Sergei Fedorov, Jose Theodore, and Donald Brashear) was ringed a couple deep with the upstairs filled. The Group III session on the Capitals rink at 12:30 (with Clark, Nylander, and Mike Green) looked to be about as filled as the morning session.

As journeyman catcher Jake Taylor put it in the movie, “Major League,” they don’t cut anybody the first day. It was just a day to soak in four hours of hockey (even if it was drills). Here are some images of the first day… 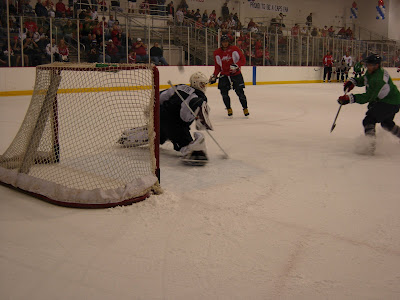 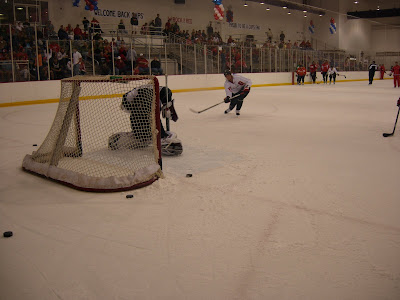 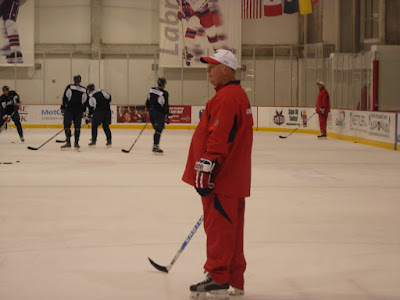 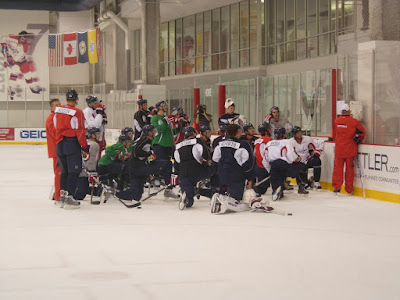 ...and getting some teaching in 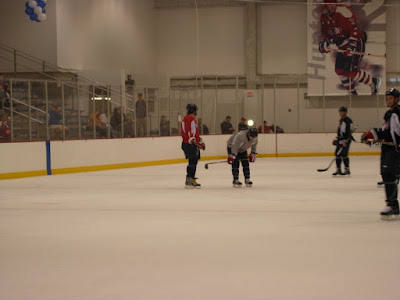 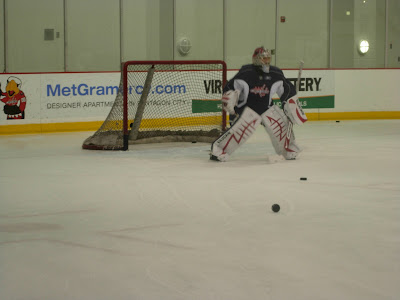 Jose Theodore getting some work in 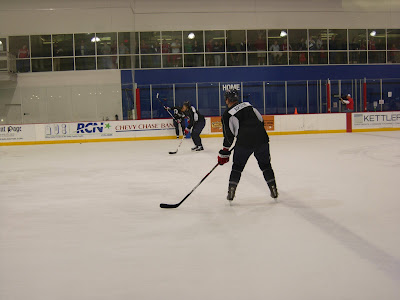 Defensemen in some offensive zone drills 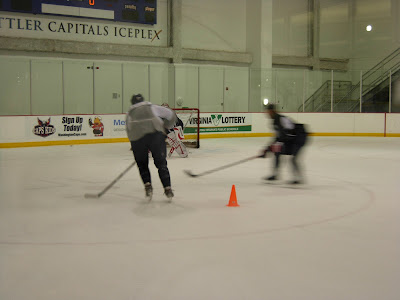 Donald Brashear taking aim on Theodore
Posted by The Peerless at 3:04 PM 6 comments:

Looking back to look ahead

The Peerless hails from a part of the world that includes in it what are called the “Endless Mountains.” It is a beautiful part of the world where, as the name suggests, there are hilltops as far as the eye can see. This past week, we were reminded of that in a way in looking at the players the Capitals brought to rookie camp. Because, this past week was not about this year or next; it was about five years, ten years from now. And in that, the Capitals’ potential seems – for what might be the first time in the history of the franchise – endless.

Although it is tempting to look at the team one follows closely and see only the positives – to engage in Pollyanna-like thoughts of what might be – the group brought to rookie camp this week included a host of players who could be contributing NHL'ers, and in more than a few cases could include some who will make quite an impression in the decade to come.

If one looks only at the defense, the hopefuls at camp included such as: Josh Godfrey, Karl Alzner, and Viktor Dovgan who could crack an NHL roster down the road (or sooner). One could add that to the 25-and-under crowd of defensemen that is already on the Caps roster or who could be on it in the near future. That group, for sake of argument, might look like this:

Five years from now, that group would still be 30 or younger to start the season. You'd have to think all of them are NHL-roster capable, and some of them major contributors. And Joe Finley hasn't shown up yet.

Again, five years from now this group would still be 30 or younger. The goalies being counted on – Simeon Varlamov and Michal Neuvirth – are each only 20 years old.

The kids skating this past week are going to push some other guys hard and some of those right off the club in a few years. Although there are no guarantees of success in the future, for the first time, perhaps, in the history of this franchise there is depth of talent as far as the eye can see into the future. What was on display this week was the embodiment of the club’s strategy – to build a perennial contender using the draft and home-grown prospects as its core element. So, as the big club takes the ice this morning to ring in the 2008-2009 season, with all the promise that suggests, remember that the years to come look rather bright for the Caps and their fans, too.