The fourth of the questions we are looking at is one that the Washington Capitals did not have to address often last season, or at least as often as some teams. 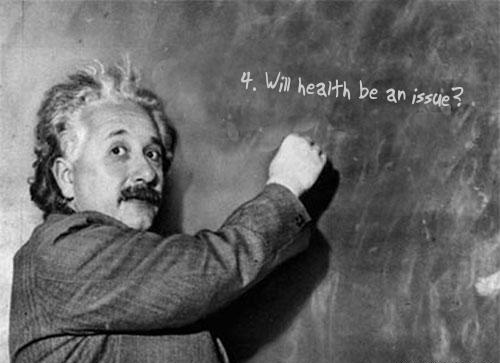 The 2014-2015 season was a relatively healthy one for the Washington Capitals.  The team dressed a total of 29 skaters over the course of the season, well below the average across the league of 32 skaters employed over the course of the season.  Only six teams used fewer skaters in 2014-2015.  The following chart illustrates the range of skaters employed across the league in 2014-2015 (ranked by number of skaters; note: total is greater than the number of skaters participating in league play due to players skating for two or more teams as a result of trades/other transactions):

What is more, the Capitals were able to ice a consistent lineup.  Only two teams had more players appearing in 70 or more games than the 13 who skated for Washington (the New York Islanders and Los Angeles Kings, with 14 apiece), and no team had more skaters appear in all 82 games than the Caps (seven).

Already, though, health is an issue for the team.  Every team gets nicked up along the way through a season, and some clubs go into the postseason with players that are playing through injuries that would otherwise put them on the bench.  What that means is that an off-season is often time for those issues to be addressed, for players to undergo treatment or surgery, and to rehabilitate themselves.  Sometimes, the issues carry over into the next season.

That is the case for the Capitals as they prepare for the season opener on Saturday.  When they take the ice, two important parts of the team could be on the bench with injuries that were dealt with over the summer.  Nicklas Backstrom is still rehabilitating his surgically repaired hip, which could keep him out of at least four games to open the season, and Brooks Orpik had wrist surgery last July that might or might not render him unavailable for the opening of the new season.  On top of that, Jay Beagle sustained what was called a “slight lower body injury (no doubt a new NHL injury category)” in the Caps’ last preseason game that Beagle might have played through had it been a regular season game,  but given this team’s history with “lower body injuries” of any sort, slight or otherwise (see: Mike Green, Brooks Laich, Tom Poti), those three words are always a bit ominous.

Health and success do seem to go hand in hand, to a point.  Looking at the last ten Stanley Cup champions, there seems to be no magic bullet as far as number of skaters employed is concerned.  The ten clubs averaged 30 skaters in their respective championship years, ranging from 25 (the Los Angeles Kings in 2013-2014) to 36 (the Pittsburgh Penguins in 2008-2009).

Having a significant number of skaters dress for all 82 games appears helpful.  Six of the ten champions had four or more skaters appear in all 82 games, the Anaheim Ducks of 2006-2007 having eight such skaters. 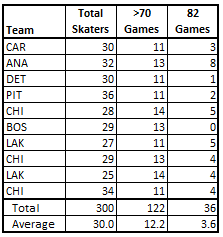 It is hard not to think of things like injuries snowballing.  It is as if bad luck takes over a team and chokes the life out of it.  The Columbus Blue Jackets and the Pittsburgh Penguins were two clubs that were hit by an avalanche last season, and we don’t mean the hockey team from Denver.  One club was able to deal with it and reach the postseason, but it was a somewhat damaged team that could not advance past the first round.  The other club – one that reached the postseason the previous year for just the second time in franchise history – did not have the depth to overcome the plague of injuries.

Capitals fans might remember the 1998-1999 season, the one immediately following their Stanley Cup final year, when the club lost 511 man games to injury.  We will be rubbing a rabbit’s foot, knocking on wood, and keeping a four-leaf clover in our wallet to guard against the Caps or their fans having to endure a season such as that.  Because, if the Caps are healthy, the rest will take care of itself.

Posted by The Peerless at 5:35 PM No comments: