Nicklas Backstrom
Theme: “The way to push things through to a finish effectively must be learned.”
-- William Frederick Book

(click pic for larger image)
Talk about fast out of the gate. By the time Nicklas Backstrom had played in 14 games in the 2011-2012 season he was 5-15-20, even, through Veterans Day and on a pace to finish 29-88-117. It was not as if he slowed down a lot after that sizzling start, either. For a time, roughly coinciding with the last days of the Bruce Boudreau tenure as head coach, he did ease off (2-3-5, minus-6, in his next eight games up to Boudreau’s firing). But he picked up where he left off on Veterans Day, scoring a goal in Dale Hunter’s debut as Capitals’ head coach and using that start to go 6-11-17, plus-4, in his next 16 games. Having already recorded three assists in a game against the Calgary Flames on January 3rd, Backstrom was still on a pace for a 28-63-91 year.

But as the clock was passing the ten-minute mark of the third period of that January 3rd game against Calgary and the Caps holding a 3-1 lead, Backstrom took a pass from Roman Hamrlik at the Washington blue line. Backstrom took two strides and was sliding the puck to Mike Knuble on his right wing, who was going to dump the puck into the Calgary end to get a line change. Backstrom never got off, at least not before Rene Bourque came from Backstrom’s left (away from where Backstrom was looking to pass the puck) and drove his right elbow into the side of Backstrom’s head.

Backstrom would miss the next 40 games over 88 days with a concussion. The Caps were 21-15-2 with Backstrom in the lineup for the first 38 games, a 95-point pace, and were on a four-game winning streak when Backstrom went out of the lineup. Over the next 40 games the Caps went 18-16-6, an 86-point pace. Ten of those wins would be compressed into three winning streaks of three, three, and four games. Otherwise, the Caps were a foundering club without their top center in the lineup.

He would not return until March 31st, but even with the rust still evident was a presence the Caps lacked for half a season. They finished the regular season 4-1-0 with Backstrom back in the lineup, and he recorded a goal and an assist in the regular season finale, a 4-1 win over the New York Rangers in Madison Square Garden.

The season had a sense of unfinished business attached to it, since Backstrom was coming off a down year in 2010-2011, at least scoring-wise (18-47-65 in 77 games). This season had all the makings of a special one, perhaps a return to the level of his 2009-2010 season (33-68-101, caerer bests in all categories). Even as far as the team was concerned there was that sense of unfinished business with him in the lineup. Backstrom was driving the bus when the Caps were successful – 13-22-35 in 24 wins in which he participated.

In a way, one might wonder how Backstrom assembled the numbers he did (14-30-44 in 42 games). If one works through some of the underlying numbers, they start well enough. At 5-on-5 Backstrom’s offensive zone start numbers were good – 52.2 percent, second highest on the team among forwards playing in at least 20 games. His offensive zone finishes were almost identical (51.1 percent). Overall, his faceoffs were good enough – a 51.1 percent winning percentage, fourth on the club among those taking at least 200 draws.

His Corsi/on-ice value of 3.76 was also fourth among forwards. OK, offensive zone starts/finishes, draws, Corsi values at 5-on-5 point in the right direction. But the quality of competition he faced was 11th among the 15 Caps forwards playing in at least 20 games. That depressed his relative Corsi/quality of competition values; he was 14th among the 15 forwards in this measure (only Keith Aucoin’s was lower). It gives the appearance of Backstrom feeding of the opponents’ weaker players to an extent. Certainly not a bad thing. Like to see more of it.

But here is the odd part and perhaps an indicator of why a player on an 86-point scoring pace finished a minus-4 for the year. His PDO value at 5-on-5 was awful. The 986 value with which he finished the season was better only than Matt Hendricks, Mike Knuble, and Troy Brouwer. It seems incredible that the shooting percentage for the Caps with Backstrom on ice was only 8.61 percent, and the .900 save percentage for Caps goalies with him out there was better only than that recorded when Brouwer was on ice (.898). Here is how Backstrom’s number compare with those of last year: 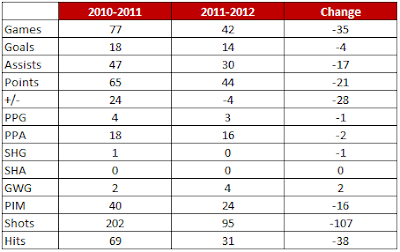 Odd Backstrom Fact… Backstrom was plus-5 against the other seven Eastern Conference teams qualifying for the playoffs. He was minus-8 against the seven teams failing to qualify for the post-season.

Game to Remember… November 1, 2011. Nicklas Backstrom had a relatively quiet game against the Anaheim Ducks for the first 59 minutes. He had no points, no shots on goal, was getting his lunch eaten in front of him on draws (he had lost 11 of 17 faceoffs to that point), and was a minus-1. Not much to remember so far. And once already in the 60th minute of regulation he had been robbed by goalie Jonas Hiller from between the hashmarks – his first shot on goal of the game. The puck went skittering off into the corner to Hiller’s left, the opposite side of the ice from where Backstrom had circled. As the Caps and Ducks were jostling for puck possession in the corner, Backstrom did another complete circle, finding himself at the top of the left wing circle as the puck found its way to Jason Chimera at the top of the right wing circle. Chimera fired the puck to the net, and Hiller kicked it to his right – just where Backstrom happened to be. Backstrom was in the right spot to send the puck in the direction from which it came, with Hiiller sprawled in crease and an open net behind him. Backstrom didn’t miss, and with 42 seconds left the game was tied. He wasn’t done. You will remember how we described this in the wrap-up for Jeff Schultz…

“Schultz got the play started when he pinched down the left wing wall to keep a loose puck in play as two Ducks were closing on him. He wristed the puck toward the net, where it hit a Duck stick, then Alex Ovechkin’s stick before settling in front of Backstrom at the doorstep where he flipped it in for the winner.”

In the space of 3:00 of game time, Backstrom turned an otherwise forgettable performance into his game to remember for the season.

Game to Forget… November 26, 2011. After a 7-0-0 start, the Caps were 5-8-1 in their next 14 games heading into Buffalo to take on the Sabres. Not that Backstrom was playing that poorly – he was 2-3-5, plus-2, in his previous three games. But the scoring streak would not get to four games, and he was hardly “plus.” He was on ice for four of the five Sabre goals scored that night in a brutal 5-1 loss against missing nine regular players to injury. Backstrom finished minus-4 (as did Alex Ovechkin), his worst such night in the NHL. It was Bruce Boudreau’s last game as head coach for the Caps.

Post Season… There was a sense of unfinished business here, too, after Backstrom’s injury-influenced 2010-2011 post season in which he had only two assists in nine games. Backstrom finished second on the club in playoff scoring, but it wasn’t what one might consider a top-notch performance. There was, of course, the antics at the end of Game 3 against Boston when he was assessed a match penalty for cross-checking Rich Peverley in the head after the horn in a 4-3 loss to the Bruins. In the other 13 games for the Caps he didn’t show the ability to string together games in which he contributed on the score sheet; he had points in consecutive games only in Game 1 and 2 in the opening round series. He had only two goals in the 13 games, one in each series (the goal in the Boston series being the overtime game-winner in Game 2 in Boston).

In the end… No single play had a greater effect on the Capitals’ regular season than that in which Rene Bourque elbowed Nicklas Backstrom to the sideline, but perhaps not for the reasons one might think. Backstrom’s absence, by itself, should not have left the Caps – allegedly one of the best teams in the league – wandering through winter looking for a spark of a winning streak. It pointed out starkly how thin the team was at an important position. But on another level, his absence underlined the fact that Backstrom is a damned fine player, perhaps the most important ingredient in whatever success the Caps might have moving forward.  It is important that he be there, whole, for the finish.