Washington Capitals: That Was The Week That Was - Week 3

The Washington Capitals could not win a game in regulation in Week 3 and sustained a pair of losses that left them in sixth place in the Metropolitan Division and tenth in the Eastern Conference standings to end the week.  By any measure, it was an unsuccessful week and one where problems they had in Weeks 1 and 2 seemed to remain problems in Week 3. 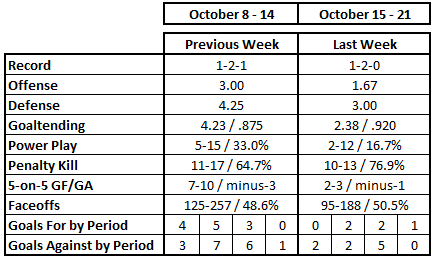 Recording consecutive weeks with losing records has been a rare occurrence for the Caps in recent years.  In fact, the last time it happened was in Weeks 24 and 25 in the 2013-2014 season.  What made Week 3 difficult and concerning was that the Caps lost both contests they played at home.  They have just two standings points earned in four home games so far and have not won on home ice since the home opener against the Montreal Canadiens.  What has been the surprise is that despite a difficult road schedule so far, the Caps are 3-1-1 this season, including their 4-3 overtime win against the Detroit Red Wings on Friday.

One of the problems the Caps had coming into Week 3 was a lack of balance in scoring, getting contributions from the top-six forwards but little from the rest of the lineup.  And there it was again in Week 3.  The Caps were shut out by the Toronto Maple Leafs and managed only a goal against the Florida Panthers in losses. Against the Red Wings in their lone win for the week, the Caps got goals from top-six performers (T.J. Oshie and the game-winner in overtime from Alex Ovechkin) and got goals from players whose contributions have been meager to date (Jay Beagle and Andre Burakovsky).

The twist in Week 3 was not so much that the Caps got little production from the bottom-six forwards and the defense, but that the Caps couldn’t seem to put it together consistently.  The Caps did get points from 13 skaters over three games, but only Andre Burakovsky had two points for the week, both (goal and an assist) against Detroit.  Christian Djoos scored his second goal of the season for the defense – the only two goals from the defense through nine games – but for the second time his goal came in a loss.

Despite allowing nine goals in three games in Week 3, the Caps did tighten up on defense in one respect.  They held opponents to an average of 30.0 shots per game for the week, allowing only the Red Wings more than 30 shots (37 in the Caps’ 4-3 overtime win).  And, they held the Florida Panthers to just nine even strength shots on goal on their way to outshooting opponents at even strength by a 90-59 margin for the week.

One of the problems with being a minutes-eating defenseman is that you might be on ice for a good share of the bad things that happen.  Such was the case for John Carlson in Week 3, who averaged more than 29 minutes per game for the week but was on ice for seven of the nine goals scored against the Caps.  Not that he was alone.  The Caps did have balance on defense with 16 skaters on ice for goals against.

The best goaltending tandem of last season has been something less than that this season, and an uneven week did not do much to improve on that.  There was the good, the not so good, and the bad that didn’t seem as bad as it was or was worse than it looked.  Braden Holtby got the call for the first two games of the week.  In the first, he held the Toronto Maple Leafs to one goal on 29 shots, a superb effort against the top scoring offense in the league.  Nevertheless, he took the loss.  Hioltby was a bit less efficient in the middle game of the week, allowing three goals on 37 shots in the Caps’ 4-3 overtime win over Detroit, allowing two goals on 15 shots in the third period being the concern.

Philipp Grubauer wrapped up the week in what was a fairly strange performance.  He allowed a goal on the first shot he faced less than 90 seconds into the game then settled down against a light shot load until he gave up a power play goal late in the first period against Florida.  Another power play goal did him in for what was his third loss of the season (0-2-1) and a disappointing .848 goals against average for the season.  This was a part of the Caps’ profile that one would not have thought would be a problem.  But whether is it a case of poor goalie play or lack of defensive support in front of them, the goaltending numbers are not what one expected.

The Caps did themselves a favor by limiting the Toronto Maple Leaf power play chances in the first game of the week by giving the Leafs just two power plays to work with.  In that context, it worked, the Caps shutting out the Leafs on those two chances in the 2-0 loss to Toronto.  The last two games of the week were another matter, the Caps giving Detroit five power play chances (the Red Wings scoring once) and Florida six chances (two goals).

What the Caps were was inefficient in those last two games of the week.  In 16:36 of shorthanded ice time against Detroit and Florida, the Caps allowed three goals on 24 shots.  It was quite a heavy shot load faced by Holtby against Detroit and by Grubauer against Florida facing those power plays.  That the Caps did get a shorthanded goal from Jay Beagle against the Red Wings helped, but it could not erase that this was a bad week for penalty killing.

The Caps had what was a virtual 50 percent week in the circle (50.5 percent), but there were differences by game and zone.  Washington dominated the faceoff circle against Toronto (54.9 percent) and against Detroit (55.0 percent), but were controlled by Florida in the last game of the week (44.2 percent).  The Caps did well in the ends of the ice, winning better than 50 percent in the offensive (52.5 percent) and defensive (57.7 percent) zones, but they had a tough time in the neutral zone (41.1 percent).

Individually, the Caps were split among the most frequent occupants of the circle.  Nicklas Backstrom (53.3 percent) and Jay Beagle (69.4 percent) were on the good side of 50 percent for the week among Caps with ten or more draws. Lars Eller (40.0 percent) and Evgeny Kuznetsov (31.7 percent) struggled. Eller’s numbers were mitigated by being better in the ends (7-for-14) than in the neutral zone (1-for-6). The best Kuznetsov could muster was his 8-for-22 (36.4 percent) in the offensive zone.

By period, you could say that with the exception of the overtime game-winning goal against Detroit, the Caps started poorly and ended games, at least in regulation, worse.  They did not score a first period goal all week and allowed five third period goals (including two by Detroit that helped send that game to overtime).  The best thing that might be said about giving up five third period goals for the week was that two of them were empty netters.  "Best," in this context, is a relative thing.

In fact, the Caps did not score first in any of the three games of the week, putting themselves behind the eight ball early.  What is means is that looking at the Caps by period through three weeks, their position deteriorates across the periods – a plus-3 goal differential in the first period (down from plus-5 after Week 2), minus-2 in the second period, and minus-5 in the third period.  Not much good to see here, either. 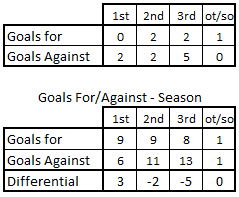 We would maintain that the circumstances surrounding this team with the roster changes, new line combinations, and young defensemen working into the lineup argue for looking at the first 20 games as something of a “shakedown cruise” to see what combinations work and to give the young defensemen a chance to acclimate themselves to the pace and rigor at the NHL level.  In that context, a .500 record in standings points through three weeks is not a terrible state in which they find themselves.

However, they have persistent issues with a lack of balance in scoring, are subject to breakdowns, allow far too many shots, are inconsistent on both sides of special teams, and they don’t put teams away.  And now, the Caps embark on what could be the most difficult part of their early schedule.  They will not resume action until Thursday of Week 4, but it begins their annual western Canada trip that will conclude with back-to-back games on Saturday and Sunday in Edmonton and Calgary.  Perhaps getting on the road will focus their attention on things that need work.  And there are a few things that need work.

Posted by The Peerless at 1:08 PM No comments: