Washington Capitals: One and Done -- Barrie Moore: Sometimes It's Over Before It Begins 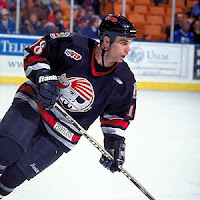 The 1993 NHL entry draft was an odd one.  It was the draft of one of the more disappointing first overall picks in NHL history, Alexandre Daigle claiming that distinction.  Perhaps stranger still is the fact that of the players taken in the last three rounds, the draft being 11 rounds in those days, five players appeared in 500 or more games in their respective NHL careers – Mike Grier, Pavol Demitra, Kimmo Timonen, German Titov, and Scott Nichol.

Left winger Barrie Moore was one of the more conventional late round picks, taken in the ninth round, 220th overall by the Buffalo Sabres, a long shot to make an NHL roster and a longer one to leave a lasting impression. He followed a conventional path in his development, spending the last two of his four seasons with the Sudbury Wolves in the Ontario Hockey League after he was drafted, and playing most of his first professional season in 1995-1996 with the Rochester Americans in the AHL, where he won a Calder Cup.

The 20-year old Moore did get a cup of coffee with the Sabres in that 1995-1996 season, dressing for three games at the tail end of the regular season.  It was an unremarkable debut, Moore blanked on the score sheet in each of the three games.  He got more exposure with the Sabres the following season, scoring his first NHL goal in his first appearance that season, a game-tying power play goal in what would be a 4-2 win over the St. Louis Blues to open the month of November.  It would not be a signal of prolific production to come, though, Moore going 2-6-8, plus-1, in 31 games.  It would be enough, however, to make Moore attractive enough to include in a trade package.  He was wrapped up with defenseman Craig Millar and sent to the Edmonton Oilers in mid-March for forward Miroslav Satan.

After appearing in four games with the Oilers at the end of the 1996-1997 season he found himself back in the minors for two seasons, skating with the Hamilton Bulldogs in the AHL for the 1997-1998 season.  He moved on to the Indianapolis Ice of the IHL to open the following season, but by the end of it, he was moving on to a new organization once more.  In February 1999, the Oilers traded Moore to the Caps for forward Brad Church (who almost merits a story of his own, he and fellow Caps first round pick Miika Elomo appearing in only two career NHL games; only one first rounder of the 1995 draft appearing in fewer – San Jose Sharks pick Teemu Riihijarvi never appearing in an NHL game).

It would take Moore a while to find his way to Washington, spending the remainder of the 1998-1999 season and almost the entire 1999-2000 season with the Portland Pirates.  But there was that one game in January of that 1999-2000 season.  Moore found his way into the lineup of a Caps team on a four-game winning streak and points in eight of nine games.  Nine of 18 skaters recorded points in a 6-3 win in Tampa over the Lightning to make it five wins in a row.  Alas, Moore was not among the point-getters, and he logged just 9:50 in ice time in the win.

That would be the only 9:50 he would skate for the Caps and the last ice time he logged in the NHL, done at the age of 24.  Moore was claimed by the Columbus Blue Jackets the following summer in the 2000 expansion draft and spent the remainder of his pro career between playing in the minors and in Great Britain before ending his career after the 2004-2005 season.

Photo: Hockey Hall of Fame
Posted by The Peerless at 12:00 PM No comments: