The Peerless Prognosticator is ON THE AIR!!! -- Caps vs. Avalanche, December 15th

It’s Mountain Time for the Caps tonight as the Capitals visit the Colorado Avalanche in Denver on the second stop of a four-city road trip.

“Just where is it I could find bear, beaver, and other critters worth cash money when skinned?” 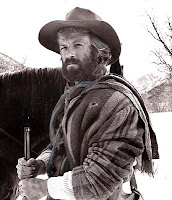 Oh, I get it… Jeremiah Johnson. Ride due west as the sun sets. Turn left at the Rocky Mountains.

“Aren’t these the Rocky Mountains?”

“So where are the bear, beaver, and the other critters?"

Well, the bear are in Boston, but they call them Bruins out there.

Hmmm… don’t know. But we did see something that looked like beaver.

“I’d be much obliged if you pointed it out…” 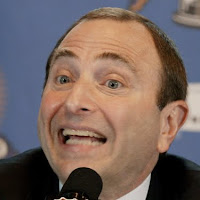 “Stranger… that’s enough to make me want to give up trappin’ and huntin’."


The Caps don’t get out in this part of the country much to do any trappin’, huntin’ or hockey playin’. So, what Caps fans might not be aware of, the Avs are having a very nice season so far, record-wise, although their numbers seem to be a little more ordinary... 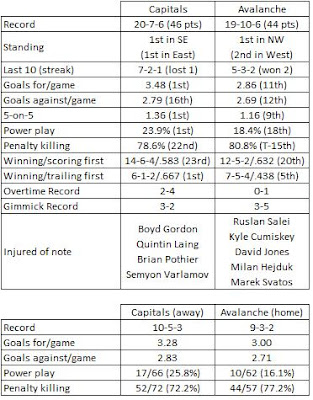 It's been a while since the Caps were in these parts. In fact, the last time the Capitals visited Denver, their lineup included Rico Fata, Ben Clymer, Kris Beech, and Jakub Klepis. Oddly enough, perhaps, the Caps won that October 25, 2006, contest by a 5-3 score. And the last time before that was Bruce Cassidy’s last game as head coach for the Caps, a 4-1 loss to the Avalanche on December 8, 2003. No player who dressed on that night is still with the club.

Three players on the current Colorado squad skated in that 2003 game, and they remain important cogs in the Avalanche machine.

Milan Hejduk is questionable for this game (knee injury), and his absence would be felt by the Avs in that he is Colorado’s second-leading goal scorer (12). Hejduk missed three games to the injury at the end of November, but returned to play in five games. The injury appears to have hampered him, though – he had only a goal in those five games, and he missed Sunday’s 3-2 win over Calgary. Of concern to the Caps if he plays, though, is that he a dangerous player at home. Hejduk is almost a point-a-game player at Pepsi Center (4-6-10 in 11 games so far this year). He is 3-5-8 in 11 career games against the Caps, but he comes into this game listed as day-to-day.

John-Michael Liles was a rookie in that December 2003 game against the Caps. Now in his sixth year with the Avs, if his statistical profile resembles anyone (not to mention his physical dimensions), it might be Brian Rafalski of the Red Wings – a defenseman who can pot 10-15 goals, get 40-50 points, and somehow succeed in spite of a somewhat smallish stature. Liles has had to deal with his own injury issues this year, missing a dozen games in two separate stints as a result of a shoulder injury. After having returned from his latest absence, Liles put up four points in three games, but he is in something of a drought coming into this game. In his last nine games he is 0-2-2 (he hasn’t had a goal since October 13th), although he is a plus-3. He has yet to tally a point in three career games against Washington.

Adam Foote is the old man of the mountain, quite literally. At 38 he is the eldest statesman on the Avalanche roster, having played almost 900 games (of 1,070 total) in a Colorado (or Quebec Nordiques) uniform. He is old enough to have played with John Tonelli (of the Stanley Cup winning Islanders teams) when Tonelli was wrapping up his career in the 1991-1992 season. Foote is not going to put up much in the way of points (although he has been over the 30-point mark twice in his career). What he will do is provide 20 solid minutes in his own end. Foote missed five games in late November with a jaw injury. Of some concern to the Caps, there is no team in the Eastern Conference against which he has more points in his career than Foote does against Washington (2-7-9 in 25 games). He had his only multi-point game of last season (1-1-2) in a 4-1 Colorado win.

Goaltending is something of an odd thing with the Avalanche. First, the two incumbents – Craig Anderson and Peter Budaj – might impress most followers as being better suited to back-up roles than as true number one goalies. But both have had very good starts to the year. The difference is in results. Anderson has received most of the work so far, appearing in 29 of Colorado’s 35 games thus far. He has a goals-against average of 2.57 and a save percentage of .920. These numbers are similar to those of Budaj, who has a GAA of 2.37 and a save percentage of .920. The difference is that Anderson is 16-7-5, while Budaj is only 3-3-1. Anderson, who is 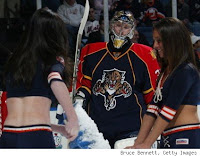 known for his sharp eye on the ice, would appear likely to get the start. He is 2-3-0, 2.62, .912 in five career games against the Capitals. He won both of his appearances against Washington last year.

Matt Duchene is the more celebrated rookie on the Avalanche roster, having been selected third overall in last June’s draft. But O’Reilly might have the better overall numbers. He is 4-13-17 for the season (Duchene is 9-10-19, but gets much more power play time – 3:10/game compared to 0:59 for O’Reilly) and is a plus-12 (Duchene is minus-7). He is second among Avalanche forwards in penalty killing time per game (2:53, compared to Duchene’s 0:27). He has been in a drought lately, though. He hasn’t registered a point in any of his last 11 games and hasn’t notched a goal in any of his last 18 games dating back to November 6th, when he had two against the Blackhawks.

Theodore is very familiar with the territory, having played two-plus seasons for the Avalanche. But he has never faced Colorado as an opponent. He is 25-16-2, 2.66, .905, and two shutouts on Pepsi Center ice. Theodore has not been consistent lately. In his last ten games he is 5-2-2, 3.49, .882, and was yanked less than seven minutes into a Veterans Day contest against the Islanders that the Caps won, 5-4, in a Gimmick (he did not get the decision). Here is the odd thing about Theodore’s season so far; his wins come in pairs. After winning on opening night against Boston, he won in consecutive appearances on October 24th and 27th, won in consecutive appearances on November 6th and 7th, and won against on consecutive appearances on November 30th and December 5th. After losing to the Sabres on December 9th, he won in his last appearance on December 11th against Carolina. If the pattern holds, Theodore gets the win.

1. In and out. Not the burger joint, this pertains to shifts. This game being played in Denver, altitude might be a factor here. It’s worth noting that no Colorado player averages as much as 50 seconds a shift (Kyle Quincey averages 49 seconds, 103rd in average shift time in the league). Eight Caps average at least 50 seconds a shift. If the Caps have those long shifts, will they have legs in the third period?

2. Draw, podner. Colorado is 29th in faceoffs in the league, the Caps are sixth. No Avalanche player who has taken at least 100 draws is winning the majority of the draws he takes (T.J. Galiardi has won 48.9 percent of 186 draws taken). The Caps have two players over 50 percent – David Steckel and Brendan Morrison – and Steckel is second in the league (62.2 percent). Whether the Caps can convert that advantage into set plays on the power play might bear watching.

3. More Mo’. Brendan Morrison has scored more career points against the Avalanche than any NHL team, except Calgary. He is 15-22-37 in 48 career games against Colorado. He’s stumbled a bit of late, going his last four games without a point. Concurrently, his ice time has been lower – in all of them he was under 20 minutes, and in three of them he was under 16 minutes (he’s averaging 17:10 so far this year).

The Caps have played only five games against teams of the Western Conference this year (of 33 total). Their 3-1-1 record so far is not unusual given their recent history. Coming into this year, the Caps were above .500 (in terms of standings points won) in three of four years since the lockout (they were 8-10-0 last year). Going west is not the problem it might have been earlier in Caps history. And that is why…