The Panthers won.  No one got hurt for the Caps.  Caps face Rangers in the first round.

That's pretty much it.

What...you were expecting analysis after that?!
Posted by The Peerless at 9:31 PM 3 comments:

With the outcome uncertain at this hour as to the Rangers' chances, there is still a chance that the New York area will be represented in the Stanley Cup playoffs.  And there is a chance they will not...for the first time in quite some time and the first time since the Devils joined the mix in the New York metropolitan area.
Posted by The Peerless at 1:32 PM No comments:

The Peerless Prognosticator is ON THE AIR!!! -- Caps at Panthers, April 9th


Uh, cuz? Where’s Peerless??
He’s taking a maintenance day to get ready for the playoffs?


What’s a “maintenance day,” Fearless?
That’s when your team has clinched all it’s going to clinch, and you get to sit home and eat Doritos while the scrubs write the blog.


And we’re the scrubs?
Well, for tonight, Cheerless.


Doesn’t seem fair.
Why is that?


I could go for some Doritos.
Well, we’ve got work to do first. Let’s see. Peerless usually starts off with some lame intro that is supposed to be funny or informative. OK, let’s see… Says here that there are more than three million people in Florida aged 65 and older.


What’s funny about that, cuz?
Picture them playing hockey…


Yeah, that is funny. They'd look like the Florida Panthers.
Well, not quite that funny. Actually, it has been a rather sad season for the folks playing professional hockey in south Florida this year. It all comes to a merciful end tonight.


Hey, do that table thing Peerless does…
Oh, yeah. Here’s how they compare to the Caps: 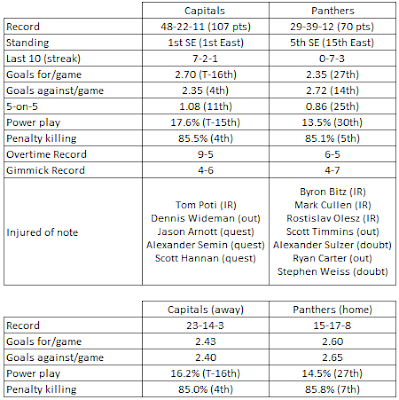 
So, you gonna do those player previews?
Nah, Peerless did them for the game last Wednesday, and it hasn’t changed much.


Yeah, well at least the Panthers have two 40-point scorers who will play in this game.
Yup. David Booth got a goal in that Caps game on Wednesday to hit 40 points, and Mike Santorelli had a goal, too. Then Santorelli had a goal and an assist against Tampa Bay last night…


But they’re a combined minus-48, cuz.
That’s one reason they’re so bad, Cheerless.


What about the Caps?
Well, with the Eastern Conference title now in hand, this is probably a game the Caps just as soon would rather be cancelled. But the league frowns on that sort of thing, and they’ve got to ice a team. The mystery is in wondering just who gets the night off. John Carlson might be getting that night off. Jason Arnott, too. Perhaps Scott Hannan.


But there will be 18 skaters and two goalies dressing for the Caps, won’t there, Fearless?
That there will, Cheerless. And there might even be a milestone or two to be had among them. For instance…

-- If Alex Ovechkin dresses and gets two power play goals, it will make it an even 100 power play goals for his career. If he gets one, he will break his tie with Mike Gartner for second all-time on the Caps power play goal-scoring list. Both currently have 98.

-- If Alexander Semin plays and records two goals and no assists, he will finish the regular season with the somewhat odd career to date line of 178 goals and 178 assists. It would also mean he finishes with his fourth 30-plus goal season in the last five.

-- If Mike Knuble gets a pair of goals, and Olli Jokinen gets none in his final game of the season, Knuble will pass Jokinen for 27th place in career goals among active players.

-- If Jason Chimera should pot two goals, it would make 100 for his career.

-- If Matt Hendricks should be whistled for at least five minutes in penalties, it will make 200 PIMs for his career. If he gets a goal, he will be the ninth Caps to hit the ten-goal mark this season.

-- If Boyd Gordon gets a point tonight, it will make for 19 Caps with at least ten points this season. If ether Jason Arnott or Marco Sturm get three, they would join that club, too.

-- If Ovechkin scores in overtime, he will take over the franchise record in overtime goals scored in a season. Mike Green currently holds the record with three overtime markers. If he gets the game-winner (in overtime or otherwise), he will finish with the second highest number of game winners scored in a season (Peter Bondra had 13 in 1997-1998). He is currently tied for second on that list with Mike Gartner (both with 11, Gartner having done it in 1984-1985), Ovechkin having now done it twice, the other time being in 2007-2008.

-- Seven different Caps have shorthanded goals this season. None of them, though, have more than one.

-- If Michal Neuvirth gets the call in goal tonight and shuts out the Panthers, it will make five shutouts for the season. That will tie him for second in franchise history for shutouts in a season (currently shared between Olaf Kolzig, who did it three times, and Don Beaupre), and it would break the tie he now has with Jim Carey for shutouts by a Capitals rookie.

-- If Semyon Varlamov sits out tonight’s game, he will end the year with the highest save percentage in Caps history (.924, besting Olaf Kolzig’s .920 in 1997-1998). If he plays and faces 30 shots, he can allow as many as four goals and still finish on top in save percentage for a season. Florida hasn’t scored four goals in a game since their last win… on St. Patrick’s Day.

-- In the “close, but no cigar” category, were Varlamov to get the call in goal tonight and win a 1-0 decision in a Gimmick, he would finish the season with a 2.14 GAA. Jim Carey holds the club record of 2.13…

…unless you count the goalie who isn’t here. Fourteen games (12 starts) isn’t a lot to go on, but Braden Holtby ended his season with a GAA of 1.79 and a save percentage of .934. Both would be team records for a season were he to qualify.


Hey, cuz…can we go now?
You in a hurry, Cheerless?


Yeah, I don’t want Peerless to scarf down all the Doritos before I get some.
Cheerless, you’re about as bright as a bowl of bean dip.


Hey, can we stop at the store and get some?
…yeesh.