Washington Capitals: That Was The Week That Was - Week 15

After a one-game Week 14, the Washington Capitals returned to a heavier workload in Week 15.  The four games on the schedule were the last they would play before their league-mandated bye week.  All in all, it was not a bad week from which to go into the break.  But there is much to wonder about this team as they head into that break. 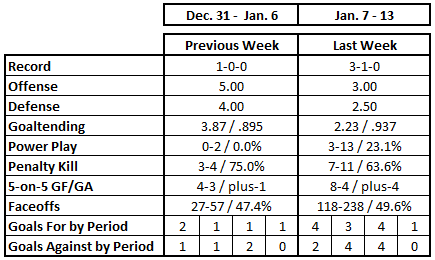 Week 15 made it 12 straight weeks without a sub-.500 week in terms of standings points earned.  Over that time, the Caps are 24-10-2, a 114-point pace over a full season.  It is not the pace the Tampa Bay Lightning are on (121 points), but it is quite impressive, given where many folks (us included) thought the Caps would be by this point of the season (generally fighting for a playoff spot).  It was the fourth time in the last eight weeks that the Caps had a three-win week.

The loss on the week’s record was noteworthy for its ending a pair of impressive streaks of their own.  The 3-1 loss to the Carolina Hurricanes ended a ten-game home winning streak and a five-game overall winning streak, both of which are highs for the Caps this season.

Still, the Caps ended the week having put more space between themselves and the rest of the Metropolitan Division.  At the start of the week, the Caps had a two-point lead on the New Jersey Devils, who were heading into a bye-week of their own.  By week’s end, the Caps had opened up a seven-point lead on the mostly idle Devils (they lost to the New York Islanders in a Gimmick in their only game of the week), and they had a six-point lead on the new second-place team in the division, the Columbus Blue Jackets.  When the Caps finished play for the week on Friday night, they had the biggest lead any team has had in the division this season. 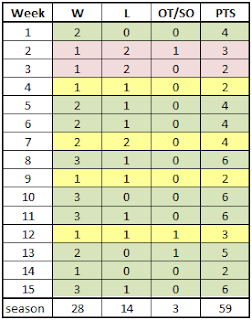 The goal grouping for the Caps was rather tight in Week 15.  Only seven players shared in the 12 goals scored over four games, and three players had eight of them – Brett Connolly, Alex Ovechkin, and Lars Eller.  If you are thinking Ovechkin led the group, you would be mistaken.  Eller had a goal in each of the four games of the week for a total of four (Ovechkin and Connolly had two apiece).  Eller had an uncommon week in another respect.  He had 11 shots on goal in four games, a significant number for a player who came into the week with just 75 shots on goal in 40 previous games.

The Caps had 13 skaters share in the points for the week, the group led by Ovechkin (2-4-6).  The four assists are particularly interesting in that they extended a run in which he has seven helpers in his last six games.  That brought him to within two assists of 500 for his career.  A player who did reach a milestone was John Carlson, who recorded his 300th NHL point when he set up Alex Ovechkin for a goal in the Caps’ 4-3 win over Carolina to end the week.

There was another noteworthy goal of the week.  Jay Beagle scored the game-winning goal in the Caps’ 4-3 win over the Carolina Hurricanes to end the week with just 1.3 seconds left in regulation time.  And as Caps fans know, when Jay Beagle scores a goal, the Caps win.  They are now 39-1-5 in the 45 career games in which Beagle scored a goal.  The Caps are a perfect 5-0-0 this year in games Beagle had a goal.

Too many shots.  The Caps dodged a bullet this week, allowing the four opponents a total of 144 shots, an average of 36.0 per game.  It extended the streak of games allowing 30 or more shots to five, and the Caps have now allowed 30 or more shots in seven of their last eight games, averaging 35.0 shots allowed per game.  Moreover, the Caps have been outshot in 11 of their last 13 games and allowed as many shots as they took in one other.  Over the four games this week, the Caps allowed shots on goal in bunches.  In the 12 regulation periods they allowed ten or more in eight, and the allowed a whopping 15 or more in four periods.

If there was an odd part of this it was in the Caps finishing the week with a shots-for percentage at 5-on-5 of 49.04, higher than one might think would be the case with the shots tipped toward the opponents as much as they were.

The Caps also had their challenges holding leads.  Five times in Week 15 they took a lead, and three times they lost it.  When one also accounts for the fact that the fifth lead was taken with only 1.3 seconds left in the last game of the week, it was not a good week for holding leads.  The defense was saved for the week by…

The goaltenders had a fine week.  Braden Holtby and Philipp Grubauer split the work, each getting two games, Holtby finishing with a little less than two minutes more of ice time.  Holtby had a solid week with a .924 save percentage off of 61 saves on 66 shots faced.  It would have been better had the Caps not been sloppy on a power play against Carolina in the third game of the week, allowing Jordan Staal to gobble up a turnover and score on a breakaway.  What was a bit concerning, though, was the manner in which his save percentages progressed, period to period.  He stopped all 17 first period shots he faced in his two games, but he was 29 for 32 (.906) in the second periods of games and 13-for-15 (.867) in the third periods of the two games.  He stopped both overtime shots he faced in the Caps’ 4-3 win over St. Louis to open the week.

Three goals on 13 chances is a decent week.  Only twice this season have the Caps recorded more power play goals in a week (four in Week 7, five in Week 2).  Not that there weren’t a couple of curious wrinkles.  Yes, Alex Ovechkin had one of the power play goals, but there were Brett Connolly and Lars Eller getting one apiece as well, Eller’s being his first man advantage goal of the season.

Ovechkin had two assists on the power play for the week, allowing him to figure in the scoring for each of the three goals.  He was one of six Caps to record power play points for the week, John Carlson adding a pair of assists, Nicklas Backstrom with an assist, and Jakub Vrana with a helper in addition to the goal scorers.

The Caps were effective on the man advantage with their three goals on 13 chances, but they were not particularly efficient in terms of putting goals on net on the power play.  In 22:24 of power play ice time for the week they managed 16 shots on goal.  Ovechkin led the team with five power play shots.  In the unusual, Brett Connolly had three to finish next in line, making the most of his 8:02 of total ice time for the week.

The disappoint part of the power play in an overall sense was allowing a shorthanded goal to Carolina in the third game of the week.  It was the sixth shorthanded goal allowed by the Caps this season, tied for fifth-most in the league. 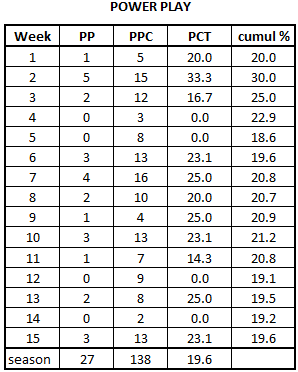 Here again, too many shots.  Braden Holtby and Philipp Grubauer stopped 17 of 21 shots, and while the .810 save percentage leaves a lot of room for improvement, those 21 shots on goal were allowed in just 14:58 of shorthanded ice time.  Carolina was especially effective getting shots to the net on their power play, scoring two power play goals on 14 shots on goal in just 7:22 of man advantage ice time in their two games against the Caps this week. 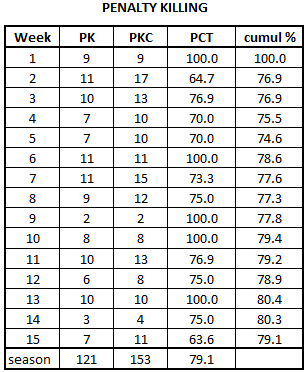 For a team that finished the week one draw under 50 percent, there was a fair amount going on in the circle.  Not least of it was Jay Beagle getting (for him) smoked on offensive zone draws, finishing with just five wins on 15 o-zone faceoffs.  It was part of a weak week overall on offensive zone draws, the team winning just 37 of 88 faceoffs (42.0 percent).

As bad as the Caps were in the offensive end, they were that good in the defensive end, winning 44 of 76 faceoffs (57.9 percent).  In fact, no Capitals taking more than one defensive draw for the week finished under 50 percent.  Lars Eller added another dimension to a fine week by winning 12 of 18 defensive zone faceoffs (66.7 percent). 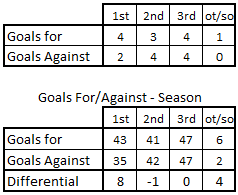 On the offensive side of the ledger, the Caps expressed a measure of balance in the way they scored goals across the periods.  The odd part about the Caps scoring four first period goals is that the Caps surrendered the game’s first goal in three of the four games for the week. Scoring first only in the 4-3 overtime win over St. Louis to open the week.

It was the third period on the defensive side that posed a problem for the Caps in Week 15.  Against St. Louis they allowed a third period goal to tie the game and send it to overtime.  They allowed the game-winner and an empty net goal to Carolina in a 3-1 loss.  They allowed one the following night to the Hurricanes to take a 3-2 lead before coming back to tie, and then to win the game late.

The Caps were more than the sum of their parts in Week 15.  Their special teams had their adventures, they allowed too many chances late in games that turned into leads for the opponents, and they allowed far too many shots, even if you subscribe to the “shot quality” theory of defense.  And if you go back above and look at their league rankings in a variety of statistical categories, you might be left asking yourself, “how is it that the Caps have the third-best record in the league?”

If you look at the week as half-full, instead of half-empty, there was the 5-on-5 goal differential, the Caps doubling up on opponents by an 8-4 margin.  But even there, the Caps’ 5-on-5 goals for/against ratio of 1.17 for the season overall is just seventh in the league, and their possession numbers are, well, not good, just 22nd in shot attempts-for percentage at 5-on-5 (48.38).  Plainly put, they are doing it with efficiency of dubious sustainability.  Their shooting plus save percentage at 5-on-5 (1023) is second in the league.

Now they get a week (actually, five full days) off before they resume their schedule against New Jersey next Thursday.  Even with that, the Caps are in the midst of a very light part of the season schedule.  From the end of their 4-3 win over Carolina until they face the Philadelphia Flyers on the last day of the month, the Caps will play only four games over an 18-day period.  That is an opportunity for a lot of rust to accumulate, and it will be something to watch for going forward.  But the Caps did pad their division lead with a good week in Week 15, a reason why even mid-season games have meaning.