Ken Campbell over at The Hockey News has an article up about Bruce Boudreau and his taking a trip to Niagara Falls, Ontario.

Not to sight-see, mind you, but rather...

Campbell notes that Boudreau is saving a few bucks -- Boudreau himself said that "I’m basically doing it so my son doesn’t have to pay...I said I’d help out with a practice and give their camp some validity if my son could attend for free."

But we wonder, given his history, if it just wasn't an excuse to get some hockey teaching in.
Posted by The Peerless at 8:24 PM No comments:

Email ThisBlogThis!Share to TwitterShare to FacebookShare to Pinterest
Labels: Boudreau

Shaone Morrisonn signed a one-year contract today for $1,975,000. That is the last of the major signings for the club for the summer, it would appear, and solidifies what would be the roster for the 2008-2009 season.

Well, not exactly. The deal leaves the club over the salary cap insofar as the likely parent roster is concerned: 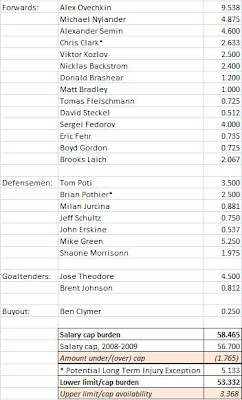 What it means is that the club is either going to be having Brian Pothier and/or Chris Clark on the shelf, or the Caps are going to be trading off someone.
Posted by The Peerless at 6:46 PM 3 comments: