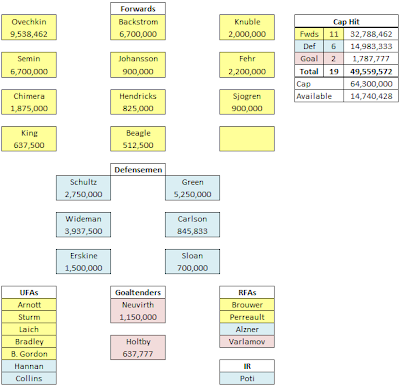 (click for larger version)
We assume, for the moment, that Tom Poti would be unavailable.  Still, there do appear to be roster spots available.  And you might want to ponder whether this team merits inclusion in any discussion of a Stanley Cup contender in 2011-2012.  We suspect there is work yet to be done on building this roster, even if you assume that RFAs such as Karl Alzner, or even Semyon Varlamov are to be signed.
Posted by The Peerless at 9:27 PM No comments:

Why Troy Brouwer Is As Important As Alex Ovechkin

As we were watching the draft last evening and saw the Edmonton Oilers pick first for the second consecutive season, we were caught up in the hope and optimism such an evening engenders. Young men taking the first step on their professional journey in the NHL, their families sharing the joy that comes as the culmination of so many early mornings and long miles supporting their sons and brothers, Pierre McGuire gushing on television about every single one of the 30 picks in the first round of the draft. How, as a hockey fan, could you help not be caught up in it?

Until reality sinks in. And that brings us to a number – nine. Consider the following roster of players:

And that brings us to a trade the Capitals made last night, sending the 26th overall pick in the 2011 draft to Chicago for Troy Brouwer. The former Blackhawk isn’t going to be making anyone’s short list of the best players in the NHL. He is a forward with some size (6’2”, 215), a physical edge (his 262 hits last season led the Blackhawks by a wide margin), a willingness to pay a price (he was second among Chicago forwards in blocked shots), and a bit of a scoring touch (49 goals over the last three seasons).

Two things might be more important than the numbers, though. First, he has a Stanley Cup on his resume. And it is not as if he was merely a bit player in the Blackhawks’ Stanley Cup drama in 2010. He started slowly enough, not recording a point in any of his first eight games, with a minus-five to go along with it. He was scratched for Games 3-5 in the second round series against Vancouver, a message delivered and apparently taken to heart. Beginning with the series-clinching Game 6 against Vancouver in the second round, Brouwer played in 11 playoff games, went 4-4-8, plus-4. He has big-game experience at the highest level of competition and showed an ability to compete.

Second, he is 25 years old. This is not a trivial consideration. The Caps have tried procuring leadership, playoff experience, and intangibles at the trading deadline. The trades for Sergei Fedorov and Jason Arnott are reflections of that. But each of those players was far on the back side of their respective careers. Not that either was running on empty as players, but they served more to address the intangibles of leadership and Cup experience that was lacking on this team. Brouwer will never be the high end skill player of a Fedorov, or an Arnott for that matter, but he has impressed the Caps as having the potential for leadership, and there is that ring on his finger – at age 25. The Caps might have a longer window for what Brouwer brings to the rink than for what Fedorov or Arnott brought.

So, about that trade. The practical effect of the trade the Caps made is Troy Brouwer for Phillip Danault, the player the Blackhawks selected with that 26th overall pick. Danault might become a fine NHL player. All of the descriptions you would hope to see in a first round pick attach to him – “tremendous worker,” “work ethic,” “leadership,” “pride.” But he is also two or three years away from reaching the NHL, that itself not being a certainty. For the Caps, Brouwer has a body of work, has experience, and can contribute now.

And that brings us to the here and now, and the plan. We’ve made a point persistently that the trick isn’t drafting an Alex Ovechkin. That’s not a “plan,” unless you think financial planning is buying a Powerball ticket. The history of first round picks that win a Cup with the team that drafted them is testimony to what it takes – and how hard it is – to build a roster around that top pick capable of winning a Stanley Cup. For the Caps, it’s in what a team builds around a pick like Ovechkin – or what a team builds around a Crosby, a Lecavalier, a Modano, a Lemieux.

While a draft-centric approach might suffice as a governing principle for how you build a roster, it can’t be the only means used to do so. Deals like this are part of building a roster around that cornerstone player and why Troy Brouwer might, in his own way, be as important as Alex Ovechkin to the Caps. Not so much for Brouwer himself, but in that trading for him, we will get another glimpse as to how well the Caps are doing in building that roster around their cornerstone.
Posted by The Peerless at 12:40 PM 2 comments: