The Peerless Prognosticator is ON THE AIR!!! -- Caps vs. Senators, November 23rd

Canada Weekend ends tonight for the Capitals, and it is a case of trying to keep it from being Lost Weekend. The Caps travel to Ottawa having lost to Montreal on Friday, then to Toronto in a Gimmick on Saturday. On paper, this is the toughest of the three, as the Senators come into this game occupying the 6th spot in the Eastern conference. This might be a surprise to some, inasmuch as the Senators finished last season in 11th place in the conference. But…

“Will the gentleman yield?...”

“Will the gentleman yield his time?...”

You have something to say, Senator? 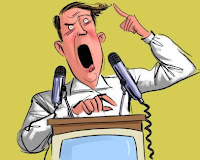 “Why yes, yes I do. I rise today to give praise to the Washington Capitals, a team that in a year of utter despair for its city’s sports fans has captured the hearts of a region. Despite the woeful records of the other local sports teams – the Redskins, the Wizards, the Nationals, the Mystics, the Terrapins, the Cavaliers, the… well, the rest of them, the Capitals have shined with a light that would light… well, a lot of things.”

You’re not very good at this.

“Hey, I’m a freshman, and they don’t let us make speeches these days.”

“We have to insert the page numbers in that health care bill. Have you seen that thing?”

I see. Well, then maybe you have higher aspirations?

“Oh, no. If you mean, will I run for President, that’s out of the question.”

"Well, over the course of history, we’ve had a lot of Presidents known only by their initials – FDR, JFK, LBJ. That sort of thing won’t work for me."

I see your point. But let us all rise and give praise to the Capitals, who despite having lost those games to Montreal and Toronto, still occupy the top spot in the Eastern Conference. They are on a pace to top last year’s record setting standings points total (111). They have three players scoring at a point-a-game or better pace and two more that are on a pace to top 70 points. They have a rookie who is playing in hockey’s most important position as if he will be in the Calder Trophy conversation in the spring. They have had a number of youngsters come down the road from Hershey and not just pull on a sweater, but make real contributions to the club as it works its way through injuries. And although what really matters will come in the spring, this is a very entertaining group to watch, called by the NHL Network in its television ads for next Saturday’s game against Montreal, “the most dynamic team in hockey.”

In Ottawa, they are probably counting theirs, given that most outlets seemed to have the Senators finishing south of the playoff line this season. But there the Senators are, sitting in sixth place in the East, six points behind the Caps with three games in hand. If you look at their summary numbers, it’s a bit hard to see how they’ve done it… 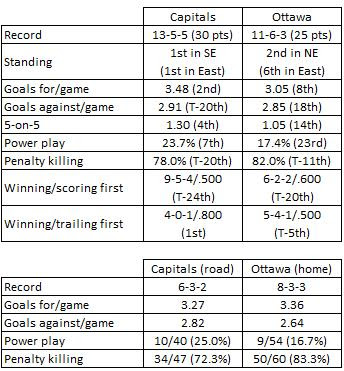 But here is a set of numbers you might pay some attention to… 6-1-3. That is Ottawa’s record in one-goal games. That could be a very important set of numbers, especially when you compare them to Washington’s numbers in such games – 5-4-5. More to the point, the Caps have won but one game in their last six one-goal decisions (1-2-3).

As for Ottawa, these are not your father’s – ok, your older brother’s – Senators. A few years ago, they could boast a high-powered attack anchored by what was arguably the most dominating first line in hockey with Daniel Alfredsson, Jason Spezza, and Dany Heatley. In 2005-2006, two of that group topped 100 points (Heatley and Alfredsson), and the third – Spezza – had 90 points and finished second in the league in assists.

Well, Heatley is gone, and this year, while they can score, the Senators just don’t do it to the level of those teams of the recent past. Alfredsson is still skating for the Senators and is sitting in his accustomed perch atop the Senators’ scoring rankings (8-15-23 in 20 games). Last year was the first year since the 2001-2002 season that he averaged less than a point a game (74 points in 79 games), but this year he’s on the far side of that threshold again. And he has had particular success against Washington. There is no other non-divisional opponent against whom he has scored more points than the Capitals (47 games, 31-24-55). If anything, he’s been more troublesome since the lockout. Before the lockout, Alfredsson was 23-14-37 in 34 games (1.09 PPG), but since then, he is 8-10-20 in 14 games (1.43 PPG). If that isn’t enough, he had a six-game streak without a goal (0-3-3) before he broke out with a two-goal, three-point performance against Buffalo on Saturday.

The last member of that old top line that remains – Jason Spezza – has had the kind of season that to date has to be considered disappointing. He started the season reasonably well in the playmaking aspects of his game – he had eight assists in his first ten games – but hadn’t registered a single goal. Then he missed two games to an upper body injury. He came back with a vengeance, getting a goal and two assists in his first game back, against the Lightning. But since then he has two points (both assists, in Saturday’s game against Buffalo) in his last seven games. He is on a pace to finish at or below his lowest point total for a full season in his career. He’s had reasonable success against the Caps (6-13-19 in 20 career games), but he has struggled in recent games (1-1-2 in his last seven).

Dany Heatley’s departure via trade to San Jose shines a light on the return – Milan Michalek and Jonathan Cheechoo. One would have to say that after 20 games the returns are mixed. Michalek – a very underrated goal scorer who worked too much in the Pacific time zone to get much attention in his first four full seasons – leads the team in goal scoring (10). He is well on his way to shattering his career high (26) set in 2006-2007. He comes into this game with a goal in each of his last three games, including the game-winner on Saturday against Buffalo.

On the other hand, Cheechoo has continued his inexplicable descent from his 56-goal season in 2005-2006. With a pair of goals and a pair of assists in 20 games, he’s tied for 15th in team scoring with Chris Neil and Peter Regin, and he is a team-worst minus-5. There are six Senator defensemen who have out-scored Cheechoo to date, two of them (Filip Kuba and Anton Volchenkov) having played no more than a dozen games apiece. Maybe he’s coming out of it, though. Both of his goals this season were scored in the past six games.

It seems like every team in the NHL has been smacked around by injuries, and Ottawa is no exception, especially on defense. Anton Volchankov, the human shot blocking machine (with apologies to the Caps’ Quintin Laing), is on injured reserve with a dislocated elbow. They missed Filip Kuba for eight games earlier in the year with a lower body injury, but he has since returned for 11 games in which he is 1-7-8, including a four-point night (1-3-4) against the Sabres on Saturday. The 5-3 win over the Sabres came at a further cost as goalie Pascal Leclaire failed to finish the game after Buffalo’s Jochen Hecht fell on him in a goal-mouth scramble. Leclaire will miss this game with the “lower body” injury that resulted.

Leclaire’s injury likely means that Brian Elliott will get the call for the Senators. Elliott hasn’t been bad – his win-loss record at 3-1-2 is pretty good as a back-up -- but his numbers haven’t sparkled in that role, either (2.90, .903). His history has been brief against the Capitals – 82 minutes in two appearances. His only decision was a 3-2 win at home last January. His other appearance was a 22-minute torture session in which he allowed four goals on 16 shots in a 7-4 loss in Washington.

1. Jump-Bump. After wins, Nicklas Backstom and Alex Ovechkin engage in a little jump-and-bump in celebration. Well, Backstrom is 0-1-1, minus-3, in his last five games, and Ovechkin is 2-0-2, even, in his last three since returning from injury. Not coincidentally, perhaps, the Caps are 2-2-1 in their last five games. Ovechkin will bear watching. He is 14-8-22 in his last 12 games against Ottawa overall, but hasn’t registered a point in either of his last two games in Ottawa.

3. Fight the feeling. This will be the Caps’ third game in four nights. Even with a day off on Sunday, this game could be something of a grind. It will be important for the Caps to get contributions from down the roster to give the team balance. It could also provide the sort of cushion that would leave a nuisance such as Jarkko Ruutu less inclined to engage in his special sort of Averyian hijinks.

The Caps are 9-3-1 in their last 13 games against Ottawa, but they are 3-3-1 in Ottawa over that span, splitting 40 goals evenly with the Senators. The Caps have held a lead at some point in every game they have played this season; the trick has been holding onto it once they have it. While they have outscored teams by 27-11 in the first period of games this year, they have been outscored 28-23 in the second period, giving away much of their early advantage. Good teams finish what they start. We’re going to go out on a limb here and think that the Caps will do just that…