In 11 full NHL seasons before the 2015-2016 season, Brook Orpik missed a total of 93 regular season games – fewer than nine games a year, not bad for a physical defenseman in the National Hockey League.  And when he dressed for the Caps’ first 14 games of this season, it looked as if Orpik would add to his list of seasons of dependable play.

In that 14th game, though, Orpik lasted just one shift into the second period of a game in Detroit against the Red Wings.  A “lower-body injury” was the verdict, and it would keep him out of the lineup for 40 games, his longest stint on the injured list in his career and almost as many games as he missed in the previous five seasons (44).

The odd part of it all was not so much getting injured.  It happens to players over the course of a season or a career.  What made this instance unique (although some might not think it so for hockey players) was that the injury actually took place in Game 9, almost two weeks earlier, against the Columbus Blue Jackets when Orpik blocked a shot and then aggravated the injury when he was kneed in the thigh.  The result was a cracked femur (thigh bone) on which he finished with more than 20 minutes of ice time against the Blue Jackets, then played in four more games before finally going down in the second period against the Red Wings on November 10th.

Orpik returned to the lineup on February 16th against the Los Angeles Kings and played in 27 straight game before sitting out the season finale against the Anaheim Ducks along with a few other Capitals regulars.  Even with appearing in just half of the Caps’ regular season games, Orpik finished fifth among defensemen in goals with three, a career high for a single season.  Coincidentally, his shooting percentage of 9.7 percent led the team’s defensemen and was a career best.  He finished in double digits in points (10) for the eighth consecutive full NHL season, not including the abbreviated 2012-2013 season.  His plus-11 was fourth-best among the Capitals’ defensemen.  The physical side of his game did not suffer from the absences, his 125 credited hits being third among the team’s defensemen and his 3.0 hits per game ranking sixth among all NHL defensemen appearing in at least 41 games. 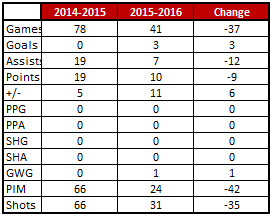 Fearless’ Take… Brooks Orpik might have had what for him were very good offensive numbers, but it hardly made him an offensive defenseman.  Evaluating his contributions, as it is for most defensive defensemen, can be something of an exercise in indirection.  In 12 games in which he was a “plus” player for the season, the Caps were 11-0-1.  In 19 games in which he logged at least 20 minutes of ice time, the Caps were 15-1-3.  They were 8-2-0 in games in which he recorded at least five hits.  When Orpik was “Orpik” – steady, physical, capable of a significant minutes load – the Caps did well.

When the Caps took the ice on February 20th against the New Jersey Devils, it was Brooks Orpik’s 798th career regular season game.  In the 797 games that came before it, Orpik never experienced scoring a game-winning goal.  That changed with this game.  The teams alternated goals over the first 55 minutes, dueling to a 3-3 lead late into the third period.  Then, with the clock inching toward the four-minutes remaining mark, Evgeny Kuznetsov took a feed from Alex Ovechkin behind the Devils’ net.  He backed off toward the corner to the right of goalie Cory Schneider, showing as if he was going to send the puck to the front of the net.  Justin Williams did his part in the ruse, cutting to the net and pulling Lee Stempniak just ever so slightly to the inside.  It created a passing lane for Kuznetsov to find Orpik filling in at the left wing faceoff dot.  The pass was placed right on Orpik’s stick, and he did not waste the chance, snapping a shot over Schneider’s right shoulder for what would be his first career regular season game-winning goal in a 4-3 Caps win.

There are, from time to time, those games in which everything bad happens when you are on the ice.  So it was for Orpik at Madison Square Garden on November 3rd.  In his first ten games of the season, Orpik did not record a “minus” game.  That changed in a big way in this game.  First, he was locked up with Viktor Stalberg in the slot when Oscar Lindberg opened the scoring early in the first period.  Later in the period he was caught as the last Cap back on a 2-on-2 Ranger rush that Kevin Hayes finished to make it 2-1.  Seven minutes into the second period, with the Rangers holding a 3-1 lead, he was on ice when Derick Brassard scored to make it 4-1.  Then, four seconds after stepping onto the ice after serving a penalty (the Caps’ only penalty of the game), he had no chance to get back into the play to prevent Jarret Stoll from scoring his first goal as a Ranger in a 5-2 Blueshirts win.  Orpik was on ice for four goals in 15 minutes and change of ice time and was a minus-4, the only game all season in which he finished worse than a minus-1.  It was the first time he was a minus-4 since recording one in an 8-4 Pittsburgh Penguin loss to the Ottawa Senators on March 24, 2012.

The postseason is a time of year any player looks forward to, but when looking back upon this one, Brooks Orpik might utter one word…”yeesh.”   Let’s leave the scoring (or lack of it) out of the discussion.  He’s not an offensive defenseman, and points would be few and far between.  But the rest of it…yeesh.  There was this hit by Ryan White on Orpik in Game 3 of the opening round against the Flyers…

He missed the last three games of that series but returned for the opener of the second round series against the Pittsburgh Penguins.  The first game wasn’t the problem; the second one was.  Early in the first period he caught Olli Maatta with a late hit in the defensive zone…

That hit cost him three games, courtesy of the Department of Player Safety.  He did return for Game 6 in what would be the last game for the Caps in the 2015-2016 season, a 4-3 overtime loss to the Pens.  It was not the sort of postseason a wise veteran would want featured on his resume.  But even here there was a subtext.  Chances are he was not entirely 100 percent from the cracked femur suffered in the regular season, and he ended up playing after suffering a concussion and neck injury with the Ryan White hit in the Flyer series.

It is hard to say that Brooks Orpik showed his age (35) in this season.  Injuries happen (remember the unfortunate series of leg injuries Jack Hillen suffered as a Capital).  When he was available in the 2015-2016 season he played reasonably well, but the wear and tear on his body this season was significant, raising the issue of what sort of future level of performance Orpik might enjoy with the club.  It seems odd to think of a 35-year old as having question marks, but even if Goethe was right, that age merely shows what children we remain, age is not kind to those who would play a children’s game.