The Peerless Prognosticator is ON THE AIR!!! -- Game 71: Capitals at Flyers, March 14th

The Washington Capitals continue the Pennsylvania leg of their four-game road trip on Thursday night with a visit to Philadelphia to face the Flyers at Wells Fargo Center.  The Caps will be looking to repeat the result they achieved on March 6th, when they beat the Flyers, 5-3, on that ice sheet.  From the other side, the Flyers will be trying to keep their flickering playoff hopes from being all but extinguished with a dozen games left in the season.

The Flyers have done their best to keep those dim playoff hopes from winking out, going 6-1-1 over their last seven games since February 23rd.  Over those eight games, the Flyers outscored their opponents, 33-22.  The 13 standings points they have earned in that span are one off the league best in that span, a total shared by four teams (although the Flyers have played one fewer game than all four of those teams).

What the Flyers have done in their successful run of late is get dependable goal scoring from a core of players.  Of the 33 goals scored by the team over those eight games, four players have four or more and account for more than half the total (17).  James van Riemsdyk leads that group with five, while Travis Konecny, Travis Sanheim, and Sean Couturier have four apiece.  Couturier, who until last season had never recorded more than 15 goals in any of his first six NHL seasons (all with the Flyers), has demonstrated that last year’s 31-goal season was no fluke.  He goes into this game with 28 goals in 67 games and is on a pace (33) to set a new personal record.   His record over his last 27 games has been amazing – 13-23-36, plus-20, since January 8th, and he has not had consecutive games without a point in that span of games.  It might the helpful to watch Couturier closely when the Flyers have a power play.  He has five of his six power play goals this season on home ice.  In two games against the Caps this season, Couturier is without a goal, but he does have four assists.  He is 6-13-19, plus-10, in 27 career games against the Caps.

Claude Giroux leads the team in points in their eight-game run (3-9-12).  Giroux has spent more time in a Flyers uniform – 807 games – than all but three players in franchise history (Bobby Clarke: 1,144 games and Bill Barber: 903 games).  His next goal (his 235th) will tie Rod Brind’Amour for tenth place on the Flyers’ all-time goal scoring list.  Only Clarke stands ahead of him in assists (852) as a Flyer (Giroux has 516), and Giroux is fourth in points (750) in Flyers history.  If this season pales some compared to last year, it is because he had a career year in 2017-2018. He had his first 30-goal season (34), his first season with more than 65 assists (68), and posted his first 100-point season (102).  As it is, Giroux has already reached the 20-goal mark for the seventh time in his 12-year career and is on pace to finish with 87 points, which would be his fourth season topping 85 points.

Carter Hart is expected to return to the Flyers’ net Thursday for the first time in three weeks after suffering an ankle injury in a 5-1 loss to the Montreal Canadiens.  Including that game, the Flyers are 6-2-1.  In Hart’s absence, Brian Elliott and Cam Talbot combined for a 2.71 goals against average and a .919 save percentage, slightly better than the 2.79 and .917 that Hart has compiled in his 22 appearances to date.  However, Hart is the goalie of the future, especially given the fact that Elliott will turn 34 years of age next month, and Talbot will turn 32 years old in June.  Both are unrestricted free agents after this season.

Hart is going to be trying to get back on the ice a more efficient and effective goaltender than he was leading up to his injury hiatus.  In his last five appearances, including the one in which he was injured, he was 2-3-0, 4.50, .876, and was pulled ten minutes into his last appearance before the one in which he was injured after allowing three goals on nine shots against Tampa Bay.  If there is one thing that can be said of Hart, it is that as a rookie, he has not leaned on the friendly confines of home ice to build a disproportionately fine record.  However, he has been sheltered to an extent by his coaches so that he does not get a lot of road action.  He is 10-4-1, 2.76, .919 at home this season , while he is 3-4-0, 2.89, .911 on the road.  This will be Hart’s first appearance against Washington. 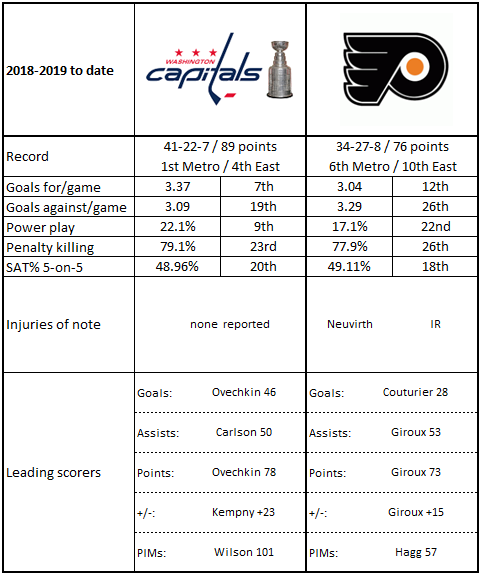 1.  The Flyers have a winning record at home this season at 18-13-4, but they are under water in goal differential, scoring 107 goals but allowing 111 at Wells Fargo Center.  Part of their problem is that in the East, only Columbus has lost more games by three or more goals on home ice this season (ten) than the Flyers (seven, tied with Montreal and Pittsburgh).

2.  The Flyers have a weakness on the penalty kill on home ice.  At 77.0 percent, they rank 24th in the league and have the third-worst penalty kill in the East, better only than Pittsburgh (74.7 percent) and Detroit (74.5 percent).

4.  If a shorthanded goal is going to be scored, chances are that the Caps will score it.  The Flyers have allowed five shorthanded goals at home this season while scoring only one (Michael Raffl, on February 9th against Anaheim).

5.  The Flyers remain an ornery team in one respect.  No team in the NHL has logged more misconduct penalties on home ice this season (three ten-minute and two game misconducts).

2.  The Caps have taken 126 minor penalties on the road this season, third-most among Eastern Conference teams (Tampa Bay: 131; Carolina: 130).

5.  The Caps have steadily improved their possession numbers over the second half of the season so that they now rank 14th in shot attempts-for percentage at 5-on-5 (49.18).

Sean Couturier has been a man on fire lately, but in terms of goal scoring on home ice this season, he is the only player with more goals at Wells Fargo Center (15) than Travis Konecny (14).  He is one of those players who flies under the radar for this club.  Consider that over his three NHL seasons, only Claude Giroux and Jakub Voracek have appeared in more games (233 and 230, respectively) among forwards than Konecny (220).  His 57 goals in that span is topped only by Voracek (58), Giroux (68), and Couturier (73) among active Flyer forwards.  Only Couturier has more game-winning goals (12) among active forwards over the last three seasons than Konecny (nine).  Only Giroux has more overtime goals (four) than does he (three).  And, he has done this while averaging less than 15 minutes a game (14:44), eighth among 19 Flyer forwards appearing in at least 50 games over the last three seasons.  He comes into this game on a nice run of late, going 11-9-20, plus-8, in his last 22 games overall.  Konecny is 6-5-11, plus-5, in his last 12 games on home ice.  In nine career games against Washington, Konecny is 2-0-2, plus-1.

Nicklas Backstrom recorded the first multi-point game of his career in Philadelphia on November 23, 2007, posting a pair of assists in regulation before potting the game-winning goal 1:55 into overtime to stop a five-game losing streak and make Bruce Boudreau a winner in his NHL coaching debut.  It also happened to be Backstrom’s 20th birthday.  Nicklas Backstrom has since been among the most consistent players in the NHL, and he is on the brink of hitting some marks that bear that out.  He has 18 goals and with two more would hit the 20-goal mark for the fourth straight season and sixth time in his career. His next assist will be his 50th, the sixth straight time and ninth time in 12 seasons he will have reached that mark.  Backstrom needs three points to hit 70 points for the sixth straight season and ninth in his career.

The trick for any successful team is to keep a loss from becoming a losing streak.  This is something that the Caps have been very adept at over the last seven weeks.  Washington has not lost consecutive games since the All-Star Game break and has gone 14-5-1 in that stretch.  The key to that here might be to button up a defense that allowed four goals (plus one into an empty net) after not allowing as many as four goals in any of its previous six games (a total of nine).  That will be a tall order against a club that has 53 goals scored in its last 14 home games, seven of those games finishing with four or more goals for the Flyers.  It does not get easier.