The Peerless Prognosticator is ON THE AIR!!! -- Game 5: Flames at Capitals: October 23

The Washington Capitals play host to the Calgary Flames on Saturday in the first matinee game (a 1:00 start) of the season for the Caps.  Washington is coming off a 4-1 win over the New Jersey Devils.  Meanwhile, the Flames arrive in Washington fresh off a 3-0 whitewashing of the Detroit Red Wings in Detroit on Thursday night.

Darryl Sutter is starting his first full season with this group after finished 15-15-0 last season in relief of Ryan Huska, who relieved Geoff Ward, who was relieved of his duties after a year and a half at the helm.  This is not Sutter’s first tour in Calgary.  He coached the Flames for three seasons – 2002-2003 through 2005-2006 – posting a record of 122-89-16 (15 ties) and leading the Flames to the Stanley Cup final in 2004 where they lost in seven games to the Tampa Bay Lightning. 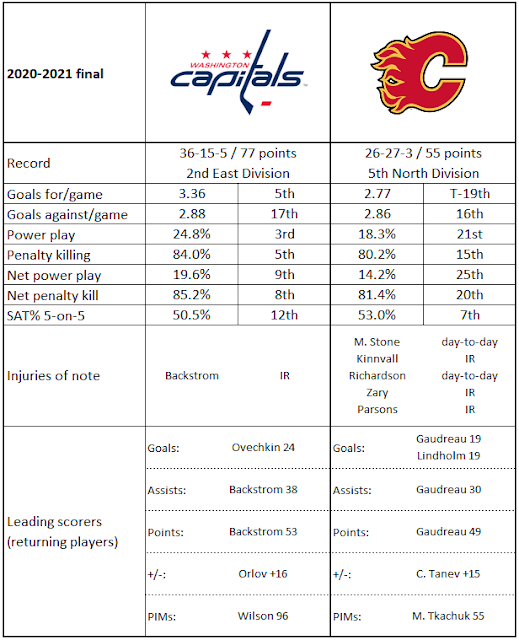 2.  Calgary ranks tied for 22nd in scoring offense, but it is not for lack of trying.  Their 39.7 shots per game rank second in the league to Boston (40.0 shots per game).

5.  Nineteen of the 20 skaters for Calgary have been credited with at least one hit so far this season.  Johnny Gaudreau is the only skater without one.

2.  If they take three penalties against the Flames, the Caps will have taken 100 penalties in the all-time series against Calgary.

3.  Who leads the Caps in credited hits so far?  Tom Wilson…no.  Alex Ovechkin…no.  Garnet Hathaway…no.  Nick Jensen and Martin Fehervary are tied for the team lead with nine apiece and lead in hits per 60 minutes – Fehervary with 7.06 and Jensen with 6.94.

4.  The Caps are fifth in the league in missed shots (51), but only two of them are the product of hitting iron --  Alex Ovechkin and Tom Wilson each have hit a post once.  The Caps come by their misses honestly…they miss.

At the 100,000 -foot level, Calgary goaltender Jacob Marstrom is off to a fine start.  His 2.30 goals against average is the best of his 12-year career by a third of a goal per 60 minutes.  His save percentage of .924 is the best of his career.  But look deeper.  It is a small sample of games (three), and the overall numbers are skewed by virtue of his 33-save shutout of Detroit on Thursday.  In his first two games he stopped 28 of 32 shots in a loss to Edmonton (a .875 save percentage) and stopped 24 of 27 shots in an overtime loss to Anaheim (a .889 save percentage).  It begs the question, was the shutout over Detroit an outlier, or is he getting his game into a good place?

Markstrom’s recent history would suggest his overall numbers are not sustainable.  He has been consistent in his ability to stop pucks, five times in the last six seasons posting save percentages between .910 and .918 (all with Vancouver), the exception being last season when he was at .904 in his first season with the Flames.  It is the profile of a solid, if not elite netminder, but given the Flames’ early difficulty in scoring, he will need to be more than solid.  Markstrom is 1-7-1, 3.23, .898, in nine career appearances against Washington.

Anthony Mantha finds himself in a good place to start the season, having recorded two goals and an assist to go with a plus-1 rating through four games.  He seems to be doing the things necessary for a big man to produce.  Establish position close-in to screen goalies and be in a position to receive passes (as in Thursday night’s goal against New Jersey) or pounce on rebounds, and use his reach and frame to protect the puck.  It is a good place to be for a player who has had success, albeit in limited action, against the upcoming opponent.

Mantha has played but seven games against Calgary in his career, but he has at least one point in all of them, including a pair of three-point games less than a week apart in November 2017, and he has goals in four of those games, three of them on power plays, and one of them the game-winner in Detroit’s only win among those seven games (5-6-11, even, overall in those seven games and a 20.8 shooting percentage).  That Detroit went 1-5-1 in those seven games is more a statement on the level of talent on the Red Wings roster at the time.  It would not be surprising to see Mantha have a productive game.

Calgary seems to be a team mired in mediocrity.  Since winning the Northwest Division in 2005-2006, coming out of the 2004-2005 lockout, the Flames have one division win 15 seasons coming into this season, that coming in 2018-2019 when they posted a 50-25-7 record in the Pacific Division.  Over that period they have three second-place division finishes, five third-place finishes, two fourth-place finishes, three fifth-place finishes, and a sixth-place finish.  They have seven playoff appearances over that span but only one series win, a 4-2 series win over Vancouver in 2015.

The Caps have not faced the Flames since November 2019, but they do bring a four-game winning streak against Calgary into this game, outscoring the Flames, 16-11, and with solid special teams numbers (25.0 percent power play, 83.3 percent penalty kill).  The wild card for the Caps in this game is in goal, where Ilya Samsonov is the only one of the Caps’ tandem to have faced the Flames, that being a 25-save effort in a 4-2 Caps win in November 2019 in what was his sixth NHL appearance.  Nevertheless, the Caps seem to have too much skill among the skaters and too much momentum getting out of the gate to start the season to let this one get away.

Posted by The Peerless at 5:53 PM No comments: