The Peerless Prognosticator is ON THE AIR!!! -- Caps vs. Blue Jackets, January 9th

It’s Hockey Friday in DC, and the next victims…uh, guests to Verizon Center are the Columbus Blue Jackets. You will recall that the Jackets defeated the Caps in the last game of November, 3-0, on a 26-save effort by goalie Steve Mason. Since then, however, the Caps are 14-5-0. The Jackets are 8-8-1, stuck pretty much were they were after they beat Washington (10-10-3). The numbers for the year look like this... 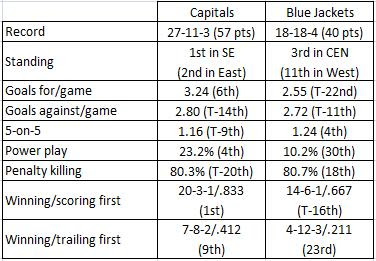 “I beg your pardon, sir…but I was wondering about one thing…”

Well, I’ll be…the rumpled overcoat, the cigar, the hunched shoulders…it’s got to be our favorite detective, “Columbo.” What brings you here, Detective?

“I was just wondering…you said that the Jackets defeated the Caps, is that right?”

“Now…why do you suppose that is, sir? I would have thought that the Jackets were a very, very poor hockey team.”

Well, not as much as you might think. They won’t be confused with the Detroit Red Wings, but right now they are only three points out of a playoff spot in the West.

“That’s very interesting…but if you don’t mind, there are a couple of loose ends I'd like to tie up. Nothing important you understand…”

Not at all, go right ahead.

“I see here that you didn’t blog – I hope I’m using the right word here – on the Columbus game. Why is that, sir?”

It was Thanksgiving weekend, and I was out of town.

“So, you didn’t have access to a computer, then…”

“And do you think that your not being able to write a blog about that game had anything to do with the Jackets winning?”

I think it had more to do with Steve Mason playing a great game.

The rookie goaltender for Columbo…uh, Columbus. He’s had a great year so far.

Tops in goals-against average and save percentage (1.82, .934), not to mention he’s tied for the league lead in shutouts (five).

“He sounds like a fine young player. What can you tell me about….Rick Nash, if I may ask?”

He’d be the leading scorer on the team (17-22-39), six goals in six career games against the Caps. He had a pair in that game in November. Seems to have run into a ditch, though. Four goals in his last 15 games, although he does have eight helpers in his last five games.

Assists. Nash leads the team in both goals scored and assists.

"Do you realize that he's going to be out for this one?"

“I see…this is all very helpful. Do you know of any accomplices, sir…anyone who might give aid or help to Nash?”

If you mean other Columbus skaters, well, I would say that Derick Brassard is having a fine year…until he got into a fight with James Neal of the Dallas Stars and separated his shoulder. He was right on Nash’s tail for top scorer on the team when he went down (10-15-25 in 31 games). Now, it’s up to Kristian Huselius, R. J. Umberger, and Fredrik Modin to pick up the slack.

“Can you tell me any more about those gentlemen…I know this is an inconvenience, sir, but you really are being helpful…”

Well, Huselius is now the second leading scorer for Columbus among players who aren’t injured (12-13-25), but he only has three goals in his last 15 games and only ten points overall. He’s even done pretty well at both ends – he halved the -10 he had five games ago. And, he’s 5-4-9 in 19 games against the Caps, so he’s had a little success there.

Umberger’s a burly sort of guy who can play in traffic. He came over in a free agent deal after having a breakout playoff – ten goals in 17 games. But he’s only got 11 goals for the season, and only four in his last 23 games after netting a pair against Buffalo in mid-November. Maybe “Umberger” is an alias…he’s really “R.J. Druce.”

Sorry…John Druce was a Cap who had a big playoff run some years back. He had 14 goals in 15 games in the 1990 playoffs, then had years of 22, 19, and six goals before the Caps shipped him to Winnipeg.

“I see…and about this fellow, ‘Fredrik Modin?’”

A big slap shot – can crack diamond with it. He’s only got eight goals this year, but he has 14 in 37 games against the Caps over his career. But he’s another one who has had trouble finding the back of the net lately – one goal in his last ten games. Is this information helpful, Detective? You’re asking a lot of questions, but I’m not seeing the point of it.

“I don't think it's proving anything. As a matter of fact I don't even know what it means. It's just one of those things that gets in my head and keeps rolling around in there like a marble. But if I might, sir, is there anyone else you can tell me about?”

They have another pretty good rookie in Jakub Voracek. 16 points in 39 games, but this isn’t his time, yet. They’re kind of spoon-feeding him for now – only 12 minutes a night. But he’s going to be a good one.

“I guess it would be a big help to me if you could share with me what you know about the defensemen. Anyone I should pay particular attention to?”

Well, Caps fans will recognize Mike Commodore. He spent three years in Carolina playing a lot of games against the Caps before he was traded to Ottawa last year. He looks to be having a better time of it in Columbus. He’s on a pace to have his best statistical season; he’s 3-15-18, +10 so far, and if he keeps that up, he’ll have his best numbers in his career in each category. He hasn’t put up big numbers against the Caps – only a goal and an assist in 20 career games – but he’s an ornery sort of guy you have to look out for.

Caps fans might also remember Fedor Tyutin, who played for the New York Rangers for four seasons before landing in Columbus. He’s the second leading scorer among the defensemen, but hasn’t had a point in his last eight games. But he does lead the group in ice time and had one of the team’s three shorthanded goals this year. Detective, do you have all you need? What are you so worried about?

“I worry. I mean, little things bother me. I'm a worrier. I mean, little insignificant details - I lose my appetite. I can't eat. My wife, she says to me, ‘"you know, you can really be pain.’"

You sure can be…if you don’t mind, we’ll just cut to…

This is part of “the game within the game” segment. Malhotra is not a big scorer – 4-5-9 in 35 games this year, and he’s only 1-3-4 in his last 23 games. But among players having taken 400 faceoffs this year, he ranks fourth in the league at 58.6 percent. Oddly enough, he barely cracks the top 50 in draws taken (45th with 551 faceoffs taken), but one would think he’d be out there for important ones. For a team that is as offensively challenged as the Blue Jackets have been lately – they’ve scored more than two goals only twice in their last eight games and have been shut out three times – the little things matter, and this is one that Malhotra does well.

Backstrom doesn’t have much of a history against the Blue Jackets – two games, 0-1-1, -3. But in this one he might be the counterpoint to Malhotra. Backstrom has not been over 50 percent in the circle in his last dozen games and hasn’t topped the one-third success threshold in his last five. One might regard that as picky regarding a player who is otherwise 2-16-18 in those last dozen games. However, Columbus is one of those teams that, while struggling to win more than they lose, play games close. And when they do, they are successful (14-10-4 in games decided by one or two goals). So, taking care of business in the small, as well as the big things, could be important, and that might mean improving on his recent faceoff record.

This is a game fraught with trouble for the Caps. The team they face is one they don’t see often, one that isn’t particularly successful, and there is a big game coming on the heels of this contest, in Montreal tomorrow night. And, Columbus already has beaten the Caps, so don’t expect them to come bearing any sense of awe over their opponent, even if they have lost only one game in regulation at home this year.

But the Caps have been taking care of business lately and have found ways to win when perhaps giving their “B” effort. The Caps have enough talent, and hopefully a clear enough memory of the game in Columbus, to get past this team. As you suspect, we think they will…

Is that enough, Detective?...Is this what you needed?

“Well, sir, if it isn’t too inconvenient, just one more thing…"

I hate this guy…

Posted by The Peerless at 6:12 PM No comments:

To Boss Cap, himself. It might interest one to know that Ted shares this birthday with, among others...

Guess the guys really ought to win tomorrow night, huh? Birthday gift, and all that...

Posted by The Peerless at 1:40 PM No comments:

Email ThisBlogThis!Share to TwitterShare to FacebookShare to Pinterest
Labels: Leonsis 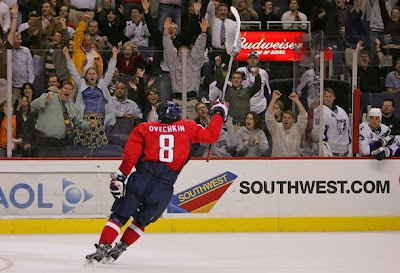 Well, the rosters are now complete for the Eastern Conference team playing in the All Star Game later this month, and Alex Ovechkin is on it.
That's the good news.
The bad is that he will be the only Capitals representative at the All Star Game in Montreal on January 25th. Mike Green was not selected, nor was Nicklas Backstrom. Backstrom was a longshot for this event, but Green's absence has the flavor of a voting related incident. Mike Komisarek -- a fine defenseman in his own right -- will start as a product of techno-ballot-stuffing.
Are there five hockey fans in North America outside of Montreal who think Komisarek should be there instead of Green?
Posted by The Peerless at 1:09 PM 5 comments: 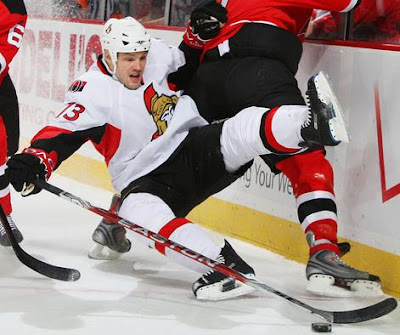 "I thought it was the chicken fingers I ordered."
"Mmmmmm....better'n Buffalo wings, that's for sure."
"And gloves are good roughage."
"Hey, there's no penalty in the rule book for 'snacking.'"
"In Finland, it's good luck to bite the finger of a loved one to start the new year."
"Good thing I didn't try the Jason Pomingranteville or the Daniel Paille-a."
Posted by The Peerless at 9:44 AM 2 comments:

Email ThisBlogThis!Share to TwitterShare to FacebookShare to Pinterest
Labels: ruutu, things that make you go 'hmm...'

In the AHL, there is one goalie who ranks in the top five in wins, goals against average, and save percentage. Which one is it?

We've provided a hint.
Posted by The Peerless at 6:42 AM 2 comments: