The Peerless Prognosticator is ON THE AIR!!! -- Game 17: Capitals at Red Wings, November 18th

The Washington Capitals spent a brief, if unsuccessful, respite at home for one game last week, and now they return to the Motor City for their second contest against the Detroit Red Wings in eight days on Wednesday night.  What Caps fans will be hoping for is that the Caps do not repeat their effort in a 1-0 loss to the Wings last Tuesday.

Where they have had problems is just in good old fashioned shooting.  While their overall shooting percentage was 14.0 percent in their first seven games, when they scored 29 goals on 207 shots (4.14 goals per game), they are shooting just 6.9 percent in their last nine games (20 goals on 291 shots).  If anything, their scoring defense has been better in the 5-3-1 stretch, allowing just 19 goals on 234 shots (8.1 percent/2.11 goals per game), compared to their opening seven game span when they allowed 18 goals on 169 shots (10.7 percent/2.57 goals per game).

You would have to think the pendulum will swing back once more at some point with respect to shooting efficiency.  It would be nice if that would happen against the Red Wings, who are having some troubles on offense of their own.  Going into Tuesday’s games, the Wings were 25th in the league in scoring offense (2.28 goals per game) and have only 13 goals in seven games in November (11 in regulation).  All four of their wins this month (a 4-3-0 record) have been by one goal, and they do not have a win of three or more goals this season since Opening Night in a 4-0 win over the Toronto Maple Leafs.  The only win Detroit has this month against a team that has won more than half the games they have played this season was their 1-0 win over the Caps last week.

The Red Wings have had similar shooting efficiency problems to those the Caps have had recently.  In November, the Red Wings have just 13 goals on 190 shots (6.8 percent).  Only once – their 4-3 overtime win over Ottawa on Monday – have they recorded more than two goals.  Fortunately, their defense has been pretty good, although there is an uneven aspect to it.  They allowed just one goal in each of their first two games this month, both 2-1 wins over Tampa Bay and in overtime over Toronto, respectively, but since then they have allowed three or more goals in four of five games.  Only their shutout of the Caps interrupted that streak. 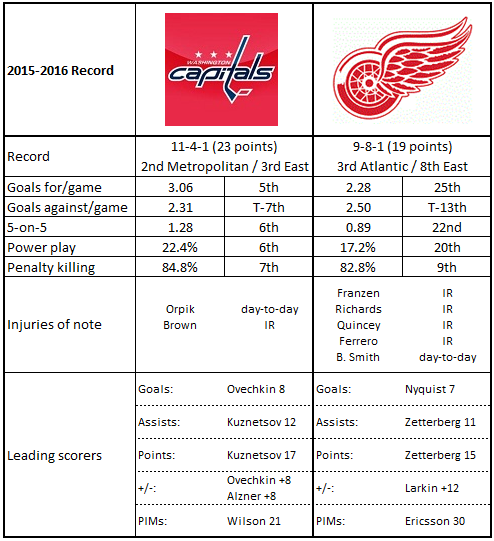 1.  Tomas Tatar is Detroit’s leading scorer in November (2-3-5).  He would be a player to watch if this game goes to overtime.  He had points on both overtime game-winning goals this month for the Red Wings, earning a secondary assist on Jakub Kindl’s game-winner in a 2-1 win over Toronto, and scoring the game-winner himself in overtime of the Red Wings’ 4-3 win over Ottawa on Monday.

2.  Mike “Mr. Helping Helper” Green has assists on four of the 13 goals scored by the Wings this month to lead the team.  He is still looking for that first goal as a Red Wing, though.  The odd part of that is, of the six defensemen for the Wings to have appeared in 12 or more games so far, he and Nicklas Kronwall (71 goals in 674 career games coming into this season) are the only ones without a goal.

3.  The Wings, if not prolific on offense in November, are balanced.  Five different players have two goals this month – Riley Sheahan, Tomas Tatar, Dylan Larkin, Gustav Nyquist, and Andreas Athanasiou.

4.  Detroit’s special teams have struggled this month.  Their special teams index (power play plus penalty killing percentages) of 93.8 is a level that will not sustain winning on a long-term basis.  The problem is more the power play (10.5 percent) than the penalty kill (83.3 percent).  Perhaps it is one of those streaky things.  After all, the Red Wings closed October with six power play goals on 20 opportunities (30.0 percent) over the last five games of the month.

5.  The Red Wings have a streak of five games in which they were on the good side of 50 percent in the possession numbers.  Their Corsi-for percentages overall, score adjusted, and in close score situations over those five games of 56.1/55.9/53.6, respectively, are quite…respectable (numbers from war-on-ice.com).

1.  In this nine-game offensive drought, the Caps are led in total scoring by Alex Ovechkin and Justin Williams with seven points apiece.  Both players have five-game points streaks as a part of their production, although Ovechkin is on a three-game slide without a point.

2.  Ovechkin, as you might expect, leads the Caps in goals over this nine-game span (3), but he does not have one in his last three contests.  What is noteworthy is that the Caps have a similar profile to that of the Wings in their recent offensive slump.  Six other Capitals have two goals apiece – Evgeny Kuznetsov, Justin Williams, Nicklas Backstrom, T.J. Oshie, Jay Beagle, and Jason Chimera.

3.  Williams leads with five assists over the last nine games, while three other Caps have four apiece – Karl Alzner, Kuznetsov, and Ovechkin.

It is hard to believe that Henrik Zetterberg is now in his 13th season in the NHL.  It has been a season of milestones for him so far this season.  In a 5-3 win over the Ottawa Senators on Hallowe’en, he recorded two assists, the first his 500th helper of his career and the second being his 800th career point.  A week later he scored a goal in Detroit’s 2-1 overtime win over the Toronto Maple Leafs, his 300th NHL goal.  It was also his last goal to date.  Zetterberg is without a point in his last five games, reflecting the fact that despite the milestones reached, this is not the fastest of starts for the 35-year old forward.  His current goals-per-game pace (0.22/game) matches the lowest of his career, set last season.  His points per game, while still at a very productive level (0.83/game) is the lowest since his sophomore season in 2003-2004 (0.70).  He certainly has missed the presence of Pavel Datsyuk in the lineup (he only recently returned to the lineup and has played in three games this season), and he is still performing at a high level, but time might be slowly inching up on him to tap him on the shoulder, too.  In 15 career games against Washington, Zetterberg is 5-6-11, minus-1.

Is notice being taken with respect to Tom Wilson's style of play?  Since Wilson’s 2013-2014 rookie season, only 22 players in the league have more hits, and only four players have more penalty minutes.  Only Cody McLeod has both more hits (461 to 446) and more penalty minutes (356 to 344) than Wilson in that time.  McLeod has about 70 more total minutes of ice time over that span than Wilson.  But now, it seems Wilson’s style is getting attention off the ice.  In his weekly “30 Thoughts” feature, Elliotte Friedman wrote this:

While it is difficult to put Wilson in the same category at Rinaldo or Downie, there can be no argument that Wilson employs an enthusiastic physical style.  While it would be helpful to know the nature of the complaints against Wilson and the degree to which they differ in description from the sorts of antics employed by Downie or Rinaldo, Wilson might be a man under the microscope for the time being.  He does not have a point and is a minus-1 in seven career games against the Red Wings.

The Caps are 5-3-1 in their last nine games, and given that the offense has been missing a beat here and there, it is not that bad a record.  The defense and goaltending have been very good in the meantime.  Allowing 19 goals in nine games and just 25 shots per game over that span are fine numbers, indeed.  Of the two, the defensive numbers might be the more sustainable over time.  Certainly, Caps fans hope so, and given the offensive talent and depth on this team, the mini-funk they are in would be expected to have a short shelf life.  They do not really get a break against the Red Wings, who have been stingy in their end of the ice in recent games as well.  It might make for a boring game for those wanting more fireworks, but a win is a win, whether it is of the 7-4 variety that the Caps pinned on Edmonton or…