The Peerless Prognosticator is ON THE AIR!!! -- Game 70: Capitals at Ducks, March 18th

Which brings us to the Anaheim Ducks.  The Ducks are celebrating their 20th season in the NHL.  It is rather remarkable, seeing as how the Ducks have outlived the Storm (ended operations in 2005), Splash (1997), Surf (2002), Rams (1994), and Piranhas (1997), not to mention the Anaheim Bullfrogs roller hockey team (1999), Southern California Surf ABA 2000 team (2002), and Anaheim Arsenal NBA Development League team (2009).  When you add to this the fact that the Ducks are a two-time Stanley Cup finalist and Cup winner in 2007, they have a history as rich in its own way – by Southern California standards – as the Montreal Canadiens.

The 2013-2014 edition of the Ducks are seeking to add to this rich history.  Their 45 wins to date are within three wins of a franchise record for a regular season (48, set in their Stanley Cup year).  Their 97 standings points is fifth highest in franchise history (110 being the highest in 2006-2007).

And here is some more tortured history to chew on. Before this season two coaches in Anaheim history won 40 or more games.  Mike Babcock did it in 2002-2003.  Randy Carlyle did it five times.  Both coaches took Ducks teams to Cup finals, Babcock in 2003 and Carlyle in 2007.  And that brings us to Bruce Boudreau, who this year became the third coach in Anaheim history to lead the team to 40 or more wins (45 and counting).

Boudreau is no stranger to 40-win seasons in the NHL.  He has done it four times seven seasons and barely missed the mark in a year in which he was fired.  In 2011-2012 he was relieved of his duties with the Washington Capitals after going 12-9-1, then won 27 games with the Ducks to finish the season 39-32-9 overall.  In the only two seasons he did not get that close he posted 37 wins in 61 games after taking over the Caps from Glen Hanlon in 2007-2008, and he won 30 games in last year’s abbreviated 48 game season (a 51-win pace).

If only that success had currency in the post-season.  Boudreau is 20-24 in five playoff seasons and has won two of seven playoff series in which he has coached, never escaping the second round.  Even more excruciating, he has coached in seven-game series five times, losing four of them.

Boudreau will get another bite at that playoff apple, but at the moment the task for the Ducks is heading off into the post-season on a high note.  One could argue that the high note of the Ducks’ season to date was their 3-0 win over the Los Angeles Kings in the Stadium Series game at Dodger Stadium on January 25th.  Based on the Ducks’ record since, one might have to agree.

Since beating the Kings in the great outdoors, Anaheim is 6-6-2.  Worse, they are 3-5-2 at home after starting the season 21-1-2 at Honda Center.  The difficulties have not been unique.  The Ducks’ scoring has been down (2.57 goals/game over these 14 games versus 3.33 over their first 54 games).  Worse, the scoring has been inconsistent. Anaheim has been shut out twice in this span and held to one goal on three other occasions.

One of the problems here has been secondary scoring.  An example is Center Nick Bonino.  For folks who might recognize only the names of Ryan Getzlaf or Corey Perry on the Ducks’ roster, Bonino is currently third on the team in points.  He is not only in the midst of a career year, his fifth in the NHL, but his 17-27-44 scoring line is more than his scoring line over the previous 112 games he played over pieces of four seasons (11-22-33).  However, while he was 16-24-40 in his first 54 games, he is 1-3-4 in 10 games since (he missed four games to a wrist injury).  Bonino has been something of a good luck charm for the Ducks when he is in the lineup, very much less when he is out of the lineup it seems.  Bonino has not recorded a point in three career appearances against the Capitals.

Another thing to consider is the occasional nicks an dents that players endure that make them miss games, if not in large blocks, then often enough to affect their momentum.  For that, there is former Capital Mathieu Perreault.  Obtained from the Caps just before the start of the season, Perreault got out of the gate fast with his new team.  He was 4-5-9 in his first nine games with Anaheim and 5-9-14 in his first 16 appearances.  Ah, but as Caps fans know, “Hot Perreault” is often followed by “Cold Perreault.”  He followed his 16-game start with a seven-game streak without a point and only an assist over a 12-game stretch.  More recently his problem has been intermittent absences from the lineup due to injury.  He missed four games in December to a lower-body injury, another in January to the same problem, and four more in March to an arm injury.  In all, Perreault has missed 11 of the last 38 games, over which he is 8-9-17. He has been solid when in the lineup, but the trick has been keeping him there.  On the other hand, Anaheim is 8-1-2 in those 11 games Perreault missed. 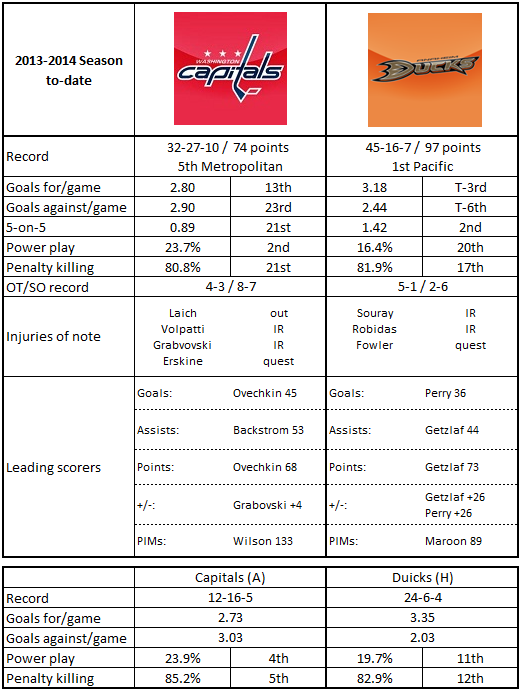 1.  March means “Mischief.”  At least if you are Patrick Maroon.  Young Mr. Maroon, a 6th round draft pick of the Philadelphia Flyers in 2007 (of course), is tied for fifth in the NHL in fighting majors.  However, as they say in Billboard Magazine, “fifth with a bullet.”  Maroon has 89 penalty minutes in 48 games this season, but since March 1st he has three fighting majors and 27 minutes in penalties.  He is not totally without skill within the rules, seeing as he is 6-11-17 with two game-winning goals this season.

2.  If “Carlzner” is a thing in Washington, then perhaps “Pertzlaf” is a thing in Anaheim.  No pair of teammates has more goals as a pair this season than the 65 that Ryan Getzlaf (29) and Corey Perry (36) have combined for (Alex Ovechkin and pick one: Troy Brouwer or Joel Ward also have 65).  “Carlzner" will be busy.

3.  Anaheim would appear to have left their power play in Chavez Ravine.  The Ducks recorded power plays in three straight games before their contest at Dodger Stadium, but starting with their 3-0 win over the Kings on that night, the Ducks are 3-for-48 on the power play since (6.3 percent), 2-for-33 at home (6.1 percent).  That penalty kill has not been very good, either.  Since their win in Dodger Stadium the Ducks are 42-for-53 on the PK (79.3 percent).

1.  The Caps have done rather well against the Ducks since the 2004-2005 lockout, going 5-2-1, including 3-0-0 in Anaheim.  If history is a guide, this will be a high-scoring game, at least for one team.  In five of the last seven meetings, the winning team scored at least five goals.  In the last two games in Anaheim, the teams battled to 6-4 and 7-6 decisions, the Caps winning both.

2.  The Caps have played passably on defense lately, if outcomes are your thing.  Since dropping a home-and-home to the Philadelphia Flyers and allowing 11 goals in the process, the Caps have allowed 15 goals in six games and did not allow more than three in any of them.  Considering this included games against the likes of Boston, Pittsburgh (twice), and Toronto (a high-scoring team), it was not bad.

3.  Over the same six games, though, the Caps scored only 13 goals and were shut out twice.  Only eight of those goals were scored at even strength.  Probably an important factor in the Caps going only 3-3-0 in those six games.

5.  Not sure what to make of this, whether an anomaly or the Caps coming out of a funk.  Starting with their 6-4 loss to the Flyers on March 5th, the Caps went four of five games without scoring a goalin a 5-on-5 close score situation.  In their last two games, wins over Vancouver and Toronto, the Caps shooting 19.1 percent in those situations (4-for-21).

Ryan Getzlaf and Corey Perry are the heavy airframes, the jumbos who can use their size and strength to create and finish opportunities.  On the other hand there is Andrew Cogliano.  Not blessed with great size, he does have uncommon speed.  Perhaps nowhere is that talent more evident than in his being able to score shorthanded.  Cogliano has five shorthanded goals over the past two seasons.  Only Boston’s Brad Marchand has more (six).  The Capitals’ power play no doubt will be an important piece in this game, but fumble the puck, and Cogliano can make them pay at the other end.  He is 2-1-3 in six career games against the Caps.  Neither of the goals were shorthanded.

When Alex Ovechkin returned from the Sochi Olympics, fans might have been concerned that the disappointment of not medaling in his home country would carry over to his performance with the Caps.  When Ovechkin went 4-3-7 in his first four games back, fans might have been relieved.  Not so fast.  In his last six games Ovechkin is 1-0-1, minus-8, and his minus-31 is 847th of 848 skaters in the league.  He is without an even-strength point since he had an even-strength goal and assist against Florida on February 27th, making it 11 straight games without an even-strength point.  He is a “minus” player in his last nine straight games (minus-14 overall).  Needless to say, if the Caps are to make a push in these last four weeks of the season, Ovechkin is going to have to raise his game, especially at even strength.

1.  Even-Even.  Anaheim has the second best ratio of goals scored to goals allowed at 5-on-5 in the league.  They do not seem to do it with possession, though.  The Ducks rank just 17th in Corsi-for percentage at 5-on-5 (49.9 percent)  and just 15th in Fenwick-for percentage (50.3 percent).  If the Caps can play the Ducks even at evens and make this a special teams game, their chances improve.

2.  Play 60.  That Anaheim record when trailing after two periods lurks in the background in this game, and given that the Caps have coughed up two-goal leads in the third period in three of their last ten games (to Florida, Philadelphia, and Vancouver), it is a concern.

3.  Captain, My Captain…Not Their Captain.  This could come down to which captain has the better game, Anaheim’s Ryan Getzlaf or Washington’s Alex Ovechkin.  Getzlaf is tied for second in the league in scoring, but while he has six assists over his last eight games, he has not registered a goal.  It is his longest goal drought of the season and longest since late in the 2011-2012 season.  Ovechkin’s difficulties in recent games were chronicled above.  If one of these guys breaks through at the expense of other, his will be the happy team at the end of the night.

The Caps need to do something that has been very difficult for them to do in recent years, win on the west coast.  The notable exception to that rule has been the Caps’ experience in Anaheim.  This being the first of the three-game swing through California, it sets up as nice as one could ask for as a momentum builder.  But lose, and the next two games look that much tougher.

Posted by The Peerless at 9:45 PM No comments: