Washington Capitals: That Was The Week That Was -- Week 15

Week 15 seems like a long time ago, the Washington Capitals having been missed from competition since last Tuesday due to Winter Storm Jonah and the several feet of snow it left that postponed Friday night’s game against the Anaheim Ducks (and, as it turned out, Sunday’s game against the Pittsburgh Penguins).  It was another successful week, nonetheless, another week in the Caps almost uninterrupted winning momentum. 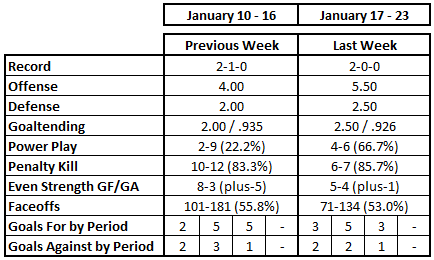 Week 15 was the sixth perfect week out of 15 this season for the Caps.  It was the seventh in which they did not lose a game in regulation.  The Caps finished the week 16 points clear of the New York Rangers in the Metropolitan Division and 14 points ahead of the Florida Panthers in the Eastern Conference.  In defeating two Metropolitan Division rivals in the New York Rangers and the Columbus Blue Jackets, the Caps reached the 11-win mark against divisional opponents.  They finished the week as the only team in the league with double-digit win totals against two different divisions, 16-3-0 against the Atlantic Division and 11-3-1 against the Metropolitan Division. 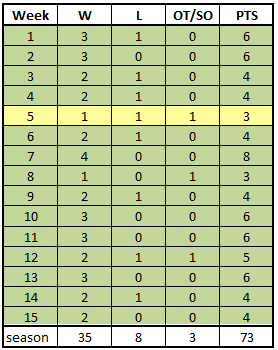 A two-game week is a light week, workload-wise, but an 11-goal week looked a lot like a full week’s worth of output.  With the Caps lighting up the Rangers for five goals and the Blue Jackets for six, the Caps now have 12 games this season in which they scored five or more goals.  They had 13 all of last season (not including Gimmick results).  The Caps lead the league in games with five or more goals scored.

Individually, the scoring was a bit clustered, but that might be more a function of the 11 goals coming over just two games.  There were guys who were hot.  Six Capitals shared the 11 goals, Justin Williams leading the way with three goals, all of them recorded in a hat trick against the Rangers to start the week. Alex Ovechkin, Nicklas Backstrom, and Marcus Johansson each had a pair of goals.  Twelve different Caps recorded points for the week, seven of them with multi-point weeks.  Evgeny Kuznetsov led the team with six points, all of them assists, including four in the 6-3 win over Columbus.  Williams finished the week with five points (3-2-5).

Another week, another week of not allowing more than three goals in a game.  This despite allowing the Rangers 33 shots on goal and the Blue Jackets35 shots on goal.  What looked like a good start to the new calendar year in that regard – opening January with a pair of sub-30 shots against games – has slipped some.  The two games over 30 shots allowed make it five in their last seven in which the Caps have allowed 30 or more shots to opponents.  It was not really much of a score-effect result, either.  The Caps allowed 24 of the Rangers’ 33 shots over the first two periods, after which they held just a 3-2 lead.  They allowed Columbus double-digit shot totals in each of the three periods of the 6-3 win.

If you’re looking at individuals, the Matt Kiskanen/Karl Alzner defensive pair was on ice for three of the five goals against for the week, two of them at 5-on-5, one while shorthanded.  Taylor Chorney and Ryan Stanton were on ice for two goals, both at even strength against Columbus.  Among the forwards, it was Jason Chimera and Tom Wilson on ice for most goals against, with three apiece.

It was not an especially good week, possession-wise.  The Caps were 84 shot attempts to the good, 97 to the bad at 5-on-5, a Corsi-for of 46.4 percent overall.  That was a disappointment after posting a plus-50 percent Corsi-for in each of their previous three games and 55.9 percent overall.  It was not any better in close score situations, where the Caps were 40.7 over the two games (numbers from war-on-ice.com).

As Braden Holtby finished Week 14, so did he start Week 15 – relieved by Philipp Grubauer.  Late in the second period of the Caps 5-2 win over the New York Rangers, Holtby took himself out of the contest with what was later described as symptoms of dehydration.  Grubauer slammed the door in his unplanned stint, stopping all 11 shots he faced in 22 minutes and change of work.

Holtby returned to the ice to face Columbus in the second game of the week, and while he was not quite as sharp as fans have come to expect of him this season, he played well enough to keep the game from ever being in much doubt.  It left him in the unaccustomed position of finishing a week with a personal goals against average over 3.00 (3.07 to be exact) and a sub-.920 save percentage (.912).

“Cool efficiency “ does not describe the Capitals’ power play in Week 15.  “White-hot efficiency” seems a more apt description.  Four power play goals on just six power play chances in two games.  It was quite an eruption for a team that finished Week 14 with their first consecutive games without a power play goal in the 2016 portion of the season.

Three Caps divided up the four goals, Alex Ovechkin recording a pair, and Nicklas Backstrom and Marcus Johansson each recording one.  Evgeny Kuznetsov and Matt Niskanen each finished the week with three power play assists.

It is part of an important change in deployment the Caps have used recently, involving the movement of the forward occupying the goal line extended to the goalie’s left to a position at the top of the crease.  The move appears to have created a headache for defensemen trying to decide whether to cheat and lean toward Ovechkin in the left wing circle, or pay sufficient attention to the man at the top of the crease who is in position to redirect a centering pass, precisely what happened on the power play goals by Johansson against the Rangers and Backstrom against the Blue Jackets.  If you factor in that Ovechkin had the other two power play goals, the Caps seem to have given opponents a whole new scenario to give them fits.

It was not an especially efficient week from a shooting perspective, the Caps managing seven shots on goal in 8:31 of power play time (0.82 shots per minute).  But their shots were of such high-quality that it hardly mattered.  The Caps are still at least a step ahead over their opponents in this regard. 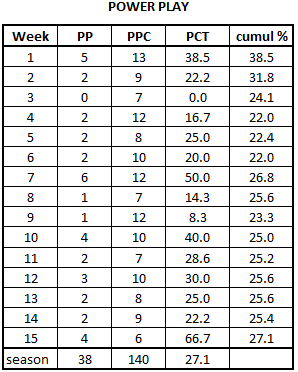 It was a pretty good week for the Caps on the penalty kill, posting a mark over 85 percent after dropping under that threshold in Week 14.  It was a very uneven week, though.  Against the Rangers to open the week the Caps did a fine job a man short, holding the Rangers to four shots on four power plays over 7:40 in power play time.  Against the Blue Jackets, the Caps – Braden Holtby, specifically – found themselves in a shooting gallery.  Columbus recorded ten shots on goal (scoring once) in 4:20 of power play ice time (2.30 shots per minute).  Still, it is results that count, at least in the context of a single week, and one goal in seven chances is a decent result. 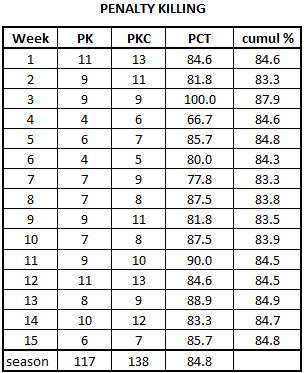 It was a good week overall in the circle for the Caps, divided into a very good start and a less than good finish.  The Caps dominated the Rangers in the opening game of the week, winning 42 of 71 draws (59.2 percent).  They went just 29 for 63 against the Blue Jackets in the second game of the week.  The Caps were consistent across the zones for the week, winning 53.5 percent of their offensive zone draws, 52.0 percent of faceoffs in the defensive end, and winning 53.7 percent of faceoffs taken in neutral ice.

On an individual level, it was the new guy who impressed most.  Mike Richards won 22 of 34 faceoffs (64.7 percent), going over 50 percent in all three zones.  The surprise was Evgeny Kuznetsov being the only other Capital taking at least ten draws to finish the week over 50 percent, going 16 for 29 (55.2 percent). 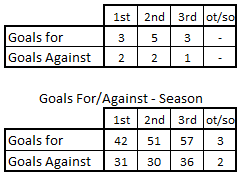 If there was a smudge on the record in Week 15, it was the manner in which the two goals against were scored in the first periods of games.  In both games for the week the Caps allowed the first goal.  The good part of that was that it was the only goal either the Rangers or the Blue Jackets would score in the opening frame.

Will they finish with such an impressive total of standings points?  Who knows?  Injuries, slumps, the odd snow storm could pierce the momentum the Caps established and sustained over the first 46 games of the season, but one reason that they have been able to sustain that momentum is that they show no inclination but to take each game – each week – at a time.  Week 15 was an example of that.

Posted by The Peerless at 1:04 PM No comments: