The Peerless Prognosticator is ON THE AIR!!! -- Caps vs. Predators, October 17th

If it’s Saturday, it must be hockey. And that’s what we have this evening at Verizon Center as the Capitals host the Nashville Predators, owners of a 2-4-0 record thus far, good for 14th in the Western Conference, and…

“What's the matter? The CIA got you pushing too many pencils? Huh? Had enough?”

I don’t work for the CIA, Dutch. You’ve been out hunting too many predators, I think…Speaking of which, the Caps play the Predators tonight. Any advice on how to beat them?

The Preds come into this one having lost four in a row. What do you think the players’ attitude is on the ice right now?

“So you cooked up a schedule like this and dropped the six of us in a meatgrinder?”

They’ve given up six goals in two of their last three games. A team with a reputation for strong defense seems to have gotten off to a rocky start. What can they do to tighten this up? Is it their positioning?

Maybe the Predators should bring you and your boys in to help get things back on track.

“My team works alone, you know that.”

Any advice for fans tonight?

Dutch is right… stick around. This should be an entertaining game. The Caps are 7-5-1 against Nashville since the Predators came into the league in the 1998-1999 season. And the key seems to be this number: “3.” If the Caps hold the Predators to less than that number of goals, they win – 5-0-0 in such games. If the Preds score three or more? The Caps are 2-5-1, and one of those wins came in a Gimmick.

You might note that Jose Theodore – “Three-or-More” to his detractors -- is not likely to play tonight, as he is nursing back spasms. Semyon Varlamov and Braden Holtby will be the netminders dressing for the Caps. We’ll have a bit more to say about that in a bit.

As for the Predators, they do not come about their record by accident. They have struggled in the early going, no more so than on offense, where they have yet to score more than two goals in any game yet played. Although the defense has had those two six-goal games posted to their record, they have allowed more than two goals in only one other game (their last one, a 3-1 loss to Chicago). Here is the tale o' the tape... 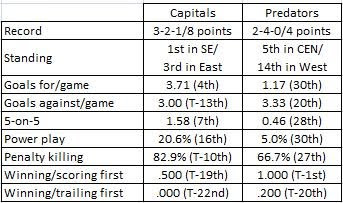 The matching part to this set is that the Predators don’t finish well, either. They have a total of two third period goals in six games, both of those scored in the second game of the year, a 3-2 win against Colorado. They’ve gone 85:12 of third period play without having turned the red light on.

It’s early in the season to say that a team is showing cracks under the pressure to score goals, but Nashville has allowed 15 goals in their last three games (they’ve scored two). Eight of them have come in the first period (four each against Edmonton and Dallas).

It is not as if either goalie has shined above the other for the Predators. Dan Ellis has both wins (2-1-0), but has a 3.15 goals against average and a .885 save percentage. Pekka Rinne has the other three losses for Nashville and a 3.46 GAA and .894 save percentage to go along with them.

It doesn’t get better for the Predators moving out from their net in this respect -- six-year vet Dan Hamhuis, who is third on the blue line in ice time, will not play tonight after suffering an injury in the Chicago game on Thursday. Cody Franson has been recalled from Milwaukee in the AHL to take Hamhuis’ place on the roster. If Franson plays, it will be his NHL debut.

The early sheet paints a dim picture among the individual Predators as far as offensive production goes. Only three forwards have more than one point so far (Jason Arnott: 3-2-5; Patric Hornqvist: 2-3-5; and Steve Sullivan: 1-1-2). Only eight Predators have points at all among 22 skaters who have dressed. Only four have goals (Arnott, Hornqvist, Sullivan, and Martin Erat).

This is a team with talent, though, and taking it lightly can – and will – bite a team in the backside. Arnott has ten consecutive 20-plus goal scoring seasons, including 33 last year. Ryan Suter is a talented defenseman who 29 other teams would love to pry away from Nashville. Shea Weber, ditto, and then some. Steve Sullivan missed 58 games of the 2003-2004 season, but since then has had a 30-plus goal season and at least 60 points in two of the last three years (he missed 41 games in 2008-2009, yet still had 32 points). Martin Erat has been a 50-point player in the last three seasons. J.P. Dumont has had at least 65 points in the last three seasons.

There is talent here that the Caps would be advised not to allow to wake up from their early autumn slumber.

And that brings us to the goaltenders for the home team. The soft underbelly of the Caps is exposed here, which is not generally what you’d want to expose to a club that has a buck-toothed sabre-tooth tiger as a logo. Semyon Varlamov and Braden Holtby are goaltenders of considerable promise. Varlamov has yet to lose a regular season game in regulation in the NHL; Holtby has allowed a total of three goals in his first three games as a professional, at Hershey. That doesn’t make either a solid, battle tested goalie at this level. Leaving aside the issues that follow veteran Jose Theodore, it is the problem the Caps have in terms of mismatched development arcs that could haunt them this season. The forwards for the Caps are as good as any team in the league with NHL aspirations. The defense, while lacking a true number one stopper, is probably good enough for a deep playoff run, if not a Stanley Cup championship. The goalies? Well, Varlamov and Holtby will come into this game with a total of 52 games as professionals – NHL and AHL – and Varlamov has 49 of those (including 13 playoff games). Combined, the two have nine games of NHL regular season experience, all by Varlamov.

But the issue at hand is tonight, and it won’t take a rocket scientist to figure out what to look for. If the Caps can keep the Predators off the score sheet early – the Preds have scored one first period goal, the Caps have allowed only two – this could be an early evening. If the Predators get a spark in the first, it could be a bad sign.

Even though on paper, this is the game Varlamov was almost certainly going to get to start in anyway, it is something of a dangerous game for him and the Caps. But the Caps showed on Thursday that they are capable of the simple meat-and-potatoes kind of effort that can strangle the life out of a team. And, they have the skill to get their opponents running around and drawing penalties (five minors in the first period by the Sharks on Thursday). That sounds like a plan, right Dutch?

“You fall behind, and you're on your own.”

Posted by The Peerless at 10:25 AM No comments: