Not the best idea these guys have had 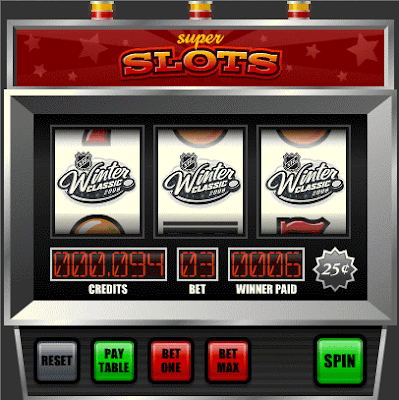 "This is really kind of becoming a destination event for hockey fans, but also sports fans. We want to open it up to the masses."

That was a statement offered to the press as the NHL revealed that it is considering a number of, shall we say... "untraditional" venues for the annual Winter Classic, among them: Los Angeles (Rose Bowl), Las Vegas, and even our own Washington, D.C. (average January high temperature, 42 degrees Fahrenheit).
It is the NHL's thought that cities should compete for the Classic just as Super Bowl cities do.
Hey, you know what? I'll bet Lambeau Field would like to host a Super Bowl. But it doesn't and won't ever do so. Why? Well, you could argue that sponsors won't want to go to a small town in Wisconsin (not a lot to do compared to, say, Miami), but it's also that it's freakin' cold outside! The weather doesn't work. The only times the NFL has decided to hold Super Bowls in northern cities, it did so in domed stadiums, and it hasn't become a habit (three games in 42 years). Cities might compete for Super Bowls, but almost always those that win are cities where snow shovels aren't sold in hardware stores.
In case the folks at NHL headquarters have forgotten, hockey is generally played on ice. And there being enough complaints in some cities (certainly in...Washington) that the arena in which their hockey team plays is too warm, too often to provide a decent ice sheet, one doesn't think that a game... outdoors... in Las Vegas (average January high temperature 55 degrees Fahrenheit) is going to make for a better stage, whatever the state of the art of ice-making equipment.
And, the visuals would make for some neck-snapping head-shaking...players on the ice, fans in the stands potentially in sun glasses and shirt sleeves (remember, that 55 degrees is an average high temperature in Vegas in January). We'd wonder if Ryan Zimmerman was in the on-deck circle waiting to take a shift to replace Alex Ovechkin.
The fact that the NHL wants to open up this game to "the masses" (but only in the United States, apparently) aside, one of the charms of this event is it recalls days of youth gone by, but not forgotten, playing pond hockey. We're thinking there hasn't been a lot of pond hockey played in the Nevada desert over the years, or Southern California. And even though being a Caps fan, there is more of a little self-interested desire to see such an event here, we're doubting this is even much of a great idea for D.C. This might be the most powerful city on earth...it isn't the coldest.
This sun-belt experimentation with the sport has had something of an uneven success (to be charitable about it). Hockey is a cold-weather sport, and this event has added something of a winter charm to the television appeal of the sport. If you're going to play it outdoors, then do it justice. We already have one Gimmick in the NHL; let's not have another.

It's a "winter" classic, after all.

Geez, even a non-sports columnist sees a winner

Marc Fisher, metro columnist of the Washington Post, on describing the neighborhood into which the Obama's are about to move...

"The District is young, multiracial, brainy (even the cabbies are public radio listeners), a place where wine (No. 1 in the nation in per capita consumption) beats beer (we're middle of the pack). Like Chicagoans, we love politics and sports, though our local franchises, with the curious exception of the hockey team, have long been infected with an incurable virus that wipes out the gene for winning games. Not to worry -- we don't think it's contagious."

We're hoping it's not contagious, anyway. Now, if he could only be convinced to come to a hockey game...

Posted by The Peerless at 11:28 AM No comments:

A Tale of Two Cities

Sometimes, you can just see it in a player -- or a coach's -- face as to how things are going and how they're responding to adversity. Consider the two clips here and a couple of teams that have had some recent adversity. One coach responds matter-of-factly and later with a bit of a snarl after a loss (a bad one, at home) earlier in the week, the other looking like someone searching for something and not finding it after also losing at home, this time last night...


Posted by The Peerless at 9:42 AM No comments:

Keep the Penguins from getting any momentum…With the 87th consecutive sellout at Mellon Arena barely settled in for a night of hockey (how’s that for irony), the Penguins had two excellent chances before the game was 90 seconds sold. Chris Minard missed on his chance on the game’s first shift, and Jose Theodore stoned Sidney Crosby on a breakaway moments later. If the Penguins score on either of those opportunities, we’re writing about an entirely different subject this morning. No momentum…check.

Stay out of the box – but if you don’t, work it off and keep it close. It would be hard to overstate how important killing a full two-minute five-on-three imbedded in a double minor penalty to Donald Brashear was early in that first period. There was an opportunity for a three-fer for the Penguins, and the Caps killed the 5-on-3 portion. Even with Evgeni Malkin scoring on the last part of the extended power play, there was a “what if” air about the whole episode. The Penguins alluded to it – and the missed breakaways – later when coach (for now) Michel Therrien said, "We could have had a two- or three-goal lead.” They had one, keeping it close…check.

Play with passion, not emotion. Much was made of the feud between Alex Ovechkin and Evgeni Malkin and the comments by Alexander Semin toward Sidney Crosby. It could have made for the sort of emotional night that causes one to stray from the business at hand. Ovechkin played with his signature passion – two goals, an assist, 15 shot attempts, three hits (all within the context of the game, not products of straying on a run at a Penguin). Semin had a goal and ten shot attempts. Meanwhile, Malkin was much more subdued after his goal and some hijinks of his own late in the first period, Crosby was injured, apparently first when he was tangled up with Viktor Kozlov in the first, but again certainly when colliding with David Steckel late in the third – he left the game at that point. Passion, not emotion…check.

Get some secondary scoring. Ovechkin getting points is more or less a given. Semin had failed to register a point in only four of 26 games played in this season. Both had points (Ovechkin: 2-1-3; Semin: 1-0-1). The problem from time to time has been in getting reliable secondary scoring. Well, maybe Tomas Fleischmann is becoming that dependable sidekick. He had the game-winner in the third period, batting in a rebound of an Ovechkin shot while falling to the ice. Take note of from where he scored – in deep between the hash marks (didn’t see that in the Edmonton game, did we?). It was his third consecutive game with a goal and fourth in five games. Secondary scoring…Czech!

Finish strong. The Caps came into the game third in the league in third period goals scored. They finished the game second in the league. Getting four – three of them in the last 12 minutes – does that. And the Caps did not play prevent defense after getting a lead. They put nine shots on goal in the 11:49 after Flesichmann gave them the lead (two of them resulting in goals, including a shorthanded empty netter by Jeff Schultz). Another of the problems that creeps into the Caps’ game from time to time is an inability or unwillingness to stand on an opponent’s throat when they’re down. Not tonight. Finish strong…check.

Rule 101.3(a) – “In all games played in Mellon Arena in which the Pittsburgh Penguins are a team playing in the contest, Sidney Crosby shall be deemed one of the game’s three stars.” OK, so let’s see. His team was beaten by three goals… he had a nice assist on the Malkin goal (finding him in the high slot from behind the goal line), his other assist was – gadzooks! – a cross-ice pass at the top of the zone (a SportsCenter top-ten pick, no doubt), he won a lot of faceoffs. He was also on the ice for three of the Caps’ even strength goals. Does he get points for playing a lot of the game perhaps injured? Yes, he does. But if I had to give a star to a Penguin, it would have been to Miroslav Satan (that’s damning with faint praise…you’d have to stretch the meaning of the term to say any Penguin had a “good” game, let alone a “star” game). We’re betting Nicklas Backstrom gladly trades that third star for the three additional assists he piled up (even if he did lost all five draws he took against Crosby). Sid…third star… check.

Win the special teams contest. We touched on the five-on-three, but killing off the three power plays that followed the goal the Penguins managed on the power play was important, especially the two kills the Capitals achieved in the third period – one coming shortly after the Whitney goal to tie the game, the other coming when the Caps held the most dangerous lead in hockey (a two goal lead). The result was that the Caps won the game-within-a-game, 3-1 (two PP, one SH) Win the special teams contest…check.

Check. Finish your checks, pay a price to make a play. Pittsburgh won the hits comparison, 24-17. But in those 17 hits for the Caps were some guys who don’t normally show up on the score sheet in that column – Sergei Fedorov had a couple (he only had six in 18 games before last night’s contest), as did Mike Green (26 in 31 games). Even Nicklas Backstrom and Karl Alzner chipped in. Check…check.

In the end, it’s just one more game and two more points in an 82-game season. It is probably especially satisfying for Caps fans for the team to go into Pittsburgh – for the third straight time – and eat the Penguins’ herring. We’re betting the players would admit to no small level of satisfaction, too. But with Boston looming on the weekend, there isn’t a lot of time to savor seafood.

Even so, great job, boys.

Posted by The Peerless at 7:03 AM No comments: