The Peerless Prognosticator is ON THE AIR!!! -- Caps vs. Panthers, November 15th

The Peerless Prognosticator is ON THE… 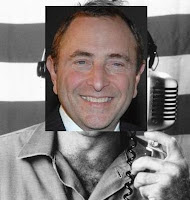 Geez…Bettman and his new radio gig…

Hey, this is not a test…This is dump and chase. I’ll take a dump while you chase down breakfast!!...Time to rock it from to NYC!...Is that me, or does that sound like an Elvis Presley movie?...Viva …Oh, viva-a-a-a-a, … me, me, why don't they get a puck and cork me?

Hey, is it a little too early for being that loud? Hey, too late. It's…oh-six-hundred…What's the "O" stand for? Oh, my God, it's early…Speaking of early, how about that goon, Marty Dreiwitz?...I was wondering what you’ve been doing since the war…Thank you, Marty, for that "silky-smooth sound." Makes me sound like Doc Emrick.

Picture a man going on a journey beyond sight and sound. He's left his cushy office. He's entered the neutral zone. What is a neutral zone? Sounds like something out of The Wizard of Oz…Oh, no, don't go in there. Oh-we-oh…Go Leafs Go…Oh, look, you've landed in . You're among the little people now…We represent the crummy Southeast, the crummy Southeast…Oh, no! Follow the …follow the …"Oh, I'll get you, my pretty!" Oh, my God. It's the wicked witch of the north…It's Scotty Bowman!...

Scotty, you old fart. You've been behind every bench except Johnny Bench. Stop it right now.

Doug E….where are you calling from?

Well, thank you, Doug E. What's the weather like out there?

"It's cold. Damn cold!...Real cold!...Coldest things is my shorts. I could freeze things in it….a little crotchloo cooler."

Well, can you tell me what it feels like?

"Fool, it's cold! I told you again!...Were you born in ? It's damn cold!... It's so damn cold, I saw little guys, their little skates just freeze to the pond…It's that cold! Do you know what I'm talking about?"

What do you think it's going to be like tonight?

"It's gonna be cold and dark!...That sucks if you're with a lady, but it’s even worse if you're outside."

Thank you, Doug E….Here's a song coming your way right now…"Cold as Ice" by Foreigner…Yes! Hey, you know what I mean!

As for the Caps, they get to renew acquaintances with the Florida Panthers, who while no one was looking – and judging from their attendance (28th in the league), no one has been – have amassed a record just about as forlorn as the Caps…7-11-1. The Cats are 3-6-1 in their last ten and have been pretty grim against Southeast teams in that stretch, going 2-4-1.

The Panthers suffer a similar difficulty as do the Caps these days…Scoring: 2.47 goals-per-game/24th in the league (versus 2.35/26th for the Caps). But the similarity ends there. is next to last in the league in 5-on-5 efficiency ( ranks 15th in that measure). However, the Panthers do sport an effective power play (22.1 percent/7th) and a decent, if unspectacular penalty killing unit (82.1 percent/13th). In both respects the Panthers outrank the Caps. It’s an old refrain, but if the Caps can stay out of the box…

The guys you thought might lead in scoring are doing just that – Olli Jokinen (9-11-20), Nathan Horton (6-8-14), and Stephen Weiss (2-10-12) top the list. But who is Cory Murphy? Well, he’s a 29-year old first-year player who has spent the last six seasons in Europe, primarily . He’s also 1-10-11. He's also got an injured shoulder and is doubtful for this game. Meanwhile, our erstwhile friend, Richard Zednik -- coming off a bout with the flu-- leads the team in game-winning goals….two! (that would lead the Caps, too)

One would have to think that the Panthers will start Tomas Vokoun in goal, this being a division game and Vokoun having played well (1.82, .942), albeit with bad-luck results (2-3-0) in his career against the Caps.

The simple fact is, struggles mightily at even-strength. They have only five players on the plus side of the ledger this year, and only one better than +1. They have six players (including Jokinen) at -6 or worse.

Thank you for that lovely prognostication. That funky stuff will drive us ‘til the dawn. Let's go. Let's boogaloo till we puke.