The Peerless Prognosticator is ON THE AIR!!! -- Game 80: Capitals at Panthers, April 1st

The Washington Capitals wrap up the road portion of their regular season schedule on Monday night when they visit the Florida Panthers at BB&T Center in Sunrise, Florida.  The Caps carry a four-game winning streak into this game, outscoring opponents, 16-7.  A win in this game would give the Caps 25 road wins for the season, second-most in team history, trailing only the 2015-2016 club that had 27 road wins.

Florida returns home after a four-game road trip, losing the first two game against Toronto and Montreal before coming back to earn the split with wins over Ottawa and Boston.  Those wins are little consolation for a club that will miss the postseason for the third consecutive year and that has reached the playoffs only twice in the last 18 seasons.

Scoring has not been a problem for the Panthers, who go into the week ranked ninth in the league in scoring offense.  Only the Chicago Blackhawks have a higher ranked scoring offense among non-playoff qualifiers (3.24/eighth).  It is an offense led by Mike Hoffman with 35 goals.  Now in his eighth NHL season, the 29-year old is having a career season in goal scoring, the 35 goals marking his first season topping the 30-goal mark after four consecutive 20-plus goal seasons.  His 34 assists are within one of a personal best, set in 2016-2017, and his 69 total points is a career high.

Unfortunately, and perhaps appropriate in the context of the Panthers’ season, Hoffman's minus-25 rating is a career worst.  Hoffman has had a bit of a struggle scoring of late, going without a point in his last three games, his first three-game streak without a point since he was blanked over three games in late January and early February.  Hoffman gives the Panthers a chance, but even his scoring has not been enough to move the needle far enough to make this a successful season.  Florida is 18-9-6 in the 33 games in which he has goals this season.  In 13 career games against Washington, he is 4-4-8, minus-5.

Despite having played for four teams in the NHL over a 13-year career, defensemen Keith Yandle has been a producer on offense.  This has been a career year for Yandle who hit 50 assists and 60 points for the first time in his career (9-51-60).  He has had at least 40 points in each of the last nine full seasons, not counting the shortened 2012-2013 season, and including that shortened season has not missed a game since the 2008-2008 season.  With a goal in any of his last three games this season he would hit double digits for the first time since he had 10 goals in the 48-game 2012-2013 season.

That goal has been a long time coming, though.  Yandle has been stuck on nine goals for 19 games, although he does have 13 assists over that span.  It has been a record-setting year in other respects, for Yandle, though.  The 60 points he has is a franchise record, breaking the previous record of 57 points by Robert Svehla in 1995-1996.  He also has 38 power play points, a record for any skater in team history, one more than Olli Jokinen posted for the club in 2005-2006.  Yandle is 2-14-16, minus-1, in 24 career games against the Caps.

A team not making a visit to the postseason has a chance to look at young players, and the Panthers have taken a look at many this season.  Nine rookie skaters have dressed for the team, none for more games than Henrik Borgström.  A first round pick in the 2016 entry draft (23rd overall), the native of Finland has appeared in 47 games to date.

Despite having dressed for fewer than two-thirds of the team’s games this season, he is tied for seventh in goals among current forwards (eight) and is eighth in points among that group (17).  On the other hand, he also happens to be a minus-15, second worst among forwards.  The odd part of his scoring this season is that he has goals in seven games, but in only one of them did the Panthers win, a 4-3 Gimmick win on New Year’s Eve in Detroit against the Red Wings.  Assists are a different story.  Florida is 6-2-1 in the nine games in which he has helpers this season.  This will be Borgström’s first appearance against the Capitals. 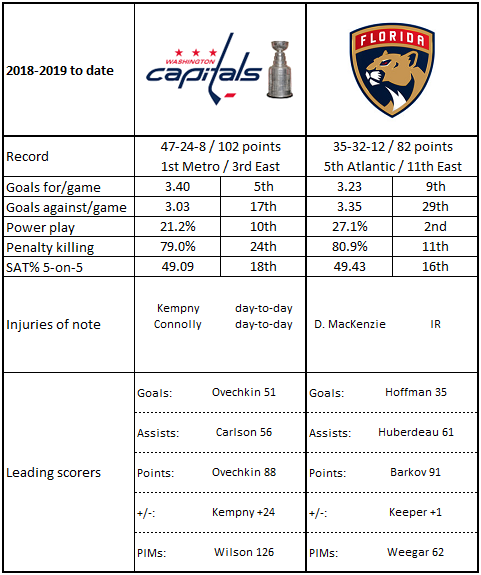 1.  Florida has been charged with more giveaways than any team in the league (1,169).

2.  The Panthers do not handle good fortune well.  Their 13 wins when leading after one period is fewer than any club in the league except for Los Angeles (12) and the New York Rangers (10).  Their .464 winning percentage in such situations (13-7-8) is worst in the league.

3.  Florida does not handle close games well, either.  Their 14-12-12 record in such games gives them a winning percentage of .368, fourth-worst in the league.

4.  That both of the previous games in this year’s season series went to extra time is not surprising.  The Panthers have played 22 extra time contests this season and are 12-10 in them.  Only Vancouver has played in more such games (23 to a 13-10 record).

5.  Florida is the only team in the league to have allowed 100 goals in the third periods of games this season.

1.  The Capitals have scored 86 first period goals this season.  In the Eastern Conference, only Tampa Bay has scored more (100).

2.  Washington can be scattershot at times.  Their 1,042 missed shots are the fourth-most in the league.

3.  Only Columbus and Tampa Bay have more wins when leading after one period (28 and 31, respectively) than the Capitals (27).  On the other hand, only Detroit has more losses in regulation (nine) than the Caps (seven, tied with four other clubs, including Florida).

4.  Second periods are similar.  The Caps have 36 wins when leading after two periods, second only to Tampa Bay (37).  But they also have three losses in regulation in such games, and only three teams have more – Ottawa (four), Winnipeg (five), and Florida (six).

5.  The Caps have lost only seven games this season in regulation when outshooting the opponent, fewest in the league.

For goalie Roberto Luongo, the end of his NHL career might be at hand.  After 19 seasons with three clubs and 1,042 games, second-most to Martin Brodeur’s 1,266 games, he is about to turn 40 years old (April 4th).  His retirement would leave a hole in the Panther lineup, one that the club hopes that Sam Montembeault can fill, if James Reimer, Luongo’s principal backup this season and signed through the 2020-2021 season cannot.  Montembeault was the sixth goalie taken in the 2015 draft (the Caps took Ilya Samsonov as the first goalie in that draft), selected by the Panthers in the third round as the 77th overall pick.  He spent two more seasons in the QMJHL in Canadian junior, and then off to Springfield in the AHL, where he spent last season and started this season.  He was called up to the Panthers in late February and made his NHL debut on March 2nd, making 22 saves in a 4-3 overtime loss to Carolina.  He then went on to win his next four decisions, stopping 94 of 102 shots in the process (.922 save percentage).  However, he dropped his last three decisions and has no-decisions in two other games (both Panther losses), giving up 17 goals on 118 shots in the five appearances (.856 save percentage).  If he gets the nod, it would be his first appearance against Washington.

It has been an interesting year for the Hero of Game 5.  Lars Eller will forever be remembered as the player who scored the game-winning, series-clinching, Cup-winning goal for the Caps in Game 5 of last spring’s Stanley Cup final against the Vegas Golden Knights.  This season, it has been a matter of returning to toil in relative obscurity, a third (sometimes second) line center who is relied upon to provide solid, steady two-way play.  He has shot in a bit of bad luck this season, recording 12 goals on 157 shots (7.6 percent shooting, a career low) after posting a career-high 18 goals on 161 shots last season (11.2 percent).  He does have a career-high 23 assists, though, and his 35 points are within striking range of his career-high of 38 points set last season.  More Eller has been a good thing for the Caps, who are 8-1-0 in the nine games in which he skated more than 19 minutes this season, although in an odd turn, the Caps are also 9-2-1 in the 12 games in which he logged less than 15 minutes.  Eller is 5-11-16, plus-6, in 30 career games against Florida.

The Panthers have been an annoying, prickly, bothersome thorn in the Caps’ sides for a few years now.  Even if they are out of contention for a playoff spot and are looking hard at players who can contribute down the road, do not expect that to change.  The Caps started the road portion of their season with a pair of losses.  It would be nice to go out with four straight wins.

Posted by The Peerless at 1:22 AM No comments: