The Peerless Prognosticator is ON THE AIR!!! -- Game 7: Maple Leafs at Capitals, October 17th

After taking two days to lick their wounds after being throttled by the Philadelphia Flyers, 8-2, on Saturday night, the Washington Capitals return to the familiar ice sheet at Capital One Arena on Tuesday to host the Toronto Maple Leafs, the squad they defeated in six games in last spring’s first round playoff series.

This will be only the third home game of the young season for the Caps, the club having split their first two decisions, a 6-1 win over the Montreal Canadiens and a 3-2 loss to the Pittsburgh Penguins.  The Maple Leafs are coming off a 4-3 overtime win over the Montreal Canadiens on Saturday night.  Their visit to Washington will be their first visit to the American side of the border this season.

Toronto brings a still young roster to Washington, and the three youngest players on that roster might be their three most promising skaters.  Autson Matthews (20), Mitch Marner (20), and William Nylander (21) might be the future of the franchise, but they are a large part of the present.  Matthews, the first overall pick in the 2016 entry draft, brings a five-game points streak to open the season in to this contest.  That streak extends to nine games, counting the last four games of the Leafs’ opening round series with the Caps last spring.  Whereas last season he started with a band – a four-goal game in his NHL debut – he has been consistent in his goal scoring so far, recording a total of five goals in five games and held without a goal just once.  Matthews, who last season became just the 16th player in NHL history to record at least 40 goals in his rookie season (he finished atop the rookie class with 69 points), and first since Alex Ovechkin did it (54 goals) in his 2005-2006 rookie year, shows little sign of slowing down, although his 29.4 percent shooting percentage is unlikely to be sustainable.  He is 1-2-3, even, in three career games against the Caps.

Marner and Nylander might have been caught up in Matthews’ wake as rookies last season, but they each had 61 points, finishing tied for third in rookie scoring last season (Winnipeg’s Patrik Laine was second with 64 points) and finishing fifth and sixth, respectively, in the voting for the Calder Trophy as the league’s top rookie (won by Matthews).  They have had productive starts, Nylander with five points (1-4-5) and Marner with four (1-3-4), and each have a pair of power play points.  There the similarities so far this season end, though.  Nylander is a team-best plus-8 (tied with Nikita Zaitsev), while Marner is a team-worst minus-6.  Nylander has points in four of five games so far, and Marner has points in his last two outings, making this a formidable trio the Caps will face.  Nylander is 0-1-1, minus-3, in three career games against the Caps, while Marner is 2-3-5, minus-2, in three career contests against Washington.

Being a run-and-gun sort of team, the Maple Leafs leading the league in scoring offense (5.20 goals per game) is not surprising.  Neither is the flip side of that, their 3.80 goals allowed per game being third-worst in the league.  It has made for a difficult start of the season for Frederik Andersen, who has played every minute in goal for Toronto so far.  Only six of 58 goalies to dress so far this season have faced more shots than Andersen (158), and his goals against average (3.76) ranks 46th in that group, while his save percentage (.880) ranks 47th.  Like Capital goaltenders so far, the barrage has been more or less constant, his having faced more than 30 shots in four of the five games in which he appeared so far.  In two career appearances against the Caps, he is 1-0-1, 4.00, .875. 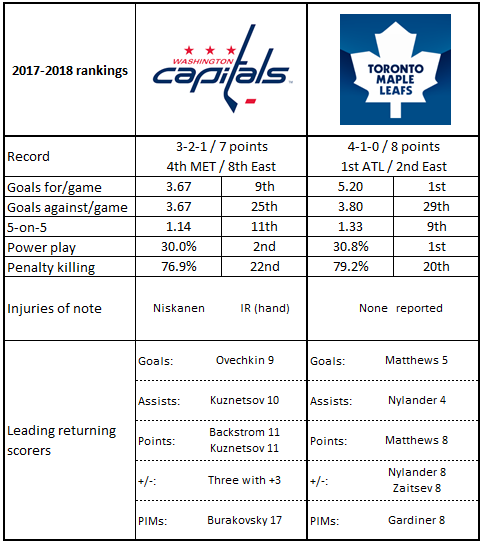 1.  Toronto already has 13 different skaters with goals, more than half the total they had all of last season (24).  Of the 20 skaters to dress for the club so far, only former Capital Eric Fehr is without a point.

3.  Protecting the puck has been something of a casualty of the Leafs’ high-octane style.  Only four teams have been charged with more giveaways than Toronto (65), and their ratio of takeaways-to-giveaways (0.58) is poor.

5.  The Maple Leafs lean heavily on one defensive pair in killing penalties. Ron Hainsey (6:32) and Nikita Zaitsev (5:35) are one-two in the league in shorthanded ice time per game among defensemen.

1.  The eight goals the Caps gave up to the Flyers on Saturday night was the sixth time since the 2004-2005 lockout that they allowed eight goals (they have not allowed more in any game over that span).  Every instance was on the road, and four of them were against teams from Pennsylvania, both Philadelphia and Pittsburgh applying the suffering twice.

3.  The Capitals will provide an interesting foil for the Maple Leafs in one respect.  While Toronto is first in first-period goals scored (12), the Caps are ranked third with nine of their own first period markers.

Patrick Marleau has been a “left coaster” of sorts all his life.  Born in Aneroid, Saskatchewan; he played amateur hockey for the Swift Current (Saskatchewan) Legionnaires and the Seattle Thunderbirds; and then he spent 19 seasons with the San Jose Sharks.  Now, he is spending the latter part of his NHL career as the troop leader, in a manner of speaking, to a young and precocious Maple Leaf squad.  Marleau has a fine body of work, having passed the 500-goal mark in his career last season with the Sharks and finishing last season with 1,082 career points, one of 86 players in league history to top the 1,000 point mark.  But one amazing aspect of his game is his incredible durability.  In 19 seasons before this, Marleau missed a total of 31 games and never more than eight in any one season, that one being his rookie year in 1997-1998 with the Sharks.  He has dressed for every regular season game in each of the last eight seasons, a streak he is adding to with the Maple Leafs this season.  Marleau is 9-13-22, plus-5, in 27 career games against the Capitals.

When folks talk about sustainability, they usually speak in terms of a player’s ability to keep a run of goal scoring going or maintaining a shooting percentage above a certain level or keeping a streak of points going.  Lars Eller presents a bit of a different look in terms of sustainability.  In eight seasons before this one, Eller never posted a faceoff winning percentage over 53.2 percent and had a career winning percentage of 49.2.  However, this year he has been beastly in the circle, winning 61.7 percent of his 81 draws, seventh in the league among 86 players taking 50 or more draws.  But what has not changed from last season is a dry hole in goal scoring.  Eller had one goal in his first ten games last season and two in his first 29 contests; he has none in six games so far this season.  His third line center duties would, conventionally speaking, tilt more toward defensive responsibilities and being an effective possession player.  He has been that for the Caps.  But the team also needs some more bottom-six production than it is getting, and Eller needs to be a part of that.  In 32 career games against Toronto, he is 7-10-17, plus-3, the 17 points being the most he has against any team in the league. Whether he plays or not is an open question as he was reported to be ill this morning and not certain of being able to go on Tuesday.

The Maple Leafs look a lot like the 2009-2010 Caps – young, fun to watch, not terribly concerned with the dull stuff like “responsibility in their own end.”  There might be teams that can skate with them, but few if any can outskate them.  And the depth of their offense might be unmatched.  This is precisely the sort of team that would give the Caps fits if Washington iced a healthy group.  But with Matt Niskanen – arguably their best defensemen – out for the foreseeable future, the Caps are going to have their hands full trying to contain this group.  If ever there was a need for “system” to trump “skill,” this will be it.  These teams seem likely to trade chances all night in what might be the highest total scoring game of the season the Caps will play.