The Peerless Prognosticator is ON THE AIR!!! -- Game 39: Capitals at Blues, January 3rd

The Washington Capitals begin the 2019 portion of their regular season schedule on Thursday, when they visit the St. Louis Blues at Enterprise Center.  The Caps had a four-game winning streak snapped in a 6-3 loss to the Nashville Predators on New Year’s Even in their last contest, while the Blues will be looking to stop a two-game losing streak that has left them at the bottom of the Western Conference standings.

The Blues have already made one coaching change this season, relieving Mike Yeo after a 7-9-3 start in favor of former Capital Craig Berube.  He has hardly fared better, leading the Blues to a 8-9-1 record since taking over as head coach.

There is no secret to why the Blues are where they are in the standings.  Then can neither score (2.76 goals per game/25th in the league in scoring offense), nor can they keep opponents from scoring (3.30 goals per game allowed/fifth-worst in the league).  On offense, St. Louis has had 21 of their 28 skaters dressing so far this season record at least one goal, but only seven of them have more than five goals.  That group is led by Ryan O’Reilly, who has 15 goals in 37 games to date.  It is an odd position in which O’Reilly finds himself in more than one way.  On the one hand, he has been primarily a playmaker over his ten year career.  He has had at least 35 assists in each of the last five seasons entering this one, and with 20 assists in 37 games appears on a pace to challenge that threshold once more.

What he has not been is a top-tier goal scorer.  Only once in nine seasons entering this one did he top 25 goals (28 in 2013-2014 with the Colorado Avalanche.  He is on a pace to do so for a second time, but it is not his usual offensive profile.  It says more about the Blues’ deficiencies on offense in other areas that he leads this team in goals, a point driven home by his still leading the club in that area despite recording only three goals in his last 15 games.  Another way in which O’Reilly is in an odd position is that he is in the third year of a seven-year/$52.5 million deal he signed while a member of the Buffalo Sabres.  He will not be 28 years old until next month, and St. Louis mortgaged a lot to get him last July,  but who is untouchable on a roster performing in such a disappointing fashion?  Washington is one of two teams against which O’Reilly has not scored a goal in his career (Vancouver is the other), going 0-5-5, minus-2, in 16 career games against the Caps.

As meager as the Blues’ offense is, it is a bit surprising that they get as much as they do from defensemen.  Seven defensemen to dress this season have at least one goal, eight of them have points, and three of them have 10 or more points.  What is surprising here is that it is Vince Dunn who leads St. Louis defensemen in points overall (3-13-16).  Dunn, who was taken one spot ahead of Caps defenseman Jonas Siegenthaler in the 2015 entry draft, had a fine rookie season with St. Louis last year, tied for fifth among rookie defensemen in goals (five, with New Jersey’s Will Butcher) and sixth in that group in points (24).  With three goals and 16 points in 35 games so far this season, he is on a pace to improve on his rookie numbers... perhaps, at least as far as goal scoring is concerned.  The odd part of his numbers so far this season is that while he started the season with his three goals in his first six games, he is without a goal over his last 29 games (0-12-12).  Dunn is 0-0-0, minus-3 in one appearance against the Caps.

Goaltending has been, to be charitable, unsettled for the Blues this season.  St. Louis is still waiting on Jake Allen to be “the guy,” despite the fact that his save percentages have dropped in each of the last three seasons after he posted a career best .920 in 2015-2016.  He slipped to .915 the following season, then to .906 last season.  He is at .900 in 31 appearances so far this season.  Chad Johnson ended up not being the answer as the backup, either, let alone a challenger to Allen.  After going 2-6-0., 3.55, .884 in ten appearances with the Blues, he was waived and claimed by the Anaheim Ducks.  That left Jordan Binnington, a third-round pick in the 2011 draft (not an especially big draft for goalies once one gets past John Gibson; nine of the 19 goalies taken have yet to appear in an NHL game, and only Gibson has appeared in more than 50 contests).  Binnington has appeared in three NHL games, including two this season, but all were in relief roles.  However, he was returned to the AHL San Antonio Rampage last Sunday, Evan Fitzpatrick called up in his place. He was a second round pick of the Blues in 2016, but so far this season he had only 66 minutes over two games played with San Antonio, stopping 21 of 23 shots. 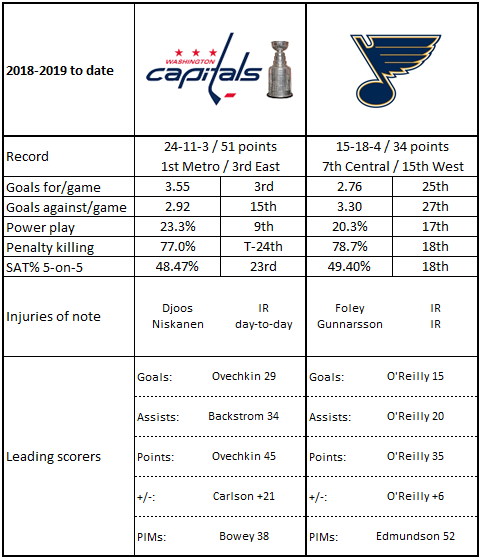 1.  If the Caps’ power play is to get well, it could be in this game.  Only Nashville has had more shorthanded situations faced on home ice (74) than the Blues (71), only Detroit has allowed more power play goals on home ice (19) than St. Louis (18), and the Blues’ penalty kill on home ice (74.6 percent) is 25th in the league.

5.  At the other end, no team in the Western Conference has allowed five or more goals in more games than the Blues (11).

1.  The first game of the new calendar year has been kind to the Caps in recent years.  Not counting the abbreviated 2012-2013 season, which started in mid-January 2013, the Caps are 5-0-2 in their last seven games to start the new calendar year, a streak that started with their 3-1 win over the Pittsburgh Penguins in the Winter Classic on New Year’s Day (night) 2011.

3.  Washington needs to lock down things better late in games.  It is rare in the NHL to lose games when leading after two periods, but no team has lost more games in regulation when leading after 40 minutes than the Caps (three times, tied with Ottawa and Winnipeg).

In 2015-2016, Vladimir Tarasenko completed a 40-goal season, his fourth straight with increasing goal totals.  He was on a short list of players thought to be heir apparent to Alex Ovechkin as the league’s top goal scorer.  It didn’t last.  Tarasenko slipped to 39 goals in 2016-2017 and then to 33 goals last season.  Through 37 games this season, he has only 11 goals, only two in his last 13 contests.  He has only one goal on home ice in more than two months, spanning 15 games.  Not that his goal scoring has mattered much to the Blues, who have more problems than Tarasenko’s at the moment.  St. Louis is only 4-4-1 in the nine games in which he has a goal this season.  Part of the issue is his shooting in general.  His 3.70 shots on goal per game to date is the second-highest average of his career (he averaged 3.83 shots per game last season), but his shooting percentage of 8.0 percent is the lowest of his career and continues a trend that started with his first full season in the league – a falling shooting percentage from year-to-year.  He is also a player who might be showing up on teams’ radar screens.  Tarasenko is 7-1-8, plus-6, in nine career games against Washington.

The evolution of an NHL player has many aspects to it, the player having to cope with any number of challenges.  One thing that Evgeny Kuznetsov has had to deal with this season is injury.  He missed five games after being checked in the head by Winnipeg’s Brandon Tanev on November 14th.  Those five games missed were as many as he missed over his previous four seasons combined.  He does seem to have dealt with it well, even as his offensive profile has changed in the before and after.  Before the injury, Kuznetsov was 6-15-21 in 18 games, including the abbreviated appearance against the Jets (he skated only four minutes before his injury).  Since the injury, the points per game have dropped slightly (from 1.17 to 0.93), but it is the mix that has changed most.  Kuznetsov has one goal and 12 assists in those 14 games since returning from injury, and he is without a goal in 12 straight games going into this contest despite recording 33 shots on goal.  Kuznetsov is 2-4-6, plus-1, in nine career games against St. Louis.

St. Louis is a team that the Caps have dominated in recent years.  They are 11-5-1 against the Blues since the 2005-2006 lockout, outscoring them 59-45.  The odd part, though, might be how well the Caps have fared in St. Louis.  Washington is 5-2-1 over that same span with wins in five of the last six meetings on the Mississippi, outscoring the Blues by a 31-20 margin, with eight power play goals to one for the Blues.  St. Louis has had trouble getting consistent offense on its own ice sheet lately.  They scored four goals in three of their last seven games on home ice, but they also scored only one goal in three of those games.  On the other hand, the Caps have scored fewer than four goals only twice in their last nine road contests, averaging 4.11 goals per game in their last nine away games while going 8-1-0.  The Caps have become a good road team and have had particular success on the road against the Blues.  It should make for a winning formula to start the new year.