The Peerless Prognosticator is ON THE AIR!!! -- Game 12: Bruins at Capitals, November 5th

The Washington Capitals look to rebound from Tuesday’s 5-2 smacking at the hands of the New York Rangers when they return home to host the Boston Bruins on Thursday night.  The Caps will be looking to extend an interesting streak.  They have gone 24 straight regular season games without losing in consecutive contests, posting a record of 17-6-1 over that span.

On the other hand, the Bruins are certainly hot in the here and now.  After dropping their first three games to open the 2015-2016 season (and being outscored 16-7 in the process), Boston is 6-1-1 in their last eight games, outscoring opponents by a 35-20 margin.  And have they spread the scoring around.  The Bruins have goals from 16 skaters and points from 19 skaters in the 6-1-1 run.

The leading goal scorers over this eight-game stretch are David Krejci and Brad Marchand with five apiece.  Marchand is on quite a tear to open the season.  His five goals in nine games is not unheard of (he had six in nine games to open the abbreviated 2012-2013 season), but only once has he recorded more than two goals in his first nine games of the season in his six-year career entering this season.  Part of his success is shot volumes that are almost Ovechkinian in their dimension.  Averaging just 2.04 shots per game over his career entering this season, Marchand has 33 shots on goal in nine games (3.67/game).  Only once in nine games has he been held under three shots on goal.  And, as if you think he might have sanded the rough edges of his reputation as a pot-stirrer, he is one of only two players in the league with at least five goals and at least 20 penalty minutes (Montreal’s Torrey Mitchell is the other).  In 19 career games against Washington, Marchand is 5-4-9, minus-3.

Krejci opened his season with a nine-game points streak, extending his points streak to 11 straight regular season games dating back to last season.  He already has four multi-point games this season, tied for the eighth-most in the league so far this season (through Tuesday’s games).  He has been a very productive power play performer, tied for the league lead in power play points (seven, with three other players, including teammate Patrice Bergeron).  Compare that to last season when Krejci had only eight power play points in 47 games played.  In 27 career games against the Caps, he is 5-13-17, minus-3.

If the Bruins have a problem, it is an unexpected one.  Tuukka Rask has spent the past six seasons establishing himself as one of the best puck-stoppers in the game.  Since assuming a regular spot in the Bruins’ goaltending rotation in 2009-2010, Rask was 133-80-34, 2.16, .926, with 25 shutouts in 261 appearances.  This season, things are a bit different, at least so far.  Rask has appeared in eight games to date, but he has a record of 3-4-1, 3.51, .876.  He has allowed five or more goals in four of his appearances.  He ranks 35th in goals against average out of 39 goalies appearing in five or more games.  His save percentage is 37th in that group.  His remedy?  “I have to make more saves.”  That seems clear.

Here is how the two clubs compare in their numbers to date: 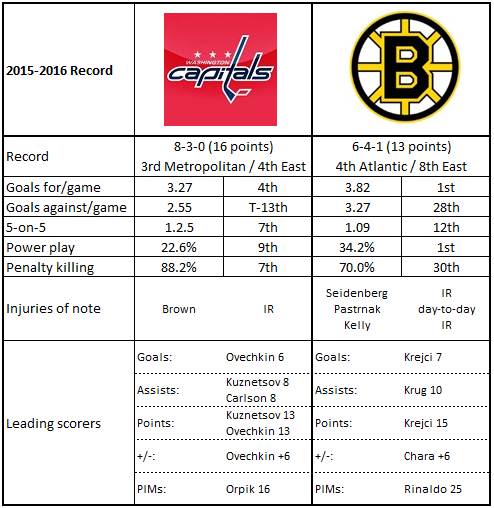 1.  The Bruins have had substantial contributions from the defense in their recent good fortune.  Over their last eight games, the Bruins defense is 4-20-24.  For the season, through 11 games, the Caps’ defense is 5-20-25.

2.  Boston has the fourth-worst team save percentage in the league (.893).  The three teams beneath them in the rankings – Edmonton, Columbus, and Calgary – have a combined win-loss record of 11-27-1.

3.  It might be worse for the Bruins but for the fact that they are allowing the fourth fewest shots on goal per game (27.1). The three teams ahead of them in the rankings – St. Louis, Carolina, and the Caps – have a combined record of 21-13-1.  It seems it is easier to save a shot you do not have to face.

5.  Boston has a middle-of-the-road possession ranking – 12th in corsi-for percentage at 5-on-5 (50.9 percent).  They do struggle late in games, though.  Their 48.0 Corsi-for percentage in the third periods of games ranks 22nd (numbers from war-on-ice.com).

4.  The lack of power play opportunities put the Caps in the bottom half of special teams opportunity differential.  At minus-0.27 (power plays per game less penalty kills per game), the Caps rank 19th overall.

5.  The Caps are the only team in the league that ranks in the top-five in Corsi-for percentage overall in each of the three periods of games: fifth in the first period (53.4), third in the second period (58.2), and fifth in the third period (54.3; numbers from war-on-ice.com).

The journey of Boston native Jimmy Hayes to the Bruins was a circuitous one.  He was drafted in the second round of the 2008 entry draft by the Toronto Maple Leafs, but never suited up for the Leafs.  He was traded by Toronto to the Chicago Blackhawks for a second round draft pick in 2010, then was traded to the Florida Panthers as part of a multi-player deal in 2013.  Finally, the Panthers traded Hayes to Boston for Reilly Smith and Marc Savard last July.  In his first season with the hometown Bruins, Hayes is one of five players with at least ten points so far (3-7-10 in 11 games).  He has points in four of his last five games going into Thursday’s game against the Caps, including a three-point night against the Arizona Coyotes on October 27th.  In five career games, Hayes has yet to record a point against the Capitals.

After John Carlson posted a three-assist game against the Edmonton Oilers on October 23rd, it looked as if John Carlson had taken his place among the top offensive defensemen in the NHL.  Through seven games he was 2-8-11, plus-3.  Unfortunately, Carlson has not recorded a point since, going without one over his last four games and finishing a minus-3 in his last game, a 5-2 loss to the New York Rangers.  His production on the power play – or lack of it – coincides with that of the Caps.  He does not have a power play point in his last four games, and the Caps have been blanked on the man-advantage over those same four games, going 0-for-9.  He does have a power play goal and a pair of assists on the man-advantage in 18 career games against Boston, posting an overall scoring line of 3-5-8, plus-3.

The Caps are catching teams at the top of their performance cycle at the moment.  Columbus won two in a row before their game with the Caps last Saturday after losing their first eight games.  The New York Rangers went into their game against the Caps with a 4-1-0 record in their previous five games.  The Bruins will go into their contest against the Caps winners in six of their last eight games.  However, you can tell when a team might be coming to the end of their performance cycle.  After scoring 26 goals in five games (a 4-0-1 record), the Bruins scored a total of six goals in two wins before losing to the Dallas Stars, 5-3, in their last outing.

On the other hand, the Caps do have that string of games without sustaining consecutive losses.  They have shown an ability to manage the schedule fairly well.  They will be facing a team that has had surprisingly uneven performances in goal, depending largely on a deep and balanced offensive led by the league's best power play to put wins together.  The Caps will be looking to shore up what was a leaky defense in their loss to the Rangers on Tuesday and take advantage of the league's worst penalty kill.  That will be incentive enough to carry the Caps into the weekend on a high note.

Posted by The Peerless at 8:08 PM No comments: