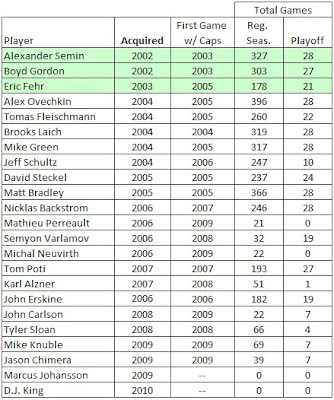 Interesting to note here that of the 23 players currently on the parent roster (or who might end up there on opening night), only three (those shaded in green) were acquired by the Caps before the lockout (we assume the 2004 draft is “post-lockout” in that it was conducted after the last game was played before the hiatus). All of them are draft picks – an early sign of building via the draft.

As for when players on this roster dressed for the first time in a Caps sweater, the results are simliar… 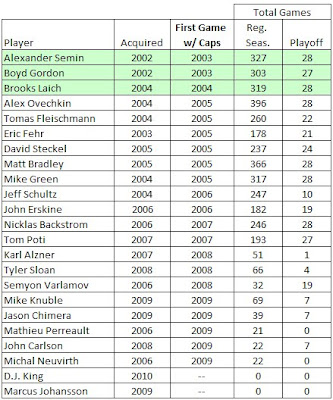 One thing we see in these first two examples is that of what we called the Caps “core” – Alex Ovechkin, Alexander Semin, Mike Green, cnd Nicklas Backstrom – only Semin’s acquisition and appearance for the Caps predates the lockout

Which leads us to the matter of tenure. As a group, this result is interesting… 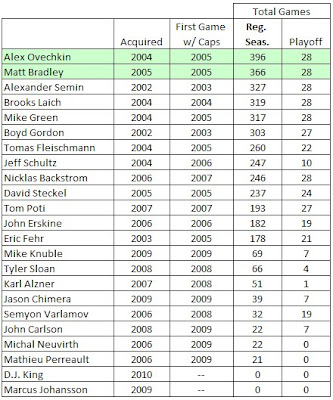 Only two Caps – Ovechkin and Matt Bradley – have as many as four full years of game experience as a Capital. In fact, Ovechkin is now the “old man” of the Caps in terms of games played in the red sweater. However, thinking of the “core” again you see that all four of that group have logged more than 300 games in a Caps jersey. That is, of course, the group around which the rest of the team is built, and it is the rest of teh team that is likely to show signs of turnover over time.

In fact, ten of the 23 players have fewer than 100 games in a Caps sweater, and of that group four of them – Mike Knuble, Tyler Sloan, Jason Chimera, and D.J. King – come to Washington from other organizations. Two of the other three who have less than 200 games in a Caps jersey – Tom Poti and John Erskine – came from elsewhere.

What can we conclude? As we noted, this is something of the companion to the “blueprint” we wrote about. There is the core that we might expect will be here for a while (certainly in the case of Ovechkin and Backstrom). There are other players here, largely in that 200-300 games played range, who are important to the Caps’ success, but who might end up somewhere else before too long as their contracts expire and their price tags become too high.

But there is something else in the overall that we should not lose sight of. Alex Ovechkin has not yet reached his 25th birthday, and he is the longest tenured Capital in games played for the club. This is first, still a young team that just hasn’t been together that long, and second, one for which you might say the ingredients are still mixing. That they have come so far, so fast, from those back-to-back 70-point seasons coming out of the lockout is testimony to the sheer talent on the top end of the roster. But they are now at the point where the rest of the roster is catching up to it in terms of gaining the game experience as a group to be successful.
Posted by The Peerless at 6:31 AM 5 comments: