“Just remember, once you're over the hill you begin to pick up speed.”
-- Arthur Schopenhauer

It is a bit early to be pronouncing a 32-year old defenseman “over the hill,” but there was something of a head-scratching quality to the season Washington Capitals defenseman Matt Niskanen had in 2018-2019.  He tied a career high of seven even strength goals this season, but his overall point total dropped for the second straight season, from 39 points two years ago to 29 points last season to 25 points this season while playing more games this season (80) than in either of the last two.  He also finished a minus-3, his worst plus-minus rating since he was minus-3 in a 2010-2011 season that was split between the Dallas Stars and Pittsburgh Penguins.

Of some alarm, his season deteriorated (at least from a points perspective) from a good start.  Over his first three ten-game segments, Niskanen recorded five, four, and five points, respectively, going 4-10-14, even, in 30 games.  The fourth segment was key, though.  He was 1-0-1, plus-1, in the first six games of that segment.  In that sixth game against Carolina, Niskanen was chasing down a puck in the corner to the right of Braden Holtby mid-way through the third period with the Caps ahead, 2-0.  As he approached the wall, he was nudged in the right shoulder by Justin Williams, and then he was pushed face-first into the boards by Clark Bishop.  He missed the remainder of that game and the next two.

Niskanen strugged in his own end upon his return.  Although he was 2-2-4 in his first 14 games upon his return, he posted a minus-12 rating.  He rebounded to go 1-5-6, plus-8, in his last 30 games, but that 14-game stretch was a killer on an individual level for his numbers.  It begs the question, was it an injury-influenced off year for Niskanen (who was 6-15-21, plus-9, in 66 games not including the 14-game struggle he had on his return from injury), or was it an indicator of diminishing production to come? 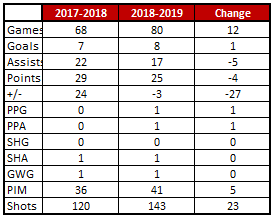 Fearless’ Take… Matt Niskanen has long been a minutes-eating defenseman.  Including this season, he has averaged more than 20 minutes per game for seven straight seasons and averaged 22:20 per game over that span.  Even though his minutes were off some this season (his 21:56 per game was his lowest since he averaged 21:18 per game for Pittsburgh in 2013-2014), heavy ice time loads did not seem to burden him or the team.  In 16 games in which he skated more than 23 minutes, he was 3-5-8, plus-4, and the Caps were 10-3-3.

Odd Niskanen Fact… Matt Niskanen recorded three or more shots on goal in 23 games this season, but the Caps were just 9-11-3 in those games.  They were 11-4-2 in the 17 games in which he did not record a shot on goal.

Bonus Odd NIskanen Fact... Matt Niskanen is one of two first round picks of the 2005 Entry Draft who play with the Caps.  T.J. Oshie is the other.  Neither was selected by the Caps, Niskanen taken by Dallas with the 28th overall pick and Oshie taken by St. Louis with the 24th overall pick.  The Caps did have two first round picks in that draft -- Sasha Pokulok (taken 14th overall) and Joe Finley (taken 27th overall, one pick before Niskanen).  Neither played a game for the Caps.

The Caps had a special night to open the season, a 7-0 win over the Boston Bruins in the Stanley Cup banner raising.  However, the Caps went 1-2-1 in their next four contests before hosting the New York Rangers.  The Rangers arrived in Washington as winners of two of three games after a struggling 0-3-0 start.  The visitors put the Caps down early with a Mika Zibanejad goal six minutes into the contest.  John Carlson got the Caps even before the first intermission, and Alex Ovechkin gave them a lead early in the second on a power play.  The teams exchanged power play goals before the second intermission, but the Rangers got even mid-way through the third period on a Chris Kreider power play goal.  That set up overtime.

Just as the clock was passing the two-minute mark of the 3-on-3 session, NIskanen fed the puck up ice from his own end to Evgeny Kuznetsov circling at the red line.  Kuznetsov skated the puck down the middle and faked a shot before peeling off to the left wing circle.  He and Niskanen crossed, giving Kuznetsov an opening to stwp up and send a shot high to the glove side of goalie Henrik Lundqvist.  Although he got his glove on the shot, Lundqvist could not control it, and it dropped to his left, just where Niskanen was crossing in front.  Niskanen whipped a shot past a fallen Lundqvist into the back of the net for his first goal of the new season, giving the Caps the 4-3 win 2:18 into overtime.
Game to Forget…  October 11th at New Jersey

Through their first three games of the season, the Caps were 2-0-1 and scored 18 goals.  Going to New Jersey to face a Devils team that finished the previous season 17th in scoring defense offered the promise of further padding the early season offensive stats for the Caps.  Things did not work out quite that way.  Before the game was 20 minutes old, the Devils had a 2-0 lead, both goals from Kyle Palmieri, and Matt Niskanen got an up-close look at each, being on ice for both.  By the time it was over, the Devils had a 6-0 win, Niskanen also being on ice for the last of those six goals.  It was the first of three instances this season in which Niskanen posted a minus-3 rating, adding three shots on goal and two hits in his 19:46 in ice time.

Postseason…  About the best one could say of the postseason Matt Niskanen had against the Carolina Hurricanes was that it was uniformly mediocre.  He was 0-1-1, plus-2, with four shots on goal in four home games, 0-1-1, minus-2, with three shots on goal in three road games.  He had two blocked shots in five games, three in the other two.  He had two hits in four of the games.  He skated more than 20 minutes in all seven games, including a 37:35 log in the double-overtime loss in Game 7.  It was at the end of those 37-plus minutes that he could not quite close the distance between himself and Justin Williams as Williams chased down a loose puck along the right wing wall, nor could he block Williams’ centering feed to Brock McGinn for the game-winning, series-clinching goal for the Hurricanes.

Looking ahead… Matt Niskanen has two more years at a $5.75 million cap hit on his current contract.  That cap hit with the other contract issues the club has, and perhaps the combination of his age (he will turn 33 in December) and diminished production in 2018-2019, has led people to wonder if he will be traded in this off-season.   Complicating the issue is that Niskanen has a modified no-trade clause that allows him to submit a 10-team no-trade list (source: capfriendly.com).

Matt Niskanen has been with the Caps five years.  In that time he has averaged 78 games played per year, and he has five of the top 11 average ice times per season (John Carlson also has five, and Dmitry Orlov has one).  All of those missed games have come after he appeared in all 82 games in each of his first two seasons with the Caps.  He has skated a lot of hard minutes, and the chips and dents might be showing as he heads toward his age 33 season, what would be his 13th in the NHL.

It was the legendary baseball executive Branch Rickey who once said, “trade a player a year too early rather than a year too late.”  It might be his most famous quote.  But he also said, “never surrender opportunity for security.”  And this is the situation that the Caps face.  Is Matt Niskanen showing the first effects of a long career in which he has skated a lot of minutes, or was the 2018-2019 season, arguably his worst statistically since the 2010-2011 season in which he was traded to Pittsburgh after going 1-9-10, minus-3, in 63 games for Dallas, merely an aberration?  Will the Caps bet on the latter, which could end up being a surrender to security if it isn’t an aberration?  Or, will they look to move the player to give the club an opportunity to free up resources to address other players’ contract situations at the risk that this season really was just a hiccup in Niskanen’s career?

Photo: Jim Romsaas/Mesabi Daily News
Posted by The Peerless at 12:00 PM No comments: