And so, 2011 comes to an end. It comes with a three-game winning streak to close the year, the first such streak in more than two months. 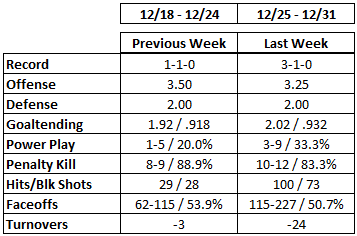 This was the first three-win week for the Caps since the second full week of the season. It included the first three-game winning streak since the seven-game season opening winning streak ended. The 8-5-1 month represents a 100-point pace, and the eight wins tied this Capitals team for the second best win total for December since the lockout. After a 1-3-0 start under new coach Dale Hunter, the Caps have gone 7-3-1 under their new bench boss.

The week was a case of getting stronger as time went by. It was not just that the Caps improved on the two-goal effort in Buffalo on Boxing Day to score 11 goals in their last three games. The Caps got stronger as games wore on, scoring two goals in the first period of games this week, four in the second period, and seven in the third, including four in the week’s last game against Columbus. Three of the four members of the “Young Guns” still in the lineup had big weeks. Alex Ovechkin led the way, going 5-2-7, plus-4 in the four games. Alexander Semin was 3-2-5, plus-3; and Nicklas Backstrom was 1-4-5, plus-3.

There was the good and the bad this week. Michal Neuvirth had a difficult time in his start against Buffalo to open the week – three goals on six shots in just over 11 minutes. I was his fifth straight start, and five was not the charm. He had been very good in his previous four starts (2-1-1, 1.48, .942, and one shutout), but this performance got him a seat on the bench for the rest of the week. Meanwhile, Tomas Vokoun was 3-0-0, 1.33, .956. Vokoun is currently on a pace to play about 3,100 minutes this season, which would be his lowest workload since the 2006-2007 season (a season in which he missed 20 games to a thumb injury). The comparatively low workload might have been a plan at the start of the season to keep him fresher for the spring, but it has been the product of inconsistent performance. His finish to the 2011 portion of the season might be a signal he is finding a rhythm in his game.

The Caps have struggled with their power play this season. December was no exception. Toss out the 4-for-6 game they had against Toronto on December 9th, and the Caps were 2-for-25 coming into this week in nine games. Not only had they been inefficient (8.0 percent), they were not getting many opportunities (2.8 per game in those nine games). This week they did not fare any better getting opportunities – 2.25 per game and only a total of five in the last three games of the week. But they were more efficient. The Caps had power play goals in three of the four games and converted two of their last three chances. If there was something odd about the week it was that the Caps had six different players record power play points (even goalie Tomas Vokoun got in on the act with an assist), but only one Capital recorded any power play goals. Alex Ovechkin had all three for the week, more than doubling his season total, which now stands at five power play goals.

The Caps allowed power play goals on each of the first two shorthanded situations they faced this week, part of a four-goal ambush by Buffalo on Monday in the 4-2 Sabres win. It got much better after that. After allowing goals on the first two power play shots they faced, the Caps killed off ten power plays in a row to finish the week, allowing 15 shots in those ten power plays. It closed an odd month of penalty killing for the Caps. For December they were 39-for-46 (84.8 percent), but five of the seven goals against came in two games – a 3-for-6 effort against Florida on December 5th and a 3-for-5 effort against Buffalo last Monday. They were 33-for-35 otherwise (94.3 percent).

The telling point about this category this week was the blocked shots. The Caps registered only eight in a 4-2 loss to Buffalo on Monday, but they had 20 or more in each of the other three games. This season, it would be normal to see Alex Ovechkin or Troy Brouwer at the top of the hit parade, and they are this week. Ovechkin had 14, and Brouwer had 13. But it was Matt Hendricks who led all Caps with 15 in the four games. Karl Alzner led the Caps with 12 blocked shots in the four contests, while Roman Hamrlik had ten.

In the end it was a near-.500 week in the circle. The Caps did win the last three games in this category after having a difficult time of it (22-for-53) in the first game of the week. It was not a very good week in the offensive end, though, with the Caps winning only 29 of 65 draws (44.6 percent). But the Caps allowed only eight goals for the week, and part of that might have been a product of winning 40 of 71 faceoffs in the defensive end (56.3 percent). Of the three Caps taking at least 20 draws for the week, it was an uneven week. Jeff Halpern finished above 50 percent with 18 wins in 31 draws. But Nicklas Backstrom was 30-for-65, and Brooks Laich split 84 draws down the middle.

That is not a misprint. The Caps lost all four games in the turnover count (takeaways, giveaways), and did so rather handily in the first three games (minus-23). The Caps combined number of takeaways and giveaways from opponents totaled only 37 for the week, no more than 11 in any single game. Compare that with the 61 turnovers they committed (their own giveaways and the takeaways by opponents), and it made for a difficult week in this category.

The week started in an ugly fashion with a bad loss to Buffalo, but it ended well with three wins. The players who have to be the best players were just that for this week. Alex Ovechkin conjured up visions of his most prolific scoring days. Nicklas Backstrom continued his patient and consistent production. Alexander Semin finally saw some pucks go in the net in what was his best week of the season. But a second line of Jeff Halpern, Troy Brouwer, and Marcus Johansson was individually 2-2-4 for the week and was broken up by week’s end. But at least they scored. The third line of Brooks Laich, Jason Chimera, and Joel Ward did not record a point and was a combined minus-5. But the goaltending was good (at least the Tomas Vokoun part of it), the power play found some consistency (thanks in large part to Ovechkin), and the penalty killers were superb to end the week. Not that there is not a lot of work yet to be done, but it was a good way to end the week and to end 2011.
Posted by The Peerless at 12:02 AM No comments: