Jeff Schultz
Theme: “Some have greatness thrust upon them, but not lately.”
-- Frank Dane

(click pic for larger image)
It seems like a long time ago, now, that “plus-50” that Jeff Schultz put up in 2009-2010. It was the big number in a career year for games, assists, points, penalty minutes, and shots on goal. He was rewarded for that effort in July 2010 with a four year/$11 million contract. Since then, however, Schultz has returned to earth.

In 2009-2010, Schultz had a total of 11 “minus” games all season. Last year he had ten such games by the Winter Classic on January 1st. It was just once indicator of his settling into what might have been a more reliable level of performance. He finished the 2010-2011 season having played only one fewer game than in 2009-2010, but saw his point total cut by more than half (from 23 to 10), his shooting percentage dropping steeply (from 7.0 percent to 2.9 percent), and even his penalty minutes by more than half (from 32 to 12). And never a big hitter to start with, that number dropped from 66 to 53.

Perhaps Schultz was merely performing at a more reasonable level for his particular skill set. But then the 2011-2012 season began. Schultz did not start badly; in his first seven games (coinciding with the Caps’ 7-0-0 start) Schultz was on ice for only three of 14 goals, two of them in a 6-5 Gimmick win against Tampa Bay, the other a power play goal in a 7-1 win over Detroit. Even when the Caps went on the road and saw their winning streak end, he wasn’t on the ice for much of the damage – two of the 13 goals allowed.

But then the wheels started coming off. He was on ice for four of the next 11 goals allowed by the Caps. It set up a coincidence of events on November 11th – Mike Green ready to return to the lineup after a six-game absence with an injured ankle and the Caps needing to create a slot in the lineup for that return. It was Schultz who sat for what would be a 3-1 win over New Jersey.

Schultz returned to the lineup in the next game, but he – and the Capitals – were entering a downward spiral that would cost Bruce Boudreau his job. The Caps went 2-5-0 in the seven games leading up to Boudreau’s dismissal, and the Caps allowed 31 goals in the process. Schultz was minus-2 in those games. Not the worst, but any stretch, but not making a case for a heavy workload, either.

Dale Hunter took over in time for the Caps to host the St. Louis Blues, and for Schultz to be a healthy scratch. Starting with that contest Schultz would dress for only six of the next 27 games, averaging about ten and a half minutes a game. Even with Mike Green having missed all but two games in this stretch, Schultz was not getting a sweater, sitting in place of Dmitry Orlov, John Erskine, and even Tomas Kundratek for five games.

His underlying numbers where not especially strong, and here there is a comparable basis to judge those numbers. Dennis Wideman and Jeff Schultz faced roughly equivalent quality of competition (numbers from behindthenet.ca). However, starting from that point Schultz’ numbers were quite inferior to those of Wideman at 5-on-5. Pick your poison – On ice Corsi? Wideman was in negative territory here (-1.09), but Schultz was considerable worse (-4.94). Corsi relative to competition? Same (+0.132 to -0.249). It is easy to get a bit too caught up in these numbers when one sees that in goals against on ice per 60 minutes, Schultz fares better (2.11 to 2.47), and he does have a slightly better PDO value. But this still seems a far cry from that defenseman who finished a plus-50 two seasons ago. Here how this year’s record compared to last: 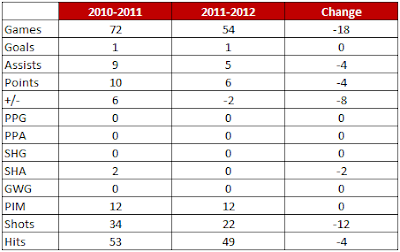 Game to Remember… November 1, 2011. In a game that would be remembered more for who didn’t skate at the end of regulation than who did when the game-tying goal was scored to send the game with the Anaheim Ducks into overtime.  When the game-winning overtime goal was scored, Jeff Schultz earned a secondary assist on Nicklas Backstrom’s overtime winner against the Ducks in a 5-4 win. Schultz got the play started when he pinched down the left wing wall to keep a loose puck in play as two Ducks were closing on him. He wristed the puck toward the net, where it hit a Duck stick, then Alex Ovechkin’s stick before settling in front of Backstrom at the doorstep where he flipped it in for the winner. Schultz also finished a plus-2, one of only two games in which he would finish that high on the ledger for the season.

Game to Forget… March 27, 2012. In what would be his last regular season game of the year, Schultz was on ice for two goals in the first five shifts he skated as the Buffalo Sabres took a 2-0 lead into the first intermission. He skated only two more shifts in the game – both early in the second period – and managed only 5:07 in ice time (his fifth lowest minute total in 373 career regular season games) while finishing minus-2 in a 5-1 loss to the Sabres.

Post Season… Perhaps surprisingly, given his sporadic activity in the last two-thirds of the season, Schultz dressed for 10 of the Caps’ 14 post-season games. But, like the regular season, he played himself to the bench before coming back to the ice. In Games 1-3 Schultz was on the ice for four of the six goals scored by the Boston Bruins. In a close fought, low scoring series, it earned him a spot in the press box for four of the next five games (the exception being the Game 7 clincher against Boston). Schultz returned for good in Game 2 of the second round series against the Rangers. He would fare marginally better in the defensive end, having been on ice for four of the 12 goals New York scored in the last six games of the series. But Schultz also had the misfortune all through the playoffs of never being around when a goal was scored by the Caps. Only once in 10 games was he on ice for a goal scored (Game 5 against the Rangers, in a 3-2 overtime loss).

In the end… One has to wonder what lies ahead for Schultz. Two years ago he was coming off a record-setting season (best plus-minus in franchise history and the highest of any player in the league since the lockout) and was about to sign a four-year deal. This past season, he was a defenseman with a $2.75 million cap hit who was not much more than an occasional player.

Looking at the defense corps under contract (or likely to be) for next season, it is a group that in addition to Schultz includes: Mike Green, Roman Hamrlik, John Erskine, Karl Alzner, John Carlson, and Dmitry Orlov. The Caps are not a team deep in defensive prospects, at least not of the sort one would expect to get any significant time with the club next season. This would seem to leave Schultz on the bubble, with John Erskine and Dmitry Orlov (acknowledging the possibility of a sophomore slump for the latter) for the sixth defenseman spot. It is a future as uncertain as his 2011-2012 season seemed to be, one that seems now an eternity from the great season he had just a couple of years ago.