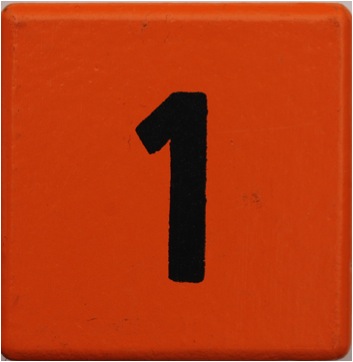 The Washington Capitals can now be said to be facing a bit of adversity.  After their 4-0-1 start, they were pasted by the Montreal Canadiens by a 7-1 margin, then lost in the dying seconds to the Winnipeg Jets on Tuesday, 2-1.  The four game road trip began its inbound leg with a visit to Calgary to take on the Flames on Saturday night.  The Flames are not expected to challenge for a Stanley Cup this season, but they did come into this game having won all three of their home contests to date.  The Caps, on the other hand, were 0-2-1 in three road games.

Head coach Adam Oates shook things up a bit for the Caps, inserting Jack Hillen on the blue line for his first start, giving Jeff Schultz his second start of the season (those two replacing Dmitry Orlov and John Erskine), and sitting Marcus Johansson in favor of Wojtek Wolski.  Calgary made a change of their own, giving Leland Irving his first start of the season in goal spelling Miikka Kiprusoff.

Washington came out sluggish to open the contest, playing the first half of the first period primarily in its own end.  Calgary, however, was tied for 24th in scoring last season for a reason.  The Flames were unable to take advantage of Washington’s inability to generate any momentum coming out of their own end, but got some help when Matt Hendricks was sent off for cross-checking at 9:41.

Calgary converted the power play when Jarome Iginla muscled in close and stuffed the puck past Caps goalie Braden Holtby.  The Caps had their own chance on the power play when defenseman Chris Butler was whistled for holding.  The Caps could not manage so much as a shot of goal on their power play, a shortcoming that would cost them when the Flames added a second goal shortly after the penalty expired.  Hillen tried to clear the puck from the Caps’ zone, but Jay Bouwmeester managed to glove it down and then pass the puck to Curtis Glencross for a lay-up from Holtby’s left.  That ended the scoring in the first 20 minutes, the Flames holding a 2-0 lead.

The second period settled into a pattern of action largely limited to the neutral zone.  Neither team mounted much offense, even when presented with opportunities on the power play.  The teams exchanged a pair of unproductive power plays on their way to the 40-minute mark, at which point the score remained 2-0 in favor of Calgary.

Early in the third period the Caps were charged with their fourth minor penalty of the contest, a tripping penalty to Mathieu Perreault.  Calgary was sloppy in executing its power play, though, and the Flames found themselves chasing the puck down into their own end with frequency.  The artlessness with which they were handling the puck bit them when Mark Giordano tried to send the puck cross-ice and found only Troy Brouwer’s stick.  Brouwer deflected the pass into the neutral zone and beat Giordano to it.  There was nothing left between Brouwer and the Calgary net but open ice.  A deke and a shot later, the Caps had halved the deficit with their first shorthanded goal of the season.

The goal seemed to spark the Caps, who tilted the ice to the Flames end.  What they were not able to do, however, was to deposit the puck over the goal line.  The circle of justice came back on itself late in the period, though, when Joey Crabb fought off two Flames along the boards to slide the puck to Perreault in the right wing faceoff circle.  Perreault spun around at the dot and fired a shot that surprised Irving and sailed past him on the far side, just inside the post, to tie the game with less than four minutes left in regulation.  Jack Hillen got the second assist on the goal to make it three-for-three in players who spent time in the penalty box in this contest.

Neither team could muster much in the way of scoring chances in the last few minutes of regulation, and the game went to an extra five minutes.  The Caps had a chance early on in overtime, but Wojtek Wolski’s deflection of a John Carlson drive hit the post and caromed out.  It would be the best and last chance the Caps would have in the extra frame.  With the clock approaching one minute in overtime Mark Giordano found Alex Tanguay at the edge of the left wing circle for a shot.  Braden Holtby fought it off, but the rebound found its way to the stick of Jarome Iginla to Holtby’s left.  Iginla had an open net to shoot at, and he did not miss, burying the puck and the Caps’ chances for a comeback in the back of the net for the final 3-2 margin. 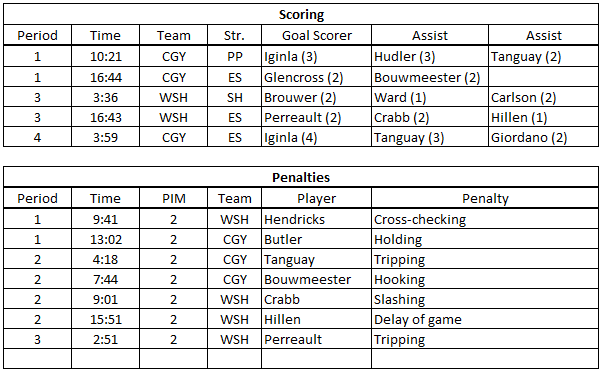 Posted by The Peerless at 7:25 AM No comments: