A Tale of Two Games on April 5th, Then and Now 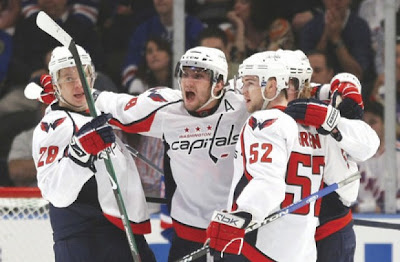 The Washington Capitals still need four points. Any combination of points they earn plus points the Buffalo Sabres fail to earn adding to four clinches a playoff spot for the Caps. This is where the Caps find themselves in a season in which most folks would have assumed the Caps would have clinched a spot a month ago.

And as fate and the schedule would have it, the Caps get an opportunity to get half of that points requirement tomorrow night against the Florida Panthers. We have been here before. Four years ago to the day from tomorrow night’s game – April 5, 2008 – the Caps faced these same Florida Panthers in the last game of the regular season needing a win to reach the playoffs. A win would allow them to win the Southeast Division, their only path to the post-season in the 2007-2008 season.

Only five players skating that night in 2008 are likely to be taking the ice tomorrow night – Alex Ovechkin, Alexander Semin, Brooks Laich, Nicklas Backstrom, and Mike Green. Figures. These are the players in whom the Capitals have placed their future with long-term contracts or with substantial compensation in the short term.

Back then, though, they were still young and inexperienced in the pressures of winning in the home stretch in the NHL. As a group they had an average of fewer than 200 games of experience apiece. But on that night the five of them were in what really was a “must win,” win-or-go-golfing game. All of them had an impact.

Brooks Laich assisted on the first goal, had three blocked shots, and was a plus-1 in just under 16 minutes of ice time.

After Florida tied the game early in the second period, Alexander Semin assisted on the second goal. He would also thrust the dagger into the Panthers’ chances to win with a goal of his own in the third period to put the Caps ahead, 3-1. He finished the game 1-1-2, plus-1, and led the team with eight shots on goal in almost 19 minutes of ice time.

Mike Green added an assist on the goal that broke the tie, had five shots on goal of his own, two hits, and a blocked shot in almost 28 minutes of ice time.

Nicklas Backstrom, finishing up his rookie season, set up Semin on the insurance goal early in the third period, had three takeaways, and skated more than 23 minutes.

Alex Ovechkin did not record a point, but he was otherwise a force of nature on his own – 13 shot attempts (five on goal), three hits, two takeaways, and more than 23 minutes of ice time.

On that night -- after a division-clinching 3-1 win -- a rather high-ranking member of Capitals management said, “there’s a little bit of destiny in this team. They’re very confident. It might be that they’re young and that they don’t know history. They don’t know about anything but looking forward.”

Well, here we are, forward by four years. And once more the Caps – these five players in particular – have an opportunity to measure themselves against that night. Have they developed the skill to dominate an opponent that stands directly in front of them in the standings and that they almost have to beat to qualify for the post-season? Have they learned the lessons imparted them in that game in 2008 and in those last games of that season by Sergei Fedorov in how to win when the pressure is on? Have they developed the character to refuse to lose when facing what could be a long and difficult summer if they did just that?

It is a mere quirk in the schedule that pits the Panthers against the Capitals once more at season’s end with a playoff spot on the line. And maybe the game in 2008 is not a fair measuring stick to compare the young Caps to the older versions of themselves.

Then again, perhaps it is. In 2008, these five players were skilled and with great potential. Ovechkin was a record setter (65 goals that season, tops for a left wing in NHL history). Mike Green would become one later (eight consecutive games with goals in 2009, a record for a defenseman). Semin and Backstrom have put up big individual numbers, and Laich developed as one of the most versatile players in the league.  But in 2008, these players were still depending on the experience of veterans such as Viktor Kozlov, Sergei Fedorov, and Tom Poti.

Now, they are the ones everyone is looking to, the ones who have to lead the Caps tomorrow night against Florida and past the New York Rangers on Saturday into the playoffs. Tomorrow night we will see how far they have come since that April 5th night four years ago.
Posted by The Peerless at 6:33 AM 1 comment: