The Peerless Prognosticator is ON THE AIR!!! -- Game 50: Flyers at Capitals, January 31st

The January portion of the regular season schedule comes to a close for the Washington Capitals on Wednesday night when they host the Philadelphia Flyers in a nationally-televised game at Capital One Arena. The Caps will be looking for a measure of revenge after dropping a 2-1 overtime decision on this same ice sheet just ten days previously.

The Flyers will be looking to resume the momentum that they built going into the All-Star Game break, going 8-2-0 in the ten games before the break. That 8-2-0 record tied the Boston Bruins and Calgary Flames for the best record in the league (16 standings points) since January 4th, when the Flyers embarked on their run.

Sean Couturier, who went into the Caps game back on January 21st as one of, if not the hottest player in in the league, has seen his goal-scoring dry up somewhat. While his total of eight goals over the Flyers’ last ten games still leads the team over that span, he is without a goal in his last four games. Yet he does have three assists over those four games to give him an 8-5-13, plus-5, scoring line over that ten-game span. He has been very much the go-to guy in this run, three of his eight goals being game-winners (one of them in overtime), his 27.6 percent shooting percentage best on the team, his 58.3 percent winning percentage on faceoffs leading the club, his 2:15 in shorthanded ice time per game leading all Flyer forwards, and his 21:36 per game in ice time also leading the club’s forwards. Couturier is 6-6-12, plus-5, in 23 career games against the Capitals.

The Flyers do not often have a difficult choice to make in goal, at least not one based of good performances, but such might be the case for this first game coming out of the All-Star Game break. Brian Elliott has 46 saves on 49 shots (.939 save percentage) in his last two appearances before the break, one of them a 27-save effort in the 2-1 overtime win over the Caps on January 21st. It is an improvement over his previous seven appearances in which he topped .900 in save percentage just once (.861 overall despite going 4-3-0 in those games). If anything, Elliott seems to be the designated “road” goalie at the moment, his last four appearances and eight of his last 11 coming outside of Philadelphia. He does have a better save percentage on the road (.917) than he does at home (.896), although his road record (10-6-4 in 20 games) is not much different from his home record (9-5-3 in 18 appearances). The odd statistic here is that Elliott has allowed five shorthanded goals this season, all of them on the road. He also allowed 16 of his 27 power play goals against on the road, a 21-11 difference in special team goals allowed on the road versus at home. Elliott is 8-5-0, 3.05, .895, in 15 career appearances against the Caps.

The goaltender situation is complicated further by having both goaltenders nursing ailments.  Elliott was listed day-to-day with a lower body injury, and Neuvirth was reported to have a stomach virus.  General Manager Ron Hextall said, “I’m hoping both are able to play.”  If neither could, the duties might fall to Anthony Stolarz, the club’s top prospect goalie in the AHL.  However, he had surgery on the same knee twice in five months and has not played this season.  Alex Lyon and Dustin Tokarski have split duties with Lehigh Valley, the Flyers’ affiliate in the AHL. 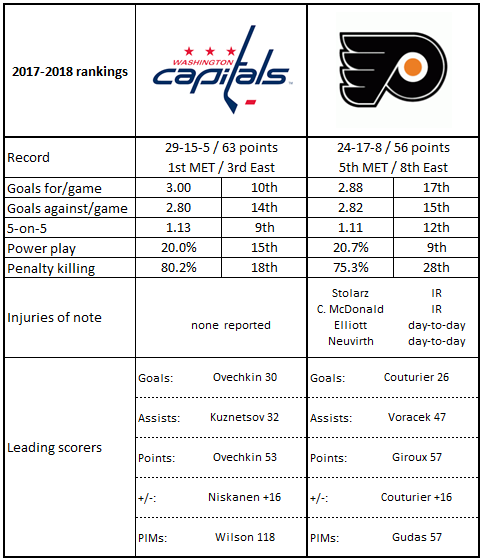 1.  Even when a team is going well, you get hints that the run might be coming to an end. Consider the Flyers’ 8-2-0 run of late. They started it with four straight wins, outscoring opponents by a 21-11 margin, all of the wins by multi-goal margins. However, in going 4-2-0 in their last six contests, they have been outscored by opponents, 16-13, and three of their wins came in overtime. Both of their losses were by 5-1 margins (to the Rangers and to Tampa Bay).

2.  Perhaps one factor in the Flyers’ success of late is the time spent on special teams. They have spent 54:10 over their last ten games on the man advantage, and their 28.1 percent power play conversion rate is fifth in that span. And, although their penalty kill over those ten games is just 74.1 percent (21st over that period), they have spent just 42:50 killing penalties, and they have a plus-1 special teams goal differential (nine power play goals scored plus a shorthanded goal, seven power play goals allowed plus two shorthanded goals allowed).

3.  The Flyers have picked up their pace in taking penalties. They have 100 penalty minutes over their last ten games, almost half of them accounted for by three players: Scott Laughlin (21), Wayne Simmonds (12), and Michael Raffl (11).

1.  The Caps go into this game with a three-game home losing streak (0-2-1), tying their longest of the season (October 10-21). The difference is that all three of the losses in the earlier streak were in regulation.

2.  Four of the Caps’ last eight home games ended in extra time – three in overtime (two wins, one loss) and one in a Gimmick (a win).

4.  Speaking of defensemen, John Carlson has 17 of the 18 points recorded on the power play by Capitals’ defensemen this season (3-14-17). Dmitry Orlov has the other point, an assist.

Only two players born in Austria have more games played in the NHL than the Flyers’ Michael Raffl (318): Thomas Vanek (934) and Michael Grabner (522). https://www.hockey-reference.com/friv/birthplaces.cgi?country=AT&province=&state= He is also third on that list in points (108), trailing Vanek (732) and Grabner (239), although he could be caught by a big game from the Caps’ Andre Burakovsky (104 points). Granted, the list of players born in Austria is not a big one, but Raffl has carved out a solid career over the last five years in Philadelphia, which isn’t bad for an undrafted free agent signed by the Flyers in 2013.

What he has been unable to do, though, is to recapture the level of production in his sophomore season in 2014-2015 when he had 21 goals in 67 games. He had just 21 goals in 134 games over the following two seasons. This year, he seems to have at least taken a step toward that higher level of production with nine goals in 49 games, topping his eight-goal total of last season in 52 games. He has been chipping in some secondary scoring in the Flyers’ 8-2-0 record over their last ten games with points in five of the games (3-2-5), and his plus-7 over that span is best on the team. In 17 career games against the Capitals, Raffl is 3-3-6, plus-1.

The Capitals had hopes this season for rookie defensemen Madison Bowey and Christian Djoos, the former a right-handed defenseman and the latter a left-handed shot.  These were to be the first in the next generation of defensemen to take their place with the Caps.  At the moment, though, their respective handedness has some relevance as the rumor mill starts to grind in earnest with the trading deadline approaching.  One such line of rumorizing has former Capital Mike Green – a right-handed shot currently playing for the Detroit Red Wings – as a possible target for the Caps.  This could conceivably bump Bowey to the press box, much as the Caps’ acquisition of Kevin Shattenkirk last season at the deadline pushed Nate Schmidt out of the lineup for stretches.

Last season, Shattenkirk was a luxury on a loaded team (a fat lot of good it did, though).  This season, Green – or a similar defenseman – might be a necessity.  It’s not that Bowey has been bad, but he has not been able to provide consistency (not unusual for a rookie) and has had limited minutes (13:30 per game).  One might argue that Bowey's numbers suffer from his pairing for large chunks of minutes with Brooks Orpik, but perhaps the question and concern going forward is one of whether the Caps want to put two rookies – Bowey and Djoos – in the playoff crucible this spring.  If the Caps were a middling contender, a club that might make the lower half of the postseason draw but likely a one-and-done team if they did make it, then giving both experience might not be as much a concern.  But the Caps are a division leader, by the second-largest margin of the four division leaders, and might be closer to making a deep postseason run than folks might have thought back in October.  It makes adding a piece like Green, perhaps at the expense of Bowey this season, something to consider.  Bowey has picked up his scoring pace a bit in recent games with four points in his last ten games (all assists; he is looking for his first NHL goal), and he is plus-2 in his last eight games after not posting a plus game in 21 consecutive games (minus-5) dating back to November 12th.  He does not have a point and is minus-3 in two games against the Flyers this season.

The Metropolitan Division is cannibalizing one another. Seven teams are separated by just six points in their intra-divisional records at the All-Star Game break: 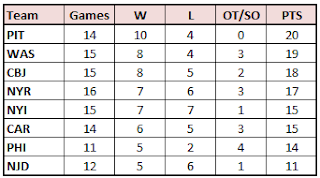 This game will open a stretch in which the Caps play four division opponents over their next five games – the Flyers, at Pittsburgh against the Penguins, and after a home date against the Vegas Golden Knights a home-and-home set of games against the Columbus Blue Jackets. If we can dream a bit, a sweep of those divisional contests would all but assure the Caps of a playoff spot if not the top spot in the division. Conversely, losing all four would make a tight division that much tighter just before the Caps go off on a four-game road trip in mid-February that will start a stretch run in which 16 of the Caps’ last 27 games are played on the road. It puts a premium on winning games like Wednesday night’s contest against the Flyers.