Next up, the cousins and I take a look at… 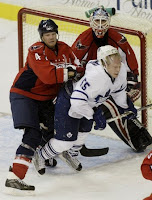 John Erskine
Last Year: 2-7-9, +1, 96 PIMs, 102 hits
Career Average (per-82 games): 2-6-8, -16, 186 PIMs
Feerless’ Take: Fans take to stars, but rosters accommodate 23 players, generally seven or eight of them being defensemen. John Erskine is probably not going to be a star in the league, but he can be valuable as a 5-6-7 defenseman. Last year, he filled in for 51 games and was on the minus side of the ledger for only 14 of those games. In fact, except for a four-game struggle from February 15-23, during which he was -6 and on the ice for seven of 14 goals scored against the Caps, he played rather well for his role. In the eleven games he played after that streak to finish the year, he rebounded to 0-1-1, +5 (with no minus games), averaging 14:30 in ice time a game. He is not a top-four defenseman on this team, but he is not a liability on it, either, so long as he plays his role and is not asked to take on major minutes or shifts against top offensive lines.
Cheerless’ Take. Cuz, I love ya, but you’re trying too hard here. Imagine a Stanley Cup contender…say, Detroit. Do you think John Erskine is going to be playing on that team? The guy’s a warrior, and he does some of the dirty jobs that teams have to have done to win, but he’s probably not going to hold onto a regular spot in the lineup if/when the young guys coming up are ready. With Steve Eminger gone and Brian Pothier still on the shelf, he could get some regular time early, but he could lose playing time to Karl Alzner as time goes on this year, even though Alzner is an entirely different kind of defenseman.
The Peerless’ Take: Last year was the first year in Erskine’s career in which he played more than half his team’s games and finished on the plus side of the ledger (he was -15 in 60 games split between Dallas and the Islanders in 2005-2006). Does that mean anything? We’re trying to figure that out. Perhaps at the age of 28, having passed the 200-games played mark in his career, and playing at least semi-regularly, he’s reaching his peak as a player. When you average playing 34 games a year in your first five seasons, it might be a reflection of the tenuous hold on an NHL roster spot that talent permits, and it might be an indicator that a player hasn’t had enough time to establish a presence at the NHL level. Erskine played in 51 games last year and gave a good account of himself in the role of a third pair, physical defenseman. He has a role on this team – he did, after all log almost two full minutes per game more in penalty killing (2:16) than did his blue line teammate, Mike Green (0:20). This is not to say Erskine is of equal value, only that he has played – and can play – a part that contributes to success on this team…a guy who will give a good effort for 14-16 minutes a night, kill some penalties, wreak some havoc among opponents, stand up for his teammates, and give the top four guys a breather without putting the club at a disadvantage. It’s a role that is underrated.
Projected: 54 games, 2-8-10, +2
Posted by The Peerless at 10:49 PM 1 comment: 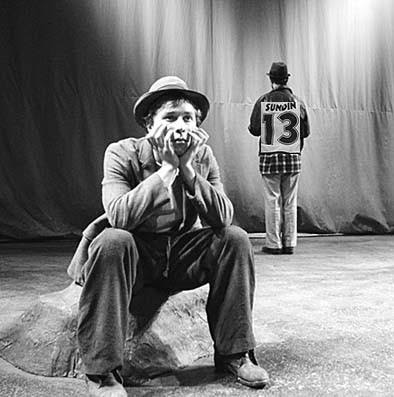 Well, here we are, almost at the start of a new NHL season, and there is one question on everyone’s lips…
“Does Alex have a new girlfriend?”
No, Cheerless, “will Mats Sundin play this year?” Will he? Won’t he? If Mats announces his decision in the forest, will it make a sound? Will he make a decision at all? Hard to tell, looking back over the summer…
"I played 17 years in this league…I just hope people will respect that I'm not ready to make a decision. I feel I've earned that right to make the decision when I feel it's good for myself."

"It's a lifestyle that is very intense…It's all hockey. Once training camp starts, you do nothing but eat and sleep hockey and you play every day. You have to make sure you're committed for that."

"I will not make up my mind before the season starts…That's how I feel right now. Others have started playing in the middle of the season. If I would feel like retiring I would say it."

"I wish I had a date or a timeline in which I could tell everyone what I'm going to do. But I don't know. So I can't say anything yet."

-- September 3rd (Globe and Mail)
*****
"I'm just trying to bring my mind to a point where I can make a good decision whether or not I'm going to play hockey right now..."

"I never had a deadline. I know there was talk about the first of August, but I never said. I said sometime in August hopefully I'll be able to make a decision..."

“I have a lot of options I can explore…And I think I still remain (with the idea) that I want to end my career as a Toronto Maple Leafs. Saying that, though, the way the situation is right now, I don't have everything in my control, either. There's got to be a mutual agreement there…I felt very strong on the ice this year, and I felt I had as good of a year as I've had in my past 10 years, maybe. Maybe that would be an argument for me to play next year…The biggest decision that I have right now is to make sure that I feel that I'm physically and mentally ready to train for another season to continue my career, (And) to see what's going to happen with the Toronto Maple Leafs. And after that, I think we'll go from there."
-- June 21st (USA Today)
*****
One feels that we’re in the middle of a play about waiting for somebody…
Estragon: Charming spot. Inspiring prospects. Let's go.
Vladimir: We can't.
Estragon: Why not?
Vladimir: We're waiting for Sundin.
Estragon: Ah!...You're sure it was here?
Vladimir: What?

Estragon: That we were to wait.

Vladimir: He said by the tree. Do you see any others?

Estragon: What is it?

Vladimir: I don't know. A willow.

Estragon: Where are the leaves?

Vladimir: It must be dead.

Vladimir: Or perhaps it's not the season.

Vladimir: A—. What are you insinuating? That we've come to the wrong place?

Estragon: He should be here.

Vladimir: He didn't say for sure he'd come.

Estragon: And if he doesn't come?

Estragon: And then the day after tomorrow.

Estragon: And so on.

Vladimir: The point is—

Estragon: Until he comes.

Email ThisBlogThis!Share to TwitterShare to FacebookShare to Pinterest
Labels: sundin 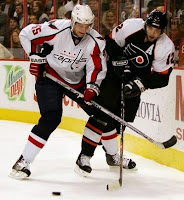 Jeff Schultz
Last Year: 5-13-18, +12, 61 hits
Career Average (per-82 games): 4-12-16, +13, 66 hits
Fearless’ Take: Let’s start with a fun fact from last year. As you’ll note above, Schultz was credited with 61 hits in 72 games. Did that put him among the leaders in the league? Nope, but it’s more than Sean O’Donnell (54 in 82 games), Willie Mitchell (49 in 72 games), Tom Gilbert (27 in 82 games), and Scott Hannan (58 in 82 games). Even Chris Pronger – In height and weight almost a double of Schultz, with a far bigger reputation for physical play – had 74 hits in 72 games. This is not to make a point that Schultz is far more physical than some Caps fans give him credit for being, but neither is he the nice guy on skates those fans seem to think he is, either. He held his own on last year’s club in a lot of areas: hits (5th), blocked shots (3rd), goals, (T-2nd), assists (3rd), points (3rd), ice time (4th among players with more than 40 games played). Not bad for a guy with only 110 games of NHL experience and one full season on a club that made the playoffs. And his role grew as the stakes got higher. He averaged just over 20 minutes a night (compared to his season average of 18 minutes a night) in 11 games to close the season before he was injured in the regular season finale. He is only 22 years old…he’ll get better.
Cheerless Take: It’s not that Schultz is bad; he’s not, but geez, cuz…the Caps already have enough guys who don’t do a great job of clearing the crease. They need someone to take the backsides from in front of their goalie’s face. Mike Green isn’t that guy (although he had 33 more hits than did Schultz), and Tom Poti probably isn’t, either. Until Joe Finley comes to town, Schultz is the best candidate. And before we get all smitten with his offense, he had four of his five goals over a six game stretch last year. He had one goal over his last 45 games.
The Peerless’ Take: OK, here’s another fun fact. After Christmas last year, Schultz only had seven “minus” games for the remainder of the year (in 43 total). He doesn’t get a lot of minutes against the opposition’s top pair, but his total minutes suggest he’s seeing time against players who have some offensive capability, and he logged almost as much penalty killing time per game (3:10) as did Shaone Morrisonn (3:25). Using Alan Ryder’s HockeyAnalytics ratings, he was among the top dozen penalty killing defensemen in the league last year. What he brings at this point in his career is a sense of being able to play within his capabilities. He doesn’t go for the big hit or the big rush. He plays angles well, he doesn’t take silly penalties, and he moves the puck capably. Here’s a prognostication for this year…as much as Mike Green emerged on the offensive side of the ledger last year among defensemen, Schultz is going to be that player on the defensive end this year for the Caps. He was fourth on the club in even strength time on ice last year, third in short-handed time. While he remains something of a work in progress, he’ll get bigger shares of ice time this year, and it will be a reflection of his maturity in his own end. We suspect, though, that Caps fans (some of them, anyway) will continue to bemoan his not being a big hitter. It won’t keep him from getting a considerable raise next summer when he is a restricted free agent.
Projected: 3-14-17, +15
Posted by The Peerless at 9:46 AM 2 comments: