My heavens, it's like a Louisiana runoff election.* But you are invited to go and vote in the second round of the Great Capitals Blogosphere Blog-Off over at The NHL Arena.

Vote early, and vote often for your favorites.

Posted by The Peerless at 8:47 AM No comments:

That's a combined record of 51-18-12, and these teams have outscored their opponents 289-226. Quite a start to the season for the organ-eye-zation.

with thanks to johnwaltonhockey.com
Posted by The Peerless at 8:21 AM No comments:

The Precision of Mike Green 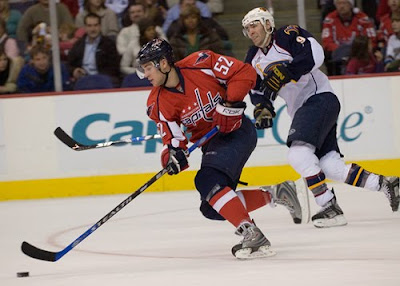 Too offense-oriented, not good enough in his own end, occasionally lazy with the puck. Blah-blah-blah. Those are the usual complaints about the play of Mike Green, who is the best offensive defenseman of his generation and who is a very underrated defender.
But there is something else about Green that is nothing short of amazing in the numbers he has posted to date. And that is precision. He is on precisely the scoring pace and the plus-minus pace this year that he finished with last year. You will recall that Green played in 68 games last year (missing 14 games to two separate bouts with shoulder injuries and a case of the flu). He finished 31-42-73, plus-24. At his current pace this year, if he was to play in 68 games he would finish 12-61-73, plus-24.
That he's getting there in a way very different from last year speaks well to Green's ability to adapt his game to what is there, and what isn't. What hasn't been there in as many instances this year is the weak-side pinch that would allow him to sneak behind the defense, take a pass, and rifle it over the goalie's glove. So what he is doing this year is that he is still getting pucks to the net (he's tied for the league lead in shots on goal among defensemen), but doing so in a way that gives others the chance to pounce on rebounds. And, he is otherwise getting the puck to the bevy of talented scorers the Caps have elsewhere on the roster.
Last year, Green was noteworthy for setting a record for consecutive games with a goal by a defenseman and for scoring 31 goals overall. This year, he is on a pace to tally 72 assists (if he was to play in all of the Caps' remaining games), far surpassing the second highest total by a defenseman in the last decade (64 by Nicklas Lidstrom in 2005-2006).
An extraordinary talent who takes advantage of his opportunities, shows an ability to adapt his game to those opportunities, and play within himself more than perhaps he is given credit for makes for an extremely valuable mix of skills for any team. Whether the Canadian Olympic team would be foolish to leave him off their roster is another discussion, but insofar as the Capitals are concerned, Green's value is very much appreciated.
Posted by The Peerless at 7:00 AM 2 comments: