The Peerless Prognosticator is BACK ON THE AIR!!! -- Caps vs. Sabres, March 3rd

Tonight the Caps line up to begin its own version of a short track speed skating sprint to the finish – 20 games left, an 11-point lead on the rest of the conference. But before that, all eyes of hockey fans will be glued to their iPhone, iPad, iWishThey’dStopWithThe-iStuff screens in anticipation of the last hours of the trading window for this season. Who will our favorite teams pick up? Which rentals are out there for a bargain price? Speaking of rentals and short-timers, we here in DC are familiar with the breed, and we asked three such players of recent vintage to share with us their wisdom on the care and feeding of the player who might not be here very long…

Drew Gooden, you were traded to the Wizards on February 13th, and then you were sent along to the Los Angeles Clippers four days later. And it’s not as if you’re a stranger to such things – the Clippers are your ninth team in eight years. What advice might you have for any player the Caps might pick up for the last three months of the season?

“Oh, and you really don’t want to get a Costco membership, unless you want to be hauling the 36-pack of toilet paper from city to city.”

Paul Lo Duca, you spent seven months here in DC after you were signed as a free agent. So, you’re not technically a rental, but you sure have experience in not spending much time here. Any advice for the players the Caps might pick up today?

“No, but tell me, is Bowden still there?”

No, he was relieved of his duties with the Nats last year.

“Damn… I was kinda hoping he’d sign me again.”

Curtis Leschyshyn… you came to the Caps from Colorado on November 9, 1996. Then you were shipped out to Hartford a week later. You played in two games for the Caps. Two games. Two penalty minutes. Two goals were scored while you were on the ice, on for and one against. Any advice?

“I was in Washington?”

Tonight, as we wait on the last day of the trading deadline to see if the Caps are in the rental market, the Caps return home to host the Buffalo Sabres. As the teams take NHL ice once more, here is how their numbers (prior to last night's action) shake out.. 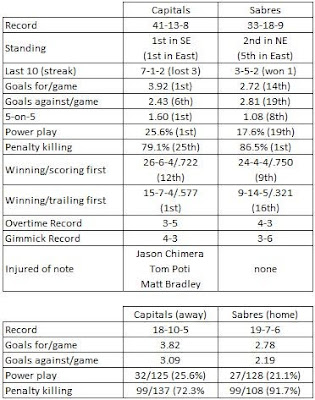 It is likely to be the first game back in a Sabres jersey for the MVP of the Olympic men’s ice hockey tournament, Ryan Miller. In the Olympic tournament Miller finished tied for first in wins (five), second in goals against (1.35), first in save percentage (.946), and second in minutes played (355:07). Those rankings are entirely consistent with what he put together in the NHL before the break: seventh in wins, second in goals against, second in save percentage, and eighth in minutes played.

The trick now is to avoid two things: a post-Olympic letdown and fatigue. As we noted in our look at the big questions concerning each team, the minutes he added in the Olympics would push him almost to the minutes he played last year (he is ten minutes short of that mark). We also noted that the additional work he would get in the home stretch…

For our purposes tonight, though, Miller has been less lucky than good concerning his performance against the Caps this year. Despite his having a 2.35 goals against, a .935 save percentage, and one shutout, he has a 1-2-0 record against Washington this season.

Part of the reason Miller’s record against Washington looks inconsistent with his statistics is that the Sabres have scored only five goals in three games against Washington themselves, and they were shutout once. It is a problem that isn’t limited to Buffalo’s games against the Caps. This is a club that has one 50-point player, no 20-goal scorers, and since smacking Phoenix 7-2 on January 18th has averaged only 2.43 goals a game over the last 14 games.

Over that span the Sabres have shown their characteristic scoring balance – 16 players share the 34 goals the team scored. But 11 of them came from the sticks of Derek Roy (six) and Thomas Vanek (five). Buffalo isn’t getting a lot of strong secondary support. No other player has more than three goals in that span.

Roy bears watching. He doesn’t have a goal in three games against the Caps this season, but he does have three assists that brings his career scoring to 9-10-19 in 21 games against Washington. But here is something else Caps fans might look for. Roy, who averages a little more than half a minute of penalty time per game against the other 28 teams in the league, has 18 minutes in infractions in 21 career games against the Caps.

Vanek is still trying to find the spark on a consistent basis that propelled him to 43 goals in 2006-2007 (and a huge contract offer from Edmonton as a restricted free agent thereafter, which the Sabres matched). He has 18 goals in 56 games this year to lead the club, which is probably what the Sabres were thinking would be the case, just not with such a low total. He has been held without a point in two games against the Caps this year and is 6-5-11 in 18 career games against the Caps.

The right winger had a two goal, three-point night against Phoenix on January 18th, but since then is 3-8-11 in 14 games. The helpers represent a solid number, but the Sabres could use some more punch from him to help relieve the burden on Miller at the other end of the ice. In three games this year against the Caps he has three assists, but no goals. He does seem to have had a knack for being clutch against the Caps in his career though, even if his numbers (5-8-13 in 18 games) don’t jump off the page.

After having a difficult final week in Vancouver, Ovechkin now takes the ice in front of fans who had little use for him before the Olympics. His reception is not going to be warm. But Ovechkin does have 13 goals in 18 career games against the Sabres, including two in three games so far this year.

1. Fast start. The Caps lead the league in first period goals (72), but getting off to fast starts has been lacking in recent games leading up to the break. Buffalo is not an especially adept team playing from behind (18th in winning percentage when scored on first, 15th when trailing after the first period). Get out in front, take the crowd out of it, and don’t let the Sabres put the game in Miller’s hands.

3. The Letter “D.” In the February portion of the schedule, the Caps allowed 28 goals in seven games. It doesn’t take anyone especially well versed in the fine points of hockey to figure out that 4.0 goals allowed per game isn’t good, even if you did go 4-1-2 in those games. It isn’t a recipe for success, and against a team that doesn’t have a lot of pop, allowing four goals would suggest that there are some serious bad habits creeping into the Caps’ game, time off or no time off.

In the end, the Caps are better and more rested in the key positions – their Olympians ended their participation about week ago, while Ryan Miller – on whose performance the Sabres’ season depends – was playing Sunday afternoon. Getting off to a good start will stick a pin in the balloon that is the hopes of New Jersey, Ottawa, Pittsburgh, and even Buffalo of catching the Caps for the top spot in the east. And a good start begins now…