Not even God had this Frozen Four in His bracket 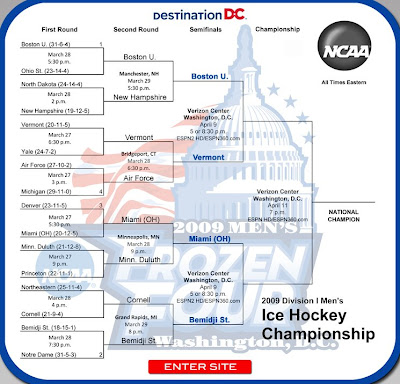 For the record, we managed only to have one correct entry in the Final Four -- Boston University. Out bracket was pretty much blown up in round one, when we only had four of the eight games picked correctly.

What is amazing about this Frozen Four, though, is that of 12 games played thus far in the tournament, three have gone to overtime, and four games featured goals scored in the last 20 seconds of regulation to win or tie the contest, two of those with less than one second remaining.

Based on the pair-wise rankings of the clubs, numbers two through eight are gone (Boston University being the only ranked club remaining).

If you have tickets for the Frozen Four at Verizon Center, be prepared to pay the babysitter overtime. It could be a couple of long evenings.

* Bemidji State is located on the western shore of Lake Bemidji in Minnesota, which happens to be the northern most lake feeding the Mississippi River.