The Peerless Prognosticator Brings You the Bracket to Break All Brackets

The 2015 NHL playoffs are about to begin, and hockey fans are filling out their brackets, using pencils left over from March Madness and making changes using the tears of University of Kentucky basketball fans).

The cousins and I put our heads together (seriously, Cheerless head-butted both Fearless and myself trying to get the bracket all to himself so he could pencil in the Cleveland Barons as Stanley Cup champion) and came up with a truly inspired bracket for our entry in the NHL Bracket Challenge... 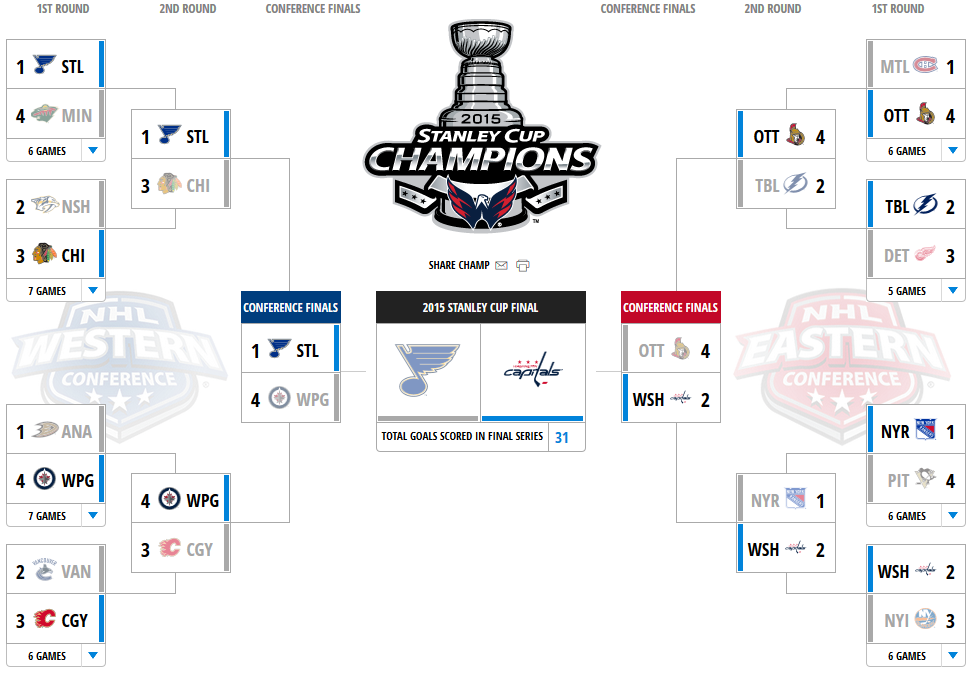 
We're thinking that in the first round...

In the second round...

In the conference finals...

When all is said and done, Alex Ovechkin gets the prize that eluded him for ten years, and no one is going to be ignorant of who Nicklas Backstrom is and his place among the game's best.

There once was a sit-com on network television that featured the clumsy antics of a low-rated cable network do-it-yourself show host.  One of the continuing features of “Home Improvement” was the appearance of the boys from “K&B Construction,” professional tradesmen who were skilled at their craft, if a bit odd. 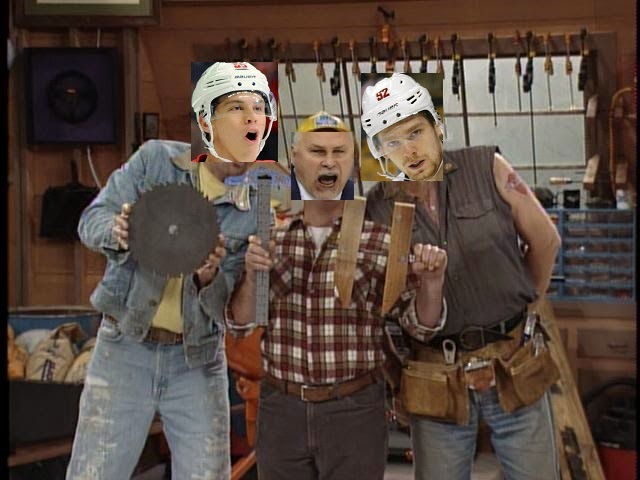 Perhaps the answer lies with their own “K&B” boys.  Evgeny Kuznetsov and Andre Burakovsky have had their ups and downs as rookies this season, but with a full regular season in the book (granted, Burakovsky appeared in only 53 games) they have become accustomed to the pace of the NHL game.

The playoffs are a different animal, but so, too, might these two rookies.  The Caps are one of two Eastern Conference playoff teams (Ottawa is the other) with two rookies among the top-20 rookies in points.  Kuznetsov finished ninth in rookie scoring (11-26-37), while Burakovsky finished in a tie for 20th (9-13-22).  Both finished in the top-15 among rookies in points per game.

Burakovsky’s availability is in question (he may be assigned to Hershey for their playoff run), but Kuznetsov could get time as a scoring line center.  He certainly has stepped up his scoring pace in the second half of the season.  In his last 36 games, Kuznetsov went 7-15-22, plus-5, a 50-point scoring pace over a full 82-game season.  He accomplished that despite having no games in which he skated as many as 20 minutes and skating fewer than 15 minutes a total of 21 times, largely in fourth line duty.

As noted, Burakovsky’s presence in the post-season is iffy (his call-up from Hershey late in the season was an emergency sort, owing to an injury to another player).  However, at season’s end, among Capitals appearing in at least 20 games, Burakovsky had the second highest points-per-60 minutes at 5-on-5 (2.07; numbers from behindthenet.ca).  He also had the team’s best shooting percentage in those situations (10.9 percent) and its third best PDO (1022).  Although he had somewhat sheltered minutes (64.3 percent offensive zone starts, tops on the club), he was productive when called upon.

One does not expect either Kuznetsov or Burakovsky to dominate in the post season.  After all, Nicklas Backstrom is the only Capital, age 22 or younger, to ever have averaged more than half a point per playoff game in a post season, minimum of ten post season games played (Kuznetsov is 22; Burakovsky is 20).  However, to the extent they can surprise with some timely offense, the “K&B Boys” might be the right tools for the job of getting the Caps past the Islanders and deep into the 2015 post season.