We have taken a look at five players who dressed for one game with the Washington Capitals on their respective NHL journeys: Rod Seiling, Shawn Cronin, Ryan Stanton, Chris Ferraro, and Barrie Moore.

As a group, these nine players left no obvious footprint in Caps history, but even if it is just one game, it is the realization of a dream just about any kid had when they were still learning how to skate.  Who were these players?  Let’s start with two who took their turn with the Caps in the 1970’s. 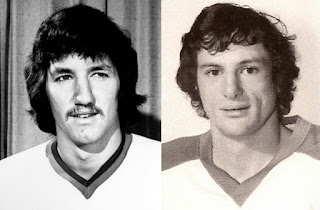 As one might expect of a player who would dress for only one NHL, game, right winger Brian Stapleton was not drafted by any NHL club.  After spending three years at Brown University, he joined the Fort Wayne Komets of the IHL, posting a respectable 14-19-33 scoring line in 69 games.  It was enough to get the attention of the Caps, who offered him a three-game tryout in October 1975.  Despite improving on his numbers skating with the Dayton Gems in the IHL in 1975-1976 (he would go 26-34-60 in 74 games with the Gems), he would not get a chance to pull on a Caps sweater until Game 73 of the season.  By that time, the Caps’ sophomore season in the NHL was a lost cause.  They had yet to win consecutive games in the first 72 games of their schedule (in fact, had yet to post consecutive wins in their entire short history to that point), posting a 9-54-9 record before hosting the Kansas City Scouts in late March.

Kansas City was not much better.  You could argue that despite their 12-49-11 record heading into their game with the Caps, they had become the inferior team.  They had not won a game since February 7th against, you guessed it, the Caps, and they had not won a road game in the entire 1976 portion of their schedule to that point, going 1-27 with seven ties.  It looked as if the Scouts would make it two in a row over the Caps and break a 19-game winless streak, carrying a 5-2 lead in the third period.  But the Caps scored three goals in rapid succession to tie the game, and fittingly, 5-5 is how the game ended.  The Scouts would go on to finish the season without a win over the remainder of their schedule, going 0-21 with six ties in their last 27 games.  Stapleton did not record a point against Kansas City and was a minus-2.  He would return to the minors for one more season, going 20-46-66 in 68 games with Dayton before his pro hockey career ended at the age of 25.  Stapleton did have one remarkable aspect of his career.  He was the first alumnus of the Brown University hockey program to reach the NHL.

Capitals fans will remember Dennis Maruk as being one of the most prolific goal scorers in club history.  In 343 games with the Caps, Maruk scored 182 goals, including a 50-goal season in 1980-1981 and a 60-goal season the following year, the first player in club history to hit the 50 and 60 goal marks for a single season. What Caps fans might not remember is that the team selected center Alex Forsyth three spots ahead of Maruk, taken by the California Golden Seals, in the 1975 amateur draft.  The pick seemed to have merit, Forsyth having posted 27 goals in 64 games with the Kingston Canadians in the Ontario Hockey Association.  But on the other hand, Forsyth lasted until the ninth round of the 1975 World Hockey Association draft, taken 122nd overall by the San Diego Mariners.

After being drafted by the Caps, he joined the Richmond Robins of the AHL, where things did not come quite so easily.  He was just 7-16-23 in 71 games for the Robins, although he did go 2-5-7 in eight postseason games with Richmond.  The following season, Forsyth got his chance with the big club, dressing in his first NHL game before reaching his 22nd birthday.

That chance came on November 12th against the Chicago Blackhawks, and it came at what was an historic period for the club.  The Caps had gone 172 games in their short history without having won consecutive games.  But after stumbling out of the gate in the 1976-1977 season with a 2-8-2 record, they pieced together a three-game winning streak, hoping to make it four in a row with Chicago visiting Capital Centre.

Alas, the Caps could not extend that winning streak to four, dropping a 5-4 decision to the Blackhawks.  For his part, Forsyth had a clean line on the score sheet – no goals, no assists, no points, even in plus-minus, and no penalty minutes.  He would go back to Springfield in the AHL, where he went 14-33-47 in 74 games for the Indians.  The following season he skated for the Tulsa Oilers of the Central Hockey League.  He went 15-16-31 in 69 games for the Oilers and was held without a point for Tulsa in the postseason.  It would be Forsyth’s last season in pro hockey, over at the age of 23.

The odd thing about Forsyth and the 1975 amateur draft is that he was one of two players taken by the Caps before Dennis Maruk was taken by California.  Defenseman Peter Scamurra was taken with the pick after Forsyth by the Caps, he playing 132 games for the Caps in his four-year career in the NHL, all with Washington.