The Peerless Prognosticator is ON THE AIR!!! -- Game 7: Capitals at Canucks, October 29th

The Washington Capitals will take the ice in the second of a four-game road trip through western Canada when they visit Vancouver on Saturday night to face the Canucks.  The Caps will be looking to start a winning streak after losing consecutive games to the New York Rangers and Edmonton Oilers, while the Canucks will be trying to end a three-game losing streak (0-2-1) after starting the season with four wins.

Vancouver has not been an especially hospitable place for the Caps.  Their 3-2 win over the Canucks last October was their first since they skated off with a 4-3 overtime win in February 2001, breaking a six-game losing streak in British Columbia (0-5-1).

Through seven games, the Canucks have not been an especially dominating offensive team.  In fact, they are anemic in that regard.  They scored more than three goals just once, and that was in an overtime win (4-3 over Carolina on October 16th) and average just 2.00 goals per game, last in the league.  The difference in their four-game winning streak to start the season and the three-game losing streak they bring into this game is in allowing goals.  The Canucks allowed just six goals in their four wins, but they allowed ten in their three losses.

Vancouver’s offense, such as it is, comes from the usual suspects – the Sedin brothers, Daniel and Henrik.  Now 36 years of age, the twins show little evidence of slowing down.  Daniel, the left winger of the pair, recorded 28 goals last season, the most he had since he finished with 30 in 2011-2012.  In fact, since he had 12 goals in the season that followed, the abbreviated 2012-2013 season, his goals have increased with each year (from 12 to 16 to 20 to 28 last year).  He is in a bit of a rut, coming into this contest having posted consecutive games without a point for the first time this season.  Daniel is 7-6-13, plus-3 in 16 career games against the Caps.

To the extent the Canucks have had their troubles, it has not been a product of goaltending.  The only difference between the performances of Ryan Miller and Jacob Markstrom thus far has been the scoring support in front of them.  Their goals against averages are almost identical (Markstrom: 1.95; Miller: 1.97), as are their save percentages (Markstrom: .923; Miller: .933), the difference between them being one goal Markstrom allowed that, had he stopped it, would leave him with the same save percentage as Miller.  Perhaps that goal was the game-tying goal he allowed to the Los Angeles Kings in his last time out that led to the only blemish on his record, a Gimmick loss that left him 3-0-1.  On the other hand, Miller is just 1-2-0, but he’s had just three goals of offensive support in three games.  His lone win came in the trick shot competition, a 2-1 win over the Calgary Flames in the season opener.  Markstrom is 0-3-0, 3.97, .875 in three career appearances against the Caps, while Miller is 17-14-0, 2.54, .916, with three shutouts in 32 appearances against Washington. 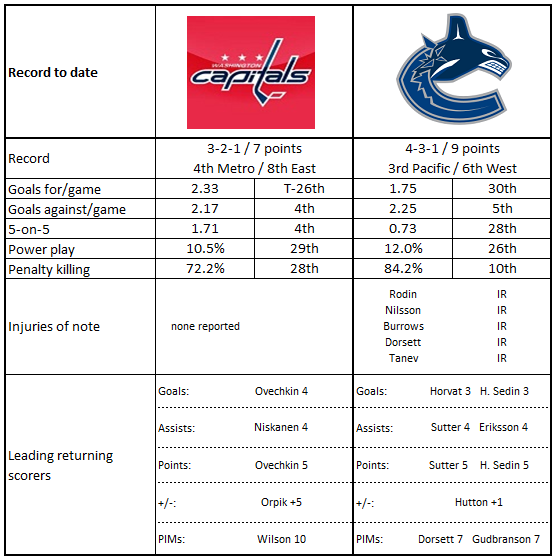 1.  Goals in general are hard to come by in games involving the Canucks.  So far, only the New Jersey Devils (4.17 total goals) feature fewer total goals by both teams per game than the 4.29 in Canuck games.

2.  Vancouver is last in the league in shots on goal (24.9), leaving little in the way of surprise as to why they are last in scoring offense.

3.  The Canucks are 28th in the league in home power play efficiency (6.3 percent on 1-for-16).  One of the teams below them (Carolina) has not yet played a home game.

5.  All of Vancouver’s wins so far are of the one-goal variety (tied for most one-goal wins in the league).  They have not yet won a multi-goal decision (0-2-1).

1.  The Caps are coming into this game looking to avoid losing three straight games in regulation time since Games 61-63 of the 2014-2015 season (to Philadelphia, Pittsburgh, and Carolina).

2.  Alex Ovechkin is on a four-game goal streak. The last one of those he had was in Games 49-52 last season (against Philadelphia, Nashville, Minnesota (a hat trick), and Dallas).  The last time he had a longer streak was in the five games to start last season.  Coincidentally, the fifth game in that five-game streak to open last season came against the Canucks in Vancouver.

4.  The Caps have scored first in five of six games so far, but they have just three wins in those games (tied for 13th in winning percentage…don’t make a lot of that at this point of the season).

Last season was something of a lost year for center Brandon Sutter. After being traded by the Pittsburgh Penguins to the Vancouver Canucks along with a third-round draft pick for Nick Bonino, Adam Clendening, and a second-round draft pick, he played in just 20 games for the Canucks last season, losing 33 games to a hernia and the last 29 to a broken jaw from a puck to the face barely a week after he returned from his hernia injury.  He finished the season 5-4-9 in 20 games, about the same scoring pace he had in his last season in Pittsburgh in which he tied his career high in goals (21) and recorded more than 30 points (33) for the first time in three seasons.  He has started quickly, points-wise (five points, tied for the team lead), even if his goals are few (one so far).  He comes into this game with his first consecutive games of the year without a point and his first two “minus” games.  Sutter is 3-6-9, plus-5, in 32 career games against the Caps.

Fourth liners scoring goals is unusual.  Fourth liners having a multi-goal game is shocking.  Such was the case for Daniel Winnik when he recorded both of the Caps’ goals, including the game-winner, in a 2-1 win over the New York Islanders on October 15th.  However shocking that might be, it is usually the fans who are shocked.  In this instance, Winnik appears to have sustained something of an after-shock.  In four games since his outburst, he does not have a goal, he does not have a point, and his has just one shot on goal.  On the other hand, the lack of scoring hasn’t been accompanied by being a liability in the defensive end.  Winnik is “even” in each of his last four games, and he remains a positive Corsi player at 5-on-5 (51.35 percent; numbers from Corsica.hockey).  Players can contribute in many ways.  He is 6-7-13, plus-10, in 30 career games against the Canucks.

Six games is 7.3 percent of an NHL season.  In that respect, losing a couple of games in a row is no reason for panic.  And, as if it means much just 7.3 percent of the way through the season, the Caps are still a wild-card team.  But this is an interesting stretch of games coming up for the Caps, staring in Vancouver.  The Canucks have lost three in a row (pending their game against Edmonton on Friday night), Calgary is 3-4-1, Winnipeg (with whom the Caps have a home-and-home coming up) are 3-4-0, and Florida is 3-3-1.  These are all winnable games, but the Caps need to improve on both sides of special teams and generally give their goalies more support than they have thus far received.  It’s only “early” for so long.