"I had the right of way, going across the pedestrian line, and I saw there was a gold Tahoe or Yukon was trying to get in the left lane to turn, and decided to turn, and in the corner of my eye, I saw it and jumped up and took the brunt of it. I did a nice roll and dismount. It was OK. It was weird, like slow-motion. I just reacted by bracing myself by jumping up and taking the brunt of the force and just rolling. Got up, realized I was OK, was like, 'Is this going on for real?' Then I threw out some profanities at the guy."

That was Islanders defenseman and former Capital Brendan Witt, who was struck by an SUV getting his morning coffee yesterday. A witness to the incident said:

"Boy, that guy is tough. It was like seeing Clint Eastwood, but in hockey. I really thought a Hollywood movie was being made. I was looking around for cameras. I can't believe how tough this guy is. It's insanity."

Witt did play last night in the Islanders' 6-2 loss to the Flyers. He played 17 minutes, finishing even with two blocked shots and two hits...

The Peerless Prognosticator is ON THE AIR!!! -- Caps vs. Sabres, December 9th

We are live at Peerless Central as the Caps take it on the road again, this time in Buffalo to take on the Sabres. And unlike Philadelphia, where it’s always sunny, in Buffalo, it’s either snowing or about to snow. Unlike Buffalo, however, where people actually lead their lives when the precip hits the fan, as it were, folks in Washington run to their local grocery store for all sorts of necessities and to their hardware store for shovels, snow blowers, plows, flame throwers, and more salt that you’d find in the flats of Utah.

But when all is said and done, folks head home and are in need of entertainment. It just so happens that your Uncle Peerless has the perfect game that hockey fans can play while gathering around the TV to watch the Caps. Now, before we get too far along, send the kids out of the room. We’ll wait…

OK, now before your minds get away from you, this isn’t some weird Tiger Woods kind of “Spin the Mistress” sort of game. This is a game called, well… “Buffalo,” and it involves adult beverages. The rules are rather simple, but you have to know which hand is which, so to speak…

First, you can hold your drink with either hand, but may only drink from it with the weaker of your two hands (for example, if you are right-handed, you must drink with your left). If any other Buffalo players spot you drinking with your dominant hand, they call “Buffalo” on you, and you must finish your drink as quickly as possible. If you hesitate to finish your drink, the other players will usually proceed to make a ruckus chanting "Buffalo!" and banging on the table until you finish.

Next, If you call a false “Buffalo” on somebody (call “Buffalo” when they are actually drinking with the proper hand), you are obligated to finish your own drink. Special care must be made when drinking with left-handed Buffalos because of this rule.

Last, once you begin playing Buffalo, you are playing it for the rest of your life, sort of like Lindy Ruff playing “coach” in, well, Buffalo.

You and your friends (of suitable drinking age) can play this game while watching the Caps dismantle the Sabres and dismantle a case or two of adult pops in the process.

Hey, I'm not making this stuff up. What?... You'd rather play Parcheesi?

The Caps are set to play Buffalo (the hockey team, not the game) tonight in an attempt to extend their winning streak to seven games. Buffalo will be a formidable test, despite the fact that the Caps dispatched the Sabres by a score of 2-0 in their only previous meeting this year. So far this year, the tale o’ the tape (numbers going into last night's action) for these teams suggest a closely fought contest is at hand… 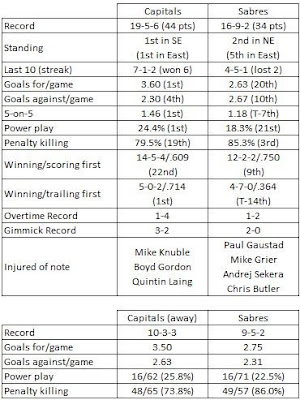 Since the last meeting between these teams, Buffalo has gone 4-2-0, winning their first four of those games and sitting on a two-game losing streak. The one constant in those six games has been the play of goaltender Ryan Miller. Miller got the call in all of them and allowed more than two goals in only one of them (4-2-0, 1.34, .959, one shutout). Miller has, in fact been the rock upon which the Sabres’ season has been built to date. In 24 appearances to date, Miller has allowed more than two goals only five times and more than three only twice. The Caps are not one of those teams to solve Miller for more than two goals, scoring only two in the 2-0 win over Miller and the Sabres on November 25th in Semyon Varlamov’s first NHL regular season shutout.

Since the Caps and Sabres met last, Buffalo has been led in scoring by right wing Jason Pominville (2-4-6) and rookie defenseman Tyler Myers (0-6-6). Pominville had a four game points streak snapped on Monday when the Sabres became Martin Brodeur’s 103rd career shutout victim (Brodeur tying Terry Sawchuk’s NHL shutout record), 3-0. In 16 career games against the Caps he is 5-5-10, but he was held off the score sheet in the team’s first meeting this year.

Myers, on the other hand, is making a case for Calder Trophy consideration. He is second among all rookie defensemen in scoring and is tied for third in plus-minus. He is second only to Victor Hedman in ice time among rookie blueliners, tied for fourth in hits, and is second in blocked shots.

It’s hard to single out any Sabre for being cold. As has been the case over recent years, this is a team characterized by considerable offensive balance. Over the last six games, the Sabres have gotten that. Seven players are tied for the team lead in this stretch with two goals apiece. Eight different players have at least four points.

The Sabres cannot be thought of, generally speaking, as a “gritty” team. In the “gritistics” (we just made that up), on home ice Buffalo ranks as follows:

1. If it ain’t broke, don’t fix it. The Caps have done it with offense and defense, with stars scoring and support players scoring, with goaltending and discipline. On their six-game winning streak they have outscored teams 25-9, their power play is 9-for-31 (29.0 percent), and their penalty killing has gone 20-for-23 (87.0 percent). There isn’t much there to tweak.

2. Three’s the Key. The Sabres are a team that places an undue burden on its goaltender to win games. The Sabres are 1-7 in games where they allowed more than two goals, and they are on a seven game losing streak in that regard.

3. The Other Alex. Alexander Semin has struggled against the Sabres like no other team. Against teams he has played in at least ten games, Semin has fewer points against Buffalo (1-1-2 in 11 games) than any other. If he can shake that spell, it’s going to be real trouble for Buffalo.

This really isn’t terribly complicated. The Caps are hot, they have more weapons, they are playing better than the Sabres at both ends of the ice. Miller is almost certainly going to have to hold the Caps to two goals or fewer for the Sabres to win. He’s certainly capable of that (he’s already done it once this year), but the old saying in gaming applies here…

Oh, and remember... drink responsibly, and never, ever drink and drive.
Posted by The Peerless at 6:32 AM No comments: